Overweight middle-aged women who lose weight are much less likely to get breast cancer – even if they put some back on, a study has found.

Scientists from the American Cancer Society and Harvard tracked 180,000 women in their fifties over the course of a decade.

Results revealed women who lost at least 20lbs (9kg) were 26 per cent less likely to develop the killer disease.

And experts found even if they put back on some of the weight they still had a lower risk of being struck down with breast cancer. But the greatest benefit was for women who kept the weight off.

The researchers said their findings suggest it’s ‘not too late’ to prevent breast cancer if a woman has put on some weight from the age of 50. 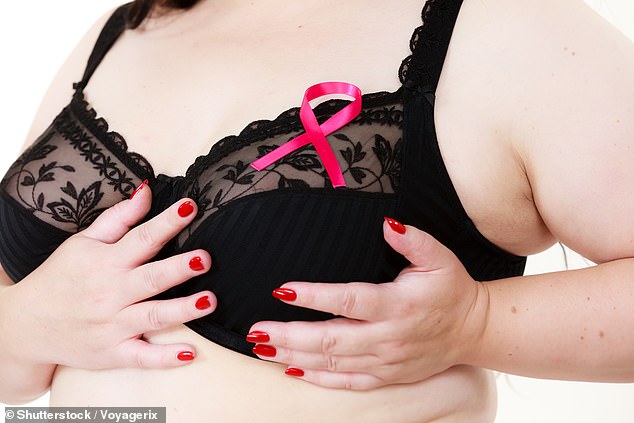 Overweight women in their 50s who lose 20lbs are 26 per cent less likely to get breast cancer – even if they put some weight back on, a study in the US found

Being overweight is a driving factor for breast cancer, particularly after going through the menopause.

This is because oestrogen naturally drops after the age of around 55, but fat cells keep the hormone raised.

Fat cells pump out oestrogen – a hormone which, in excessive quantities, can cause tumours to grow.

Data suggests 12 per cent of obese women will get breast cancer, compared to nine per cent of those in a healthy weight range.

However, until now there has not been adequate evidence to prove if that the risk is reversible by beating the bulge.

The latest study, published in the Journal of the National Cancer Institute, paints a much clearer picture.

Researchers led by Dr Lauren Teras analysed data from women in the US, Australia and Asia.

HOW CAN OBESITY CAUSE CANCER – INCLUDING BREAST?

Obesity and being overweight is the second biggest preventable cause of cancer in the UK- more than one in 20 cancer cases are caused by excess weight, according to Cancer Research UK.

Around 12 per cent of women who are obese will develop breast cancer compared to nine per cent who are of a healthy weight range, Breast Cancer Now states.

This higher risk is because fat cells make oestrogen, and excess oestrogen in the body drives cancer. It can make hormone-receptor-positive breast cancers develop and grow.

After the menopause, the ovaries stop producing oestrogen, so levels in the body drop. But women who are overweight or obese after the menopause are more likely to be exposed to oestrogen created by their fat cells.

Being overweight or obese also alters the levels of other hormones, including insulin, which regulates the amount of sugar in your blood. Higher insulin levels have also been linked to some cancers, including breast cancer.

Generally, obesity is also often associated with an unhealthy lifestyle – eating junk food and not getting enough fruit, vegetables or exercise – factors which are separate but linked and also known to increase the risk of cancer.

Participants’ weight was assessed at the beginning for a baseline.

Sustained weight loss was defined as keeping at least 4.4lbs (2.5kg) off between the middle weigh-in and the end.

Compared to woman whose weight remained the same over the decade, those with sustained weight loss of at least 4.4lbs (2.5kg) had a lower risk of breast cancer.

Women who kept off 4.4-10lbs (2-4.5kg) had a 13 per cent lower risk of getting breast cancer than women whose weight did not fluctuate.

Only those who lost 20lbs (9kg) or more still had a lower risk of breast cancer if they regained some of the weight.

Dr Teras said: ‘Our results suggest even a modest amount of sustained weight loss is associated with lower breast cancer risk for women over 50.

‘These findings may be a strong motivator for the two-thirds of American women who are overweight to lose some of that weight.’

She added: ‘Even if you gain weight after age 50, it is not too late to lower your risk of breast cancer.’

The paper concluded: ‘These results suggest that gaining weight, and then losing it, confers the same breast cancer risk as keeping a stable body weight.

‘In other words, it is not too late to lower your risk of breast cancer if you have gained weight after age 50.’

The risk of breast cancer only lowered in women who sustained weight loss and were also not using hormone treatments such as HRT. It was not clear how many women in the cohort were taking HRT.

Commenting on the findings, Cancer Research UK said it’s not clear if HRT or being overweight is the risk factor for breast cancer in these women.

‘Women with sustained weight loss only had reduced cancer risk if they weren’t taking HRT. And because HRT can increase the risk of breast cancer too, it’s hard to untangle which risk factor is having an effect.

‘There’s not enough evidence yet to know what effect different patterns of weight loss could have on cancer risk.’

The team claim their analysis is the first with a large enough study to help answer the question of whether sustained weight loss can impact breast cancer risk.

Victoria Harmer, a trustee for the charity Against Breast Cancer, said the findings shed more light on weight and breast cancer and are ‘entirely plausible’.