With these neurons, extinguishing fear is its own reward 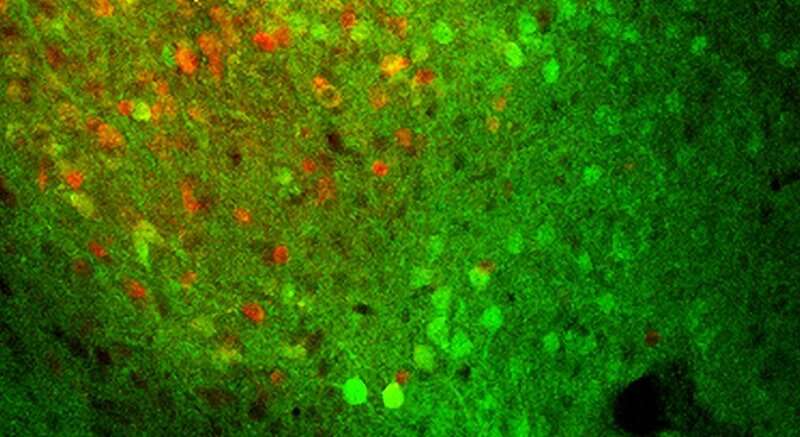 When you expect a really bad experience to happen and then it doesn’t, it’s a distinctly positive feeling. A new study of fear extinction training in mice may suggest why: The findings not only identify the exact population of brain cells that are key for learning not to feel afraid anymore, but also show these neurons are the same ones that help encode feelings of reward.

The study, published Jan. 14 in Neuron by scientists at MIT’s Picower Institute for Learning and Memory, specifically shows that fear extinction memories and feelings of reward alike are stored by neurons that express the gene Ppp1r1b in the posterior of the basolateral amygdala (pBLA), a region known to assign associations of aversive or rewarding feelings, or “valence,” with memories. The study was conducted by Xiangyu Zhang, a graduate student, Joshua Kim, a former graduate student, and Susumu Tonegawa, Professor of Biology and Neuroscience at RIKEN-MIT Laboratory of Neural Circuit Genetics at the Picower Institute for Learning and Memory at MIT and Howard Hughes Medical Institute.

“We constantly live at the balance of positive and negative emotion,” Tonegawa said. “We need to have very strong memories of dangerous circumstances in order to avoid similar circumstances to recur. But if we are constantly feeling threatened we can become depressed. You need a way to bring your emotional state back to something more positive.”

In a prior study, Kim showed that Ppp1r1b-expressing neurons encode rewarding valence and compete with distinct Rspo2-expressing neurons in the BLA that encode negative valence. In the new study, Zhang, Kim and Tonegawa set out to determine whether this competitive balance also underlies fear and its extinction.

In fear extinction, an original fearful memory is thought to be essentially overwritten by a new memory that is not fearful. In the study, for instance, mice were exposed to little shocks in a chamber, making them freeze due to the formation of fearful memory. But the next day, when the mice were returned to the same chamber for a longer period of time without any further little shocks, freezing gradually dissipated and hence this treatment is called fear extinction training. The fundamental question then is whether the fearful memory is lost or just suppressed by the formation of a new memory during the fear extinction training.

These and other experiments suggested to the authors that the hypothetical fear extinction memory may be formed in the Ppp1r1b neuronal population and the team went on to demonstrate this vigorously. For this, they employed the technique previously pioneered in their lab for the identification and manipulation of the neuronal population that holds specific memory information, memory “engram” cells. Zhang labeled Ppp1r1b neurons that were activated during retrieval of fear extinction memory with the light-sensitive protein channelrhodopsin. When these neurons were activated by blue laser light during a second round of fear extinction training it enhanced and accelerated the extinction. Moreover, when the engram cells were inhibited by another optogenetic technique, fear extinction was impaired because the Ppp1r1b engram neurons could no longer suppress the Rspo2 fear neurons. That allowed the fear memory to regain primacy.

These data met the fundamental criteria for the existence of engram cells for fear extinction memory within the pBLA Ppp1r1b cell population: activation and reactivation by recall and enduring and off-line maintenance of the acquired extinction memory.

By establishing this intimate connection between fear extinction and reward and by identifying a genetically defined neuronal population (Ppp1r1b) that plays a crucial role in fear extinction this study provides potential therapeutic targets for treating fear disorders like PTSD and anxiety, Zhang said.