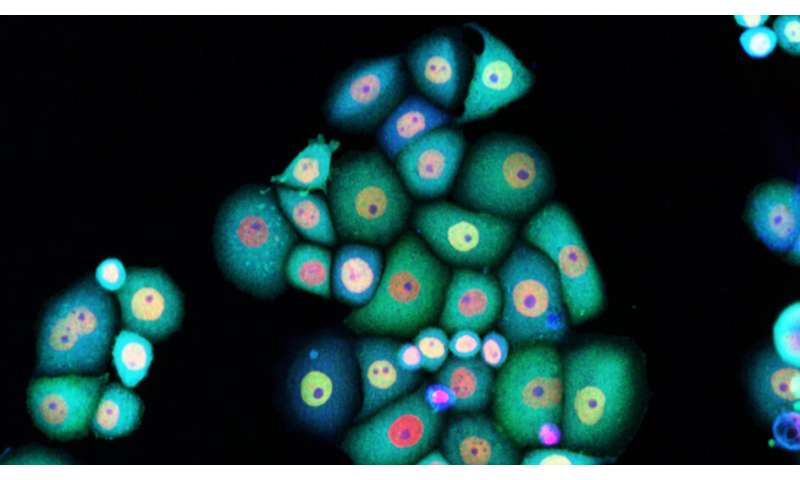 A new test could pick out women with advanced breast cancer who are likely to benefit from an exciting new targeted therapy for more than a year.

Analysing levels of a molecule called cyclin E1 in tumor biopsies could be used to guide breast cancer treatment—helping delay chemotherapy for some women and ensuring others are closely monitored for any signs of progression.

Researchers found that testing for cyclin E1 could predict the chances of a year or more of successful treatment with a drug called palbociclib—a drug hailed by doctors as the biggest advance in breast cancer treatment for 20 years.

Palbociclib targets weaknesses in cancer cells specifically, and so has far fewer side-effects than conventional chemotherapy—allowing women to live well with their cancer.

It comes as NICE last week recommended the use of palbociclib on the NHS through the Cancer Drugs Fund, for women with advanced estrogen receptor-positive breast cancer who have received hormone therapy.

Hormone therapy works against around 70 percent of breast cancers and is one of the most common first treatments for people with advanced breast cancer—so the new approval could significantly increase the number of women who can benefit from palbociclib on the NHS.

The study by the team at the Institute of Cancer Research, London, and The Royal Marsden NHS Foundation Trust, showed that women with low levels of cyclin E1 in their tumors responded to palbociclib given in combination with hormone treatment for nearly twice as long as women with high levels.

The test’s development is described in a study in the Journal of Clinical Oncology.

The study found that the combination of palbociclib and hormone treatment had some benefit for women irrespective of their test results, delaying the need for chemotherapy for at least three months, even in the shortest responders.

But the researchers suggest that women with higher levels of cyclin E1 in their tumors should be monitored especially closely, since they can be expected to stop responding much more quickly than others.

Researchers in the Breast Cancer Now Toby Robins Research Centre at The Institute of Cancer Research (ICR) looked at tumor samples from two different trials involving palbociclib—302 patients from PALOMA-3, a trial which assessed the drug in combination with hormone therapy for advanced cancer, and the POP trial which looked at palbociclib used on its own before surgery in 61 patients with breast cancers that hadn’t yet spread.

In the PALOMA-3 trial, women with low levels of cyclin E1 responded to combination treatment for an average of 14.1 months before their tumor started growing again, compared with only 7.6 months in women with high levels, and 4 months among those who received a placebo plus hormone therapy.

Importance of biopsies to guide treatment

Strategies to overcome cancer’s lethal ability to survive and resist treatment are a major focus by researchers at the ICR, who are poised to outsmart cancer with the world’s first anti-evolution “Darwinian’ drug discovery program.

To facilitate this, the research institution is constructing a £75 million state of the art building—the Centre for Cancer Drug Discovery. It will house a series of pioneering projects to deliver long-term control and effective cures, just as comparable approaches have achieved with HIV.

Palbociclib targets two proteins called CDK4 and CDK6 that are involved in a series of checks that control when a cell can replicate its DNA. By blocking these two proteins from doing their jobs, cancer cells can’t multiply.

Cyclin E1 is also involved in the checkpoints that dictate when a cell can multiply, and the researchers hypothesize that high levels of cyclin E1 allow cells to bypass other checks and keep multiplying, uncontrolled.

Previous studies hadn’t been able to identify a marker which indicated how successful palbociclib would be, or to spot resistance arising, so the team widened the search and analyzed the activity of 2,534 different cancer-related genes.

Cyclin E1 appeared to be the most significant predictive indicator of how a patient will respond to palbociclib, and they identified possible others including associated protein CDK2.

Interestingly, the effect of cyclin E1 on treatment response was stronger in biopsies from metastatic tumors than primary tumor biopsies taken at diagnosis.

The difference highlights the importance of taking biopsies of recurrent breast cancer to guide treatment as tumors evolve to become drug resistant.

Although the researchers show cyclin E1 is an indicator of response to palbociclib in two different treatment settings, it will still need to be validated as a test to guide treatment in clinical trials designed specifically to assess its success.

“Delaying the need for chemotherapy’

“Palbociclib is a targeted drug that allows women to live a normal life for longer—but when their cancer evolves and develops resistance, they can stop responding to the treatment.

“We’ve developed a way of identifying which women with advanced breast cancer stand to benefit for more than a year from the targeted treatment palbociclib, and which are likely to stop responding much more quickly.

“Nearly all the women on the PALOMA-3 trial benefited from the drug for at least a few months, delaying the need for chemotherapy. But some women will progress more quickly, and may require additional monitoring so we can switch treatments as soon as the drug stops working.

“We validated our findings using data from a second trial, but we will need to assess our test further to see how effectively it can guide treatment before it could start to be used routinely in patients.”

“I take my pill and I get on with my life’

Christine O’Connell, 46, from southwest London, was diagnosed with secondary breast cancer in February 2018. She said:

“I have seen first-hand the difference a targeted treatment can make. I’m on the 19th cycle of palbociclib and my cancer is currently stable. I take my pill every morning, and I get on with my life. I still cycle 3-4 times a week, which I could never have done had I been on conventional therapy.

“Palbociclib allows me to live a good life with cancer—and I want all cancer patients to have this hope and optimism for the future.”

“Our researchers have developed a test which could ensure the exciting new drug palbociclib is used more effectively in the clinic, and that where necessary women can be moved promptly from it onto alternative treatments.