Why at-home coronavirus testing is a bad idea: Expert warns ‘environmental virus’ could contaminate samples and lead to high rates of false-positives seen in Chinese study

Some coronavirus tests could return false-positive results for 47 percent of samples, a study abstract from China suggests.

‘In the close contacts of COVID-19 patients, nearly half or even more of the ‘asymptomatic infected individuals’ reported in the active nucleic acid test screening might be false positives, wrote the authors from Jiaotong University in Xi’an, China.

The abstract offers little detail about how this testing was done, but Chinese health authorities were traveling to the homes of infected people and collecting samples to test from other members of their households at the height of the outbreak there.

A US expert says that the high false positive result could be due to contaminations from poor collection – and cautions that similar rates would be possible if Americans tried to test themselves at home.

It comes after the US Food and Drug Administration (FDA) warned that companies could not sell at-home test kits direct to consumers – although some start-ups across the US had already started shipping them. 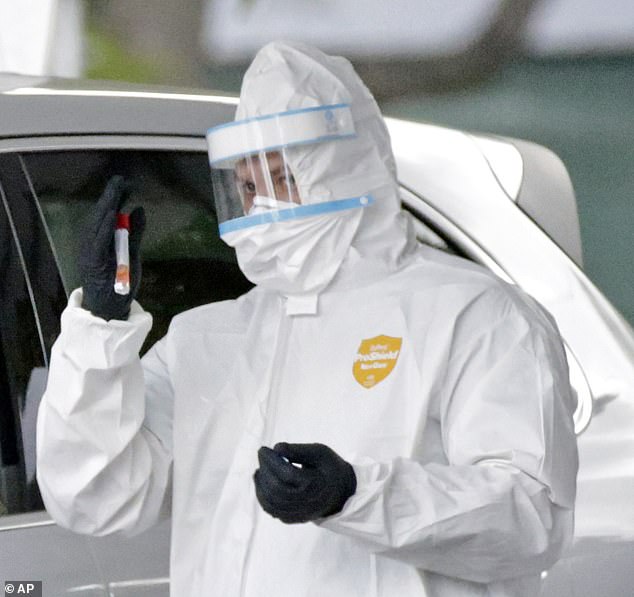 Even drive-thru testing may raise the risks that a sample for coronavirus testing gets contaminated, and at-home testing risks would be higher and could lead to false positives, a Columbia University scientist warned after Chinese research suggested that up to 47% of close contact tests there returned false positives

The Chinese research team predicted that about 20 percent of close contacts of people infected with coronavirus might develop the disease.

But they found that more than 47 percent of the tests returned false positive.

Only a study abstract was posted to that National Institutes of Health’s (NIH) PubMed repository, so it’s difficult to how many tests this translated to or how the study was conducted.

Still, Dr Susan Whittier, director of microbiology services at Columbia University and New York Presbyterian Hospital said it underlines just how sensitive and misleading tests for the COVID-19 can be if they’re not done in tightly controlled conditions.

‘When we think about false-positives, there are really only two steps where this happens,’ she told DailyMail.com: during collection or when the specimens are being analzyed in the lab.

In the case of the Chinese tests with alarmingly high false-positive rates: ‘Maybe they went to the homes of the infected people and tested the people around them.

‘That environment is contaminated and specimen collection has to be really carefully done.

‘As they’re collecting samples, they could be introducing environmental virus, and those samples would test positive, but it would be because of how they were collected.’

COVID-19 in particular sits at unusually high levels in the body, and thus likely in the environment, compared to other viruses. 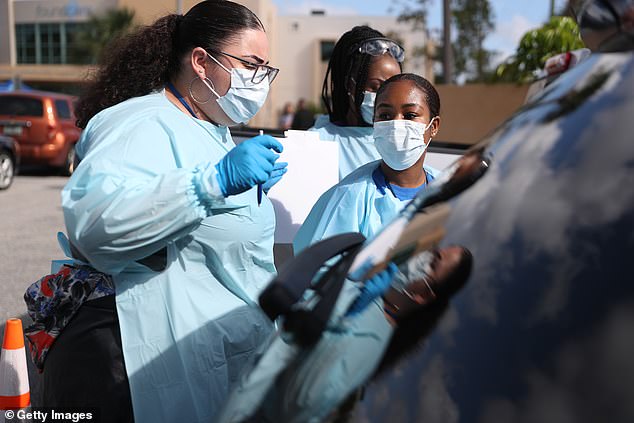 Dr Susan Whittier cautions that samples may test falsely positive for coronavirus ‘because of how they were collected.’ Pictured: health care workers collect samples at a drive-thru site 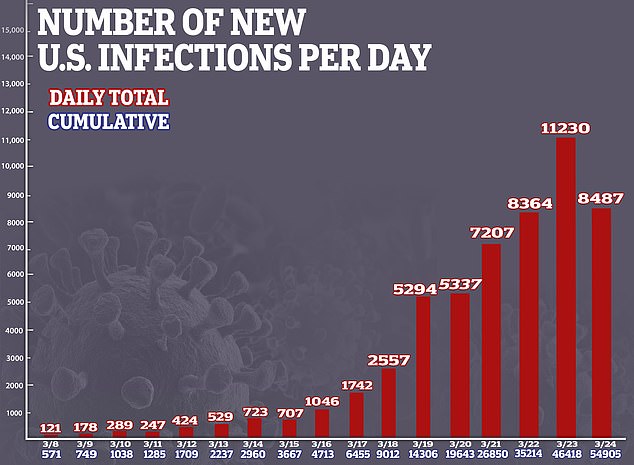 The Us has scrambled to ramp up testing, and its led to daily case increases as well as the hasty release of at-home tests before the FDA warned against them

Dr Whittier said that her lab, which is running between 450  has to amplify the levels of the virus by 20- or 30-fold to detect it.

With coronavirus, they only have to amplify it by 15-fold, ‘so there’s more virus there,’ she said.

It’s also possible that that samples get contaminated at labs where they’re analyzed.

Labs certified to the levels that Dr Whittier’s are run a relatively low risk of this happening because they have to have strict protocols in place.

Although states can now approve their own tests, including those for which samples are taken at drive-thru sites, the specimens still have to be analyzed at these rigorous CLIA labs.

‘Any time you’re using a kit from a non-certified lab or without FDA approval, I wouldn’t trust any of the results.’

Despite the need for better access to testing, this was among the concerns with at-home test kits like Nurx’s, Everlywell’s. 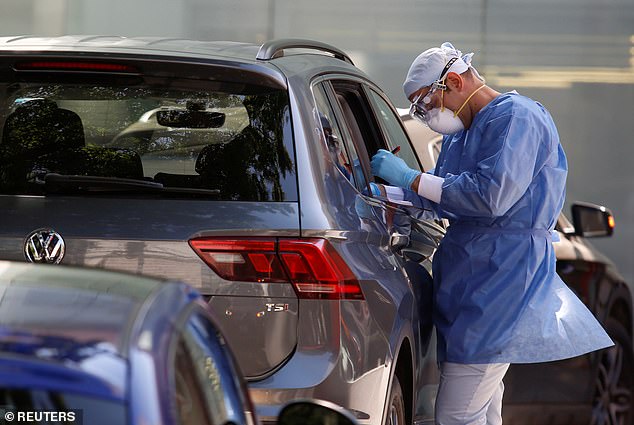 Dr Susan Whittier warned that ‘environmental virus’ in spaces occupied by infected people could lead to false-positives among their close contacts. This certainly applies to household members and could carry over to vehicles where drive-thru samples are collected

‘They come with good intentions in trying to make testing available to more people, but it’s 180 degrees away from what goes on in a CLIA lab,’ said Dr Whittier.

What’s more, even if the labs analyzing these results, it’s highly unlikely that lay people can take collect samples from themselves appropriately, despite the FDA’s announcement that such self-swabbing will be allowed if it takes place in health care settings.

Until that announcement, only nasopharyngeal swabs were acceptable, requiring a long Q-tip-like implement to be stuck far into the nostril.

‘If you do it properly, it’s so uncomfortable it feels like you’re going for a brain biopsy,’ Dr Whittier said.

Now, new research from the Bill and Melinda Gates Foundation, UnitedHealth, Quest Diagnostics and University of Washington has found that self-swabbing led to results equally accurate to those from tests on swabs taken by clinicians.

The study participants swabbed the lower, less difficult part of the nose to reach, a methodology Dr Whittier called ‘promising.’

But she still worries that swabs are taken outside of relatively sterile clinic environments, they could easily be contaminated.

‘If there are hundreds of cars in the line I’m afraid they’re not going to get a great specimen,’ Dr Whittier said. 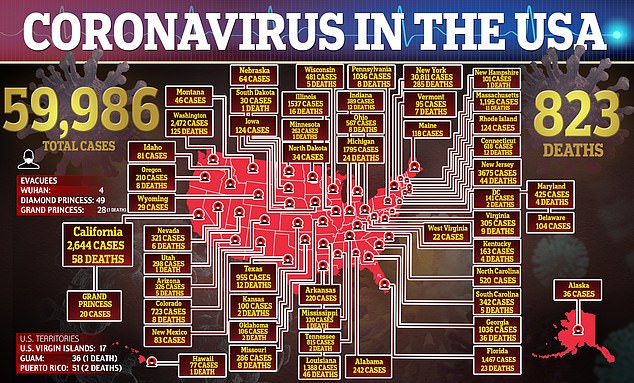 Nearly 60,000 Americans have coronavirus and more than 800 have died of the infection

‘Are they changing their gloves? I’ve seen videos where, after collecting [the sample, the workers] didn’t get it into the tube and it went down the side onto their hands.

‘There’s a lot of potential for contamination, but I haven’t been to one personally.’

Some labs found that even the CDC’s original test, which was supposed to be the ‘gold standard,’ returned false-positive results.

Drive-thru testing hasn’t been going on long enough for there to be solid data on false-positives from the kits, but Dr Deborah Birx Wednesday announced that Americans will now be permitted to swab themselves in their cars and hand their samples to health care workers in biosafe bags.

It’s meant to limit the use of PPE and exposure for health care workers but raises still more questions about how pure these samples will be and how accurate tests run on them will be.