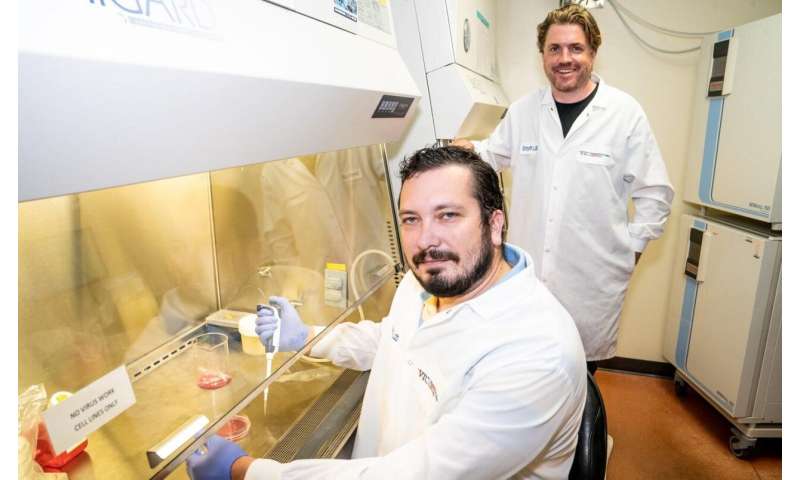 Patrick Calhoun, a postdoctoral associate, and his mentor, James Smyth, an associate professor at the Fralin Biomedical Research Institute at VTC, found that adenovirus not only uncouples electrical signaling pathways in the heart, but it also impairs the cells’ ability to make new communication channels.

Researchers made their findings via first-of-their-kind experiments to observe adenovirus effects on human heart cells in a culture dish.

“This is the first time we’re putting this human virus on human heart cells to see what it does in the context of infected heart muscle cells,” Smyth said. “That’s the real power of this.”

The study was published this month in The FASEB Journal, an international publication of the Federation of American Societies for Experimental Biology.

The discovery may increase understanding of arrythmias, which are problems of the heart’s electrical signaling that can lead to arrest of the heart’s coordinated beating and even sudden cardiac death.

The research in the Smyth laboratory focuses on ventricular arrhythmia that are potentially the most dangerous, but such electrical disturbances can affect all chambers of the heart.

Atrial fibrillation, the most common type of arrhythmia, affects more than 2 million people in the United States, according to the National Heart, Lung, and Blood Institute of the National Institutes of Health.

Adenovirus, which typically can cause a common cold, has a far more dangerous impact if it reaches the heart.

When the virus commandeers gap junctions, it can slow production of connexin43, disturbing the electrical system that keeps a heart beating properly, leading to arrythmias and sometimes sudden cardiac death.

Calhoun performed specific experiments that confirmed that the virus can effectively hijack the system that heart muscle cells use to communicate. Similar research is often performed using mouse models, but previously scientists lacked an effective model for adenovirus and the human heart.

He saw what he expected—the virus took over the gap junctions for its own replication purposes—but he saw something else he didn’t expect.

“I realized there were two distinct processes going on here, with the virus giving a double hit to the cell’s ability to communicate with its neighbors” Calhoun said. “Firstly, it was rapidly closing existing channels, and secondly it was shutting down the cells’ ability to make new ones.”

Smyth and Calhoun took particular interest in how the virus halted connexin43 creation and gap junction formation. The virus switched a protein pathway classically described as making new connexin to suppressing connexin instead. Smyth sees promise in learning more about how the virus made that change.

“The research has some limitations for extending the findings to the living heart because it’s done in vitro—in a dish outside of the human body—but still has tremendous value,” Smyth said. Fundamental studies provide the footing for the translational research that discovers therapeutics and diagnostic methods that improve people’s health.”

“They give us pointers and clues as to what to look for,” Smyth said.

“This research goes beyond viral infection with the hope that we can generate new therapeutic interventions for diseased hearts,” Calhoun said. “We’re essentially learning from adenovirus to find the most efficient ways to stop, rather than cause, arrhythmias.”

Calhoun’s research formed a significant part of his recently defended doctoral dissertation. It’s complemented by the work of Rachel Padget, another researcher in Smyth’s lab who was recently awarded a National Institutes of Health fellowship to develop a first-ever mouse model to investigate how adenovirus attacks the heart.

Calhoun, originally from Niceville, Fla., has been mentored by Smyth for more than five years. A U.S. Army veteran, Calhoun began his academic career at Virginia Western Community College in Roanoke, Va., before transferring to Virginia Tech.