Private companies have won £15BILLION of NHS contracts since 2015

Private companies have won £15BILLION of NHS contracts since 2015, research reveals amid political row over ‘health service for sale’

Analysis showed two thirds (61 per cent) of the £23.9bn spent on services since 2015 was handed to private companies.

Just a third (31 per cent) of the entire budget was awarded to NHS providers, according to GMB.

The trade union’s report published today also found private firms had been handed contracts worth £3.6bn last year alone – up 89 per cent from 2015.

It comes after the government was accused of trying to sell off the NHS in in a post-Brexit free trade agreement. 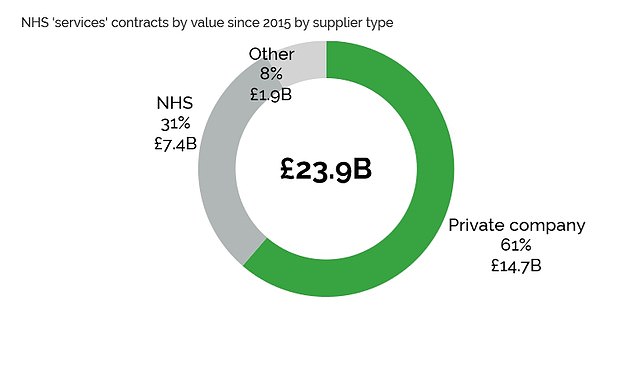 Analysis shows the NHS has splurged almost £15billion on private contractors in four years. It spent £7.4bn on NHS providers and almost £2bn on other organisations and local authorities 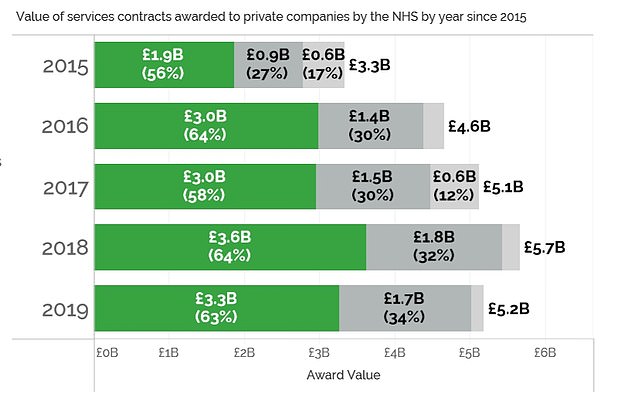 The GMB report published today also found private firms had been awarded contracts worth £3.6bn last year alone – up 89 per cent since 2015

Around £1.9bn (8 per cent) worth of contracts were dished out to other organisations, such as charities, universities or local authorities.

Of the top twenty private providers, Care UK Clinical Services and Virgin Care Services have won the most contracts since 2015.

Between them, they were handed 30 contracts in four years – at a time when the NHS is short of tens of thousands of nurses.

Virgin Care was widely criticised after it reportedly sued the NHS in 2016 when it failed to secure an £82m contract to provide children’s health services in Surrey.

The report showed the single most valuable contract was won by Sirona Health and Care. 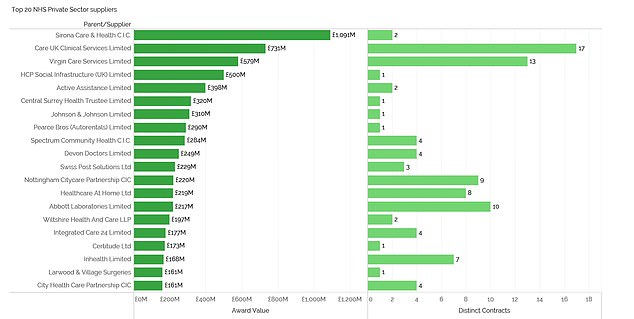 Of the top twenty private providers to the NHS, Care UK Clinical Services and Virgin Care Services have won the most contracts since 2015. The single most valuable contract was won by Sirona Health and Care

The firm, which is constituted as a Community Interest Company, was awarded a £1.09bn contract to provide adult community health services in areas of the South West for ten years.

The latest figures will fuel Labour’s claims the Tories are planning to sell the NHS to Donald Trump.

Jeremy Corbyn launched a scathing attack on the government last week, pointing to documents leaked from a series of meetings between UK and US government officials from July 2017 to July 2018.

He hailed International Trade department papers as ‘proof’ the Prime Minister had put the health service on the table in a post-Brexit free trade agreement.

Rehana Azam, GMB National Secretary, said: ‘These shocking figures expose the extent to which our NHS is increasingly falling into private hands.

‘Outsourcing is bad news for patients and NHS staff. Time and time again, we have seen private providers fail to deliver while our members’ terms and conditions and the NHS national agreement have been undermined.

‘We are clear that it is safer and in the long-run it is better value for services such as care, patient transfers and facilities management to be brought back in house.

‘NHS services should be provided in the public interest, not for private profit.

‘Urgent action is needed to end outsourcing in the NHS, and we urge NHS workers and everyone who relies on the service to make that case to their local candidates during the election.’

Health Secretary Matt Hancock has rubbished Jeremy Corbyn’s chief election attack line by insisting a Conservative government would ‘walk away’ from any post-Brexittrade deal that compromised the NHS.

The Tory minister used a flurry of broadcast interviews this morning to slap down the Labour leader’s claim that Boris Johnson is planning to ‘sell the NHS to Donald Trump’.

He made a cast-iron vow that the health service would never be on the table for bartering and accused Mr Corbyn of deflecting from his own troubles.

In a rigorous rebuff to the left-winger, Mr Hancock told Sky News: ‘The position is that the NHS is not on the table.

‘The changes to patent arrangements to do with pharmaceuticals will not be in that trade deal.

‘I’ll tell you this. If the Americans say that we’ll only do this trade deal if the NHS is part of it, then we will walk away.

‘We’ll protect the NHS and we love the NHS. We’ll nurture it and we’ll make it stronger.’

At a press conference in Westminster yesterday, Mr Corbyn brandished over 400 pages of ‘secret’ minutes from meetings between UK and US government trade envoys.

The Labour leader said they provided proof the Prime Minister is prepared to allow ‘total market access’ of the NHS to US companies.