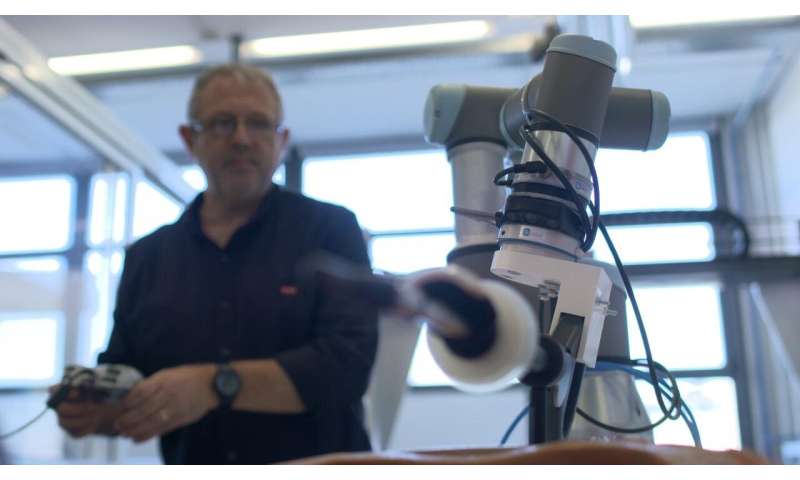 A team of researchers from the Polytechnic University of Valencia (UPV), belonging to the Institute of Automation and Industrial Informatics (AI2), has developed a gynecological surgical assistance robot for uterine operations.

The project has been conducted in collaboration with the Gynaecology and Obstetrics Department, General Surgery, Urology and Thoracic Surgery of Valencia’s General Hospital, through their Research Foundation and with the support of the Valencian Innovation Agency (AVI) of Valencia’s regional government, in the framework of a project to boost innovation in robotic surgery.

Currently, uterine operations that the robot would provide support for, are conducted with the Da Vinci robot, with which the operation is conducted remotely by a surgeon. Another doctor inserts a uterine handler through the vagina, thus providing a point of support from inside the womb of the patient, so that the Da Vinci robot can conduct the surgery in a more comfortable and safer way. This second doctor holds said handler for the almost four hours that the operation lasts. Now, the system developed by the ai2 and UPV specialists, will allow for a robotic arm to control the handler that the second doctor currently holds for hours to control the position of the uterus.

To do so, the pieces needed to attach the two types of handlers currently used in this surgery were designed in 3-D. Likewise, the UPV researchers developed an automated position control system for the robot, as well as another automated control system for the force applied on the wall of the patient’s uterus. “It was important for the control systems to be very precise, because if the robot exerts too much strength, it can entail an additional danger for the patient,” explains Ángel Valera, researcher from the ai2 Institute of the UPV.

To learn the range of movements with which to program the robot, the researchers worked with gynaecologists and surgeons, and even attended several uterus operations. “In the UPV laboratories we have worked with simulation material from the General Hospital such as the ProDelphus surgical simulator, which represents a women’s abdomen in a very realistic way, allowing us to manipulate tissues that are very similar to real ones,” adds Valera.

The project, which has lasted a year, will continue to develop a robot with a specific purpose. “The fact that the robot has a specific purpose will allow for the final design to be very simple and affordable, and for the technology to be entirely manufactured and implemented in the Valencian community,” says Valera.

Juan Gilabert, head of the Gynaecological and Obstetrics Department of the General Hospital, explains that “There currently is no articulated robotic arm to conduct uterine mobilisation. The development of this project will allow the head surgeon to have accurate control with three degrees of freedom of the uterine position during the operation, and will also increase the availability of the staff to conduct tasks linked to their training.”