A mother’s consumption of fats during pregnancy may affect their child's future health outlook, according to University of Sydney researchers. 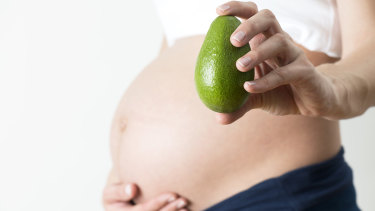 A small study by University of Sydney researchers has found a possible link between fats – including ‘good’ fats from avocado – consumed by mothers during pregnancy, and infants’ future health outlook.Credit:Getty

Researcher Michael Skilton, an associate professor of nutrition and cardiometabolic health at the University of Sydney with a focus on identifying early development risk factors for heart disease and cancer later in life, said more research was required but the study suggested maternal intake of fats, including some "good" fats considered "good" in later life, could affect development.

“We have focused increasingly on the role of maternal diet,” Associate Professor Skilton said. “We’ve got really good evidence that kids who haven’t grown as well as they should have while they were in the womb are at a much higher risk of heart disease and type 2 diabetes as adults, so there’s proof of principle that early life risk factors can affect our long-term risk of disease.”

Diet is an important factor in fetal development and also provides “potential information” about how we might lower the risk of heart disease, diabetes and cancer.

For the study, published in the American Journal of Nutrition last week, Skilton and his team analysed whether the diets of 169 new mothers affected their newborn’s epigenetic or biological age.

The mothers completed dietary questionnaires about what they ate while pregnant which were cross-checked with blood samples.

The researchers took saliva samples from the newborns and analysed changes to the structure around DNA, known as the epigenome.

“We know that changes in that structure can affect the way that a gene is turned on or turned off,” Skilton said.

Not all forms of fat resulted in epigenetic ageing. The most beneficial fat appeared to be in the form of Omega 3 fatty acids, in particular, the α-linolenic acid (ALA), which is abundant in nuts and seeds.

“We all have to eat fat, but from the perspective of which fat might be healthiest with regard to offspring biological/epigenetic ageing, that would appear to be plant-based Omega 3s,” Skilton said.

While the researchers expressed surprise about the monounsaturated fat association, particularly given this type of fat is considered beneficial for heart health later in life, Skilton stressed the study was observational and small and further research was required.

'Eating right during this first thousand days could be the key to eventually turning the tide of the "diabesity" epidemic.'

“But it raises the potential question: is pregnancy a specific time we need to be modifying the good fats that we’re eating?”

The research also found “some association” between higher carbohydrate intake and better epigenetic ageing in the offspring.

“That may suggest that a low-carbohydrate diet may not be beneficial for the offspring’s biological age and long-term risk of heart disease … We found no robust association with protein intake.”

“Understanding how a mother’s environment, including her diet, affects the epigenetics of a newborn is an important first step in understanding the risk of developing chronic diseases like cardiovascular disease in the future,” Professor Jennings said.

Melanie McGrice, an accredited practising dietitian who specialises in pregnancy and women’s health, said the research would increase understanding of healthy maternal eating.

“This exciting new research adds to what we’re learning about the importance of a nutritious diet in the lead up to conception, during pregnancy and breastfeeding,” McGrice said.

“It’s incredible to think that what a parent eats during this time can impact the future health of their baby. Eating right during this first thousand days could be the key to eventually turning the tide of the 'diabesity' epidemic.”