Econometrics researcher’s calculations illustrate why we should social distance 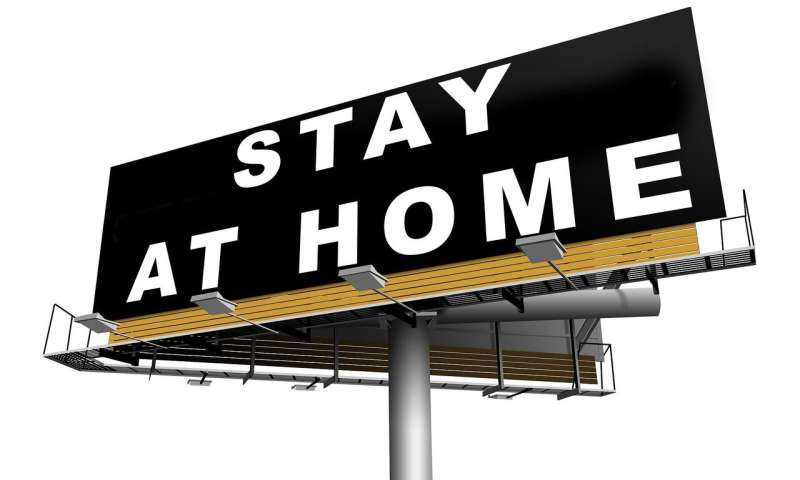 Not only does social distancing work to slow the spread of the virus, it’s an exercise in probability, according to Richard Sheehan, finance professor at the University of Notre Dame’s Mendoza College of Business.

Sheehan, who specializes in applied econometrics, has developed a model that shows viral transmission as a probability rather than a certainty and demonstrates how social distancing—or changing the probabilities—slows the spread.

Sheehan calculates higher numbers of infections and deaths under current plans for containment than other models currently being shared. His predictions so far have been accurate, but his emphasis on how our behavior can improve the odds is an encouraging sign as the coronavirus pandemic unfolds.

“I think people deserve the truth,” Sheehan said. “And I think that Dr. Anthony Fauci has, certainly, hinted at extreme possibilities, but he’s walking a tightrope between trying to inform and trying not to scare.”

A simple perspective on Sheehan’s deterministic model shows the connections all people have—family, friends, co-workers, acquaintances and strangers encountered during daily routines. Those connections all have connections, and so on. The left side represents an individual’s personal “supply chain.” The right shows the recipients of a person’s “services.”

The virus is introduced on the model’s left side by a contact of a contact of a contact. Eventually it reaches the middle where the individual then passes it along to three contacts who then share it with three, and so on. With three degrees of separation, a person eventually shares the virus with three plus nine plus 27, totaling 39 people. Using six degrees, the total is 1,092.

“The number three is important here,” Sheehan said, “because the best current estimate is that each infected person is transmitting the virus to three other people. There is nothing complicated or malicious about this transmission process. Those doing the infecting don’t realize they have the virus.”

Not everyone who encounters an infected individual will contract the virus. Sheehan’s probabilistic model offers a more realistic view of viral transmission. It also demonstrates how things change as more people are exposed to the virus.

“Let’s say one percent of the population unknowingly has the virus,” Sheehan offered. “And let’s assume people don’t abide by social distancing guidelines and will come into contact with an average of 100 others each day. And each of the contacts of their contacts will have 100 interactions with people who have a one percent chance of having the virus. “One percent times 100 equals one, and that’s how many people with the virus each of your contacts should expect to encounter each day, for a total of seven encounters per week,” he added. “In this example, you have 39 people in your personal supply chain with three degrees of separation, giving you seven times 39 or 273 opportunities for someone in your supply chain to become infected and potentially to pass the virus on to you.”

Another important variable is the virus’ efficiency in transmitting itself.

“It likely depends on the amount of contact and the behaviors of both parties,” Sheehan said. “Let’s be conservative and say that on average, the transmission rate is only one percent. Over the course of a week, those 273 opportunities for viral transmission in your supply chain will lead to one percent times 273, or 2.7 actual transmissions.”

“This still doesn’t mean you will get the illness,” he continued. “Transmission is probabilistic rather than deterministic. If you are infected and I’m standing next to you, that doesn’t mean I will get it too. But it does mean I’m at a higher risk with the risk likely increasing the longer we’re together and the closer we stand.

“Some folks in your supply chain are likely to pass you the virus, and you have the greatest chance of giving it to family, close friends and co-workers,” Sheehan added. “Simply because you have closer and more frequent contact with them, the probability of transmission is much higher. Factoring in that transmission is probabilistic, with a 30 percent chance of transmitting the virus to your closest associates, in this case with three degrees of separation, you’ve shared the virus not with 1,092 people but with only nine.”

With the virus still ramping up, the probability of someone in a bar or gym or at work being infected is very low. In a small, rural community, the probability likely will be low compared with New York or Detroit. Over time, all those probabilities will rise as more people contract the virus and continue to circulate.

“We started with each of a person’s supply chain contacts having 100 interactions per day,” Sheehan said. “Under those circumstances, the odds of getting the virus are nearly a certainty within a matter of a few weeks if all involved do not change behaviors. Every day is a roll of the dice on catching the virus without knowing until on average six days later—nearly a week during which the virus is being passed along.”

Enter social distancing. Consider how changing the probabilities changes the chances of catching and transmitting the virus.

“We began with three degrees of separation and 39 people in an individual’s supply chain,” Sheehan said. “Intentionally reducing close contacts from three to two with everyone else in that supply chain following suit drops that number to 14 people. Without changing any of the many other probabilities, the person’s contacts with those infected drop from nearly three to just below one. This reduces their probability of getting the virus by about two-thirds.

Catching the virus is fundamentally a matter of probability. And there are almost limitless probabilities to consider.

“If you go to the grocery, how close do you come to how many people and are they facing you or facing away?” Sheehan asked. “Has the cashier been infected? At home, if you have a delivery from Amazon, did the worker who pulled the product have the virus? How quickly did the package get to you and did the delivery person have the virus? Individually, most of those probabilities may be trivial. But when you total them and realize you will face them today, tomorrow and the next day, suddenly the risk is nontrivial. I thought the best illustration of this was to pick one component and show how just a small reduction in one probability makes a big difference.”

“Model estimates of the number of additional fatalities differ dramatically,” Sheehan said. “One of the primary reasons is the assumptions about probabilities inherent in those models. Those probabilities, however, aren’t etched in stone but in many dimensions are the result of our decisions.”