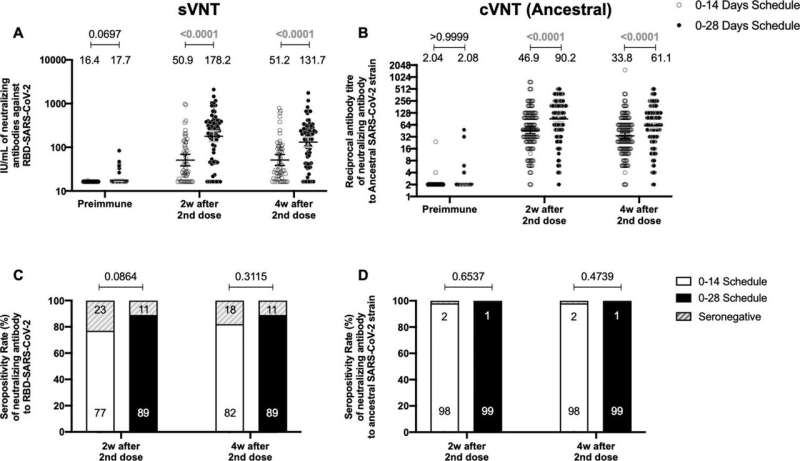 A clinical trial evaluating two different immunization schedules for a new COVID-19 vaccine shows that both regimens generate a similar immune response, according to results published today in eLife.

The finding is important for helping plan national vaccination strategies and ensuring people receive the vaccine when it is likely to be as effective as possible.

Worldwide vaccine development efforts led to 10 prototype vaccines that have been approved for emergency use by the World Health Organization (WHO), and more than 8 billion vaccines have been administered to people globally, to date, according to WHO data. Most approved SARS-CoV-2 vaccines rely on a single vaccine component, usually the viral Spike protein or its receptor binding domain (RBD).

However, this reliance on a single component could limit the ability of the resulting antibodies to fight new Variants of Concern (VOC) where the Spike or RBD has been mutated. The CoronaVac vaccine uses whole inactivated virus and contains a broader mix of antigens than just the Spike protein. It is hoped that this approach might better protect against emerging new variants of SARS-CoV-2.

“The vaccine has been shown to be immunogenic in large-scale clinical trials in several countries at preventing hospitalization in otherwise healthy adults with COVID-19,” explains author Susan Bueno, Professor at Pontificia Universidad Católica de Chile. “We wanted to compare the immune response elicited in healthy Chilean adults immunized with two doses of CoronaVac separated by either two or four weeks, to see which gave the best immune response.”

The team analyzed blood samples from subsets of patients from the Phase 3 trial conducted in Chile to see how strong their immune response was at different stages of immunization. To fight an infection, the immune system uses T cells that detect and destroy body cells infected with viruses, and B cells produce antibodies that neutralize the virus. T cells can also help other immune cells to mount an effective antiviral response. The team tested these components of the immune system.

They found that separating the two vaccine doses by four weeks produced antibodies with stronger neutralizing activity than when the doses were given two weeks apart.

However, both immunization schedules produced similar amounts of antibodies. Furthermore, both vaccination schedules switched on significant activation of T cells and triggered production of an immune-modulatory substance called interferon gamma when the cells were stimulated with “megapools” of protein fragments from SARS-CoV-2, provided by La Jolla Institute for Immunology in San Diego, California. This activation and increase in interferon were not seen with other non-SARS-CoV-2 protein fragments.

There was also a similar profile of antibodies produced against different VOCs tested, including Alpha, Beta, Gamma, Delta and Omicron, regardless of the immunization schedule used.

Finally, the team looked at whether there was a relationship between the antibody response and the immune cell response against all VOCs tested and whether this was the same for both immunization schedules.

They found that the immune responses elicited by CoronaVac go hand in hand for either immunization schedule, as increased values of neutralizing antibodies were associated with increased numbers of activated T immune cells. Importantly, a recent study published by the same Chilean team that evaluated efficacy confirmed that both immunization schedules provided in adults led to equal protection against COVID-19.

“Given our data, we can conclude that immunization with CoronaVac with either two weeks or four weeks between each dose induced significant antibody and T cell immune responses in healthy adults from Chile,” says senior author Alexis Kalergis, Professor at Pontificia Universidad Católica de Chile.