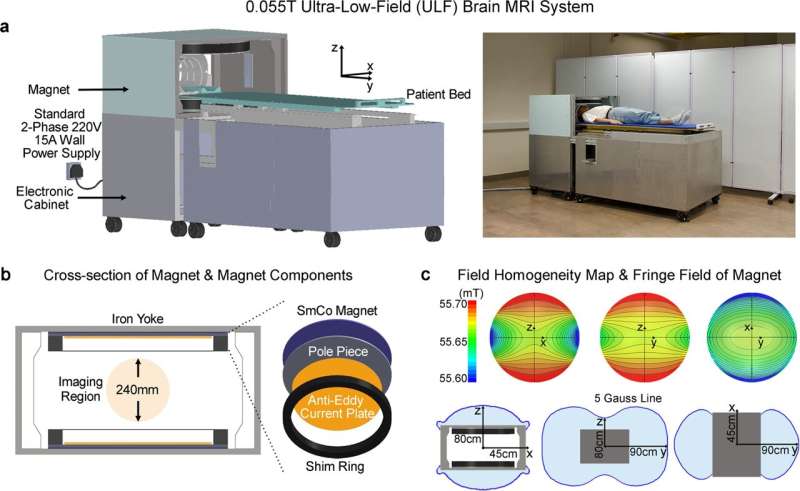 A team of researchers at the University of Hong Kong has developed a low cost, portable MRI machine that does not require heavy and expensive shielding and is still able to diagnose brain disorders. In their paper published in the journal Nature Communications, the group describes how they downsized the MRI machine and the possible uses for it.

The development of MRI machines was a major medical breakthrough—they allow for imaging soft tissue inside the body giving doctors a view without cutting. They have come to be the primary tool for diagnosing brain injuries and disorders. But the machines are also expensive, ranging from 1 to 3 million dollars. They are also expensive to operate, with most machines running close to $15,000 a month in operations and maintenance costs. Additionally, they are loud and cumbersome, and a nightmare for people with claustrophobia. In this new effort, the researchers have developed an MRI machine that they claim can be made and sold for as little as $20,000. They note it can also be plugged into a standard wall outlet and does not require shielding, and it is also light enough to push from room to room on wheels.

The researchers were able to reduce the cost of the machine by reducing its magnetic field requirements—from 3 Tesla down to 0.055 Tesla. This was accomplished by implementing a deep learning algorithm that cancels out interference between external electromagnetic signals and the magnets needed by the systems. And that means that the resulting machine does not require shielding, which makes up a lot of the bulk of conventional MRI machines. The slimmed-down version weighs just 750 kg.