What Role does Endothelial Infection Play in SARS-CoV-2 Infection?

The severe acute respiratory syndrome coronavirus 2 (SARS-CoV-2) can cause inflammatory lung disease, including clot formation and hyper-permeability of the lung vessels, resulting in edema and bleeding into the lung. Inflammation also affects other organs, mediated by the cytokine storm.

This inflammation is characterized by endothelial cell dysfunction in multiple organs. The cause of this endothelialopathy is unknown. It could be due to the direct infection of endothelial cells or an indirect effect of the cytokines. 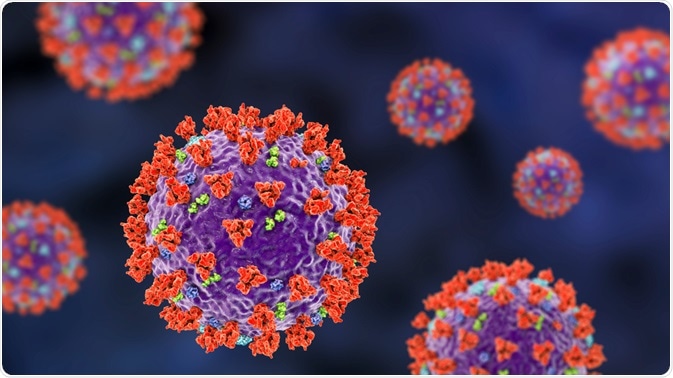 Unlike earlier coronaviruses pathogenic to humans, SARS-CoV-2 has a spike protein that is linked to host recognition and viral attachment via the angiotensin-converting enzyme 2 (ACE2) receptor. A unique three-residue RGD motif outside the ACE2 recognition site may allow the spike protein to bind to endothelial proteins called integrins, that bind the RGD group.

In fact, the major integrin on endothelial cells, called αVβ3, is able to bind to multiple RGD-binding ligands. It also engages multiple extracellular matrix proteins, such as fibrinogen, fibronectin, and vitronectin, via its binding pocket. These matrix proteins regulate cell adhesion, migration, and proliferation, as well as angiogenesis.

This mutation could thus enhance SARS-CoV-2 binding to the host cell and may be responsible for the high transmissibility of this virus compared to the earlier ones, while also allowing for multiple routes of entry for the virus and promoting its dissemination within the host by two receptors.

SARS-CoV-2 thus produces marked dysregulation of the endothelial barrier, causing it to lose its integrity and producing a hyper-permeable state. This leads to shock and the rapid spread of the virus to major organs.

Endothelial cells are key to several physiological processes including activation of immune cells, platelet aggregation and adhesion, leukocyte adhesion, and transmigration. They are also the target of many viruses, leading to multi-organ dysfunction.

Some studies have failed to show the growth of the virus within endothelial cells, which has been attributed to the lack of expression of the angiotensin-converting enzyme 2 (ACE2) receptor on these cells.

However, it may be argued that this is due to the intrinsic differences between the endothelial monolayer grown in vitro, vs the endothelial lining of the blood vessels that handle blood flowing under shear stress; the activation of the endothelial cells by the high volume of cytokines; and the tight contact with the epithelial cells of the lung capillaries.

What is a Cytokine Storm?

Other researchers have reported that SARS-CoV-2 is found in association with the endothelial cell marker CD31 within the lungs, in infected mice and non-human primates (NHPs). Even more significantly, this finding has been identified in the lung tissue of people who died of severe COVID-19.

Though all endothelial cells express ACE2, all are not the targets of the virus. Instead, it requires the co-expression of other host proteases such as the transmembrane serine protease TMPRSS2, or cathepsins, that cleave the spike protein to its fusion conformation, allowing viral entry into the host cell via endocytosis.

In so doing, endothelial cells may promote the destruction of infected cells by presenting viral proteins to CD8 T cells. Moreover, endothelial cells in the microvasculature may cause memory or effector CD4 T cells to migrate through the endothelium. Antiviral cytokines including gamma-interferon (IFN-γ) may induce class I or II major histocompatibility complex (MHC) molecules, costimulatory molecules that are typically required for T cell activation to occur.

This means that the endothelial dysfunction caused by COVID-19 blocks lymphocyte activation via endothelial cells, causing an imbalance in the adaptive immune response.

Lymphocyte depletion often seen in COVID-19 could also be the result of the excessive inflammation induced by the endothelial cell injury. The reduced number of CD4 lymphocytes may cause an impaired response to the infection while also stimulating further inflammation. Thus, the hyper-inflammatory response in severe and critical COVID-19 could be due to endothelial cell infection and dysfunction.

This hyper-permeability is associated with the leakage of both cellular and non-cellular components of the blood in the small blood vessels of the lung, causing the alveoli to become congested with liquid. The patient drowns in the fluid from the leaky blood vessels, which can endanger life by causing asphyxiation.

Simultaneously, the clotting cascades are dysregulated, causing microthrombi to form throughout the circulation, along with leukocyte infiltration. The endothelial cell dysfunction may cause further inflammation and leukocyte recruitment and adhesion.

Since endothelial cells express glycosaminoglycans and thrombomodulin on their cell surface, they inhibit the clotting cascade component, thrombin, as well as a protein inhibitor of tissue factor. Many relaxing factors such as nitric oxide (NO) and prostacyclin (PGI2) are also produced by these cells, thus blocking leukocyte and platelet adhesion and migration, smooth muscle proliferation, and exerting an anti-inflammatory, anti-apoptotic effect.

When the endothelial cells are injured by the viral invasion, they cease to exert their anticoagulant effect, leading to a thrombotic tendency that manifests as extensive microthrombi, hyaline membrane formation in the small arterioles of the lung, and diffuse alveolar injury.

Elevated D-dimer levels occur with this hypercoagulable state, causing poor outcomes and higher mortality with COVID-19. Multiple procoagulant mechanisms are at work, from the exposure of the tissue factor to clotting factors in the blood to the loss of endothelial integrity and thus activation of the intrinsic clotting pathway by the exposed matrix under the endothelial cell layer, to the devastating release of van Willebrand factor (vWF), due to endothelial dysfunction. This molecule acts to bridge platelets for aggregation and clot formation.

Infection of the endothelial cells could be associated with viral invasion of the adjacent tissues, that is, of the smooth muscle cells of the arteries and the cardiac myocytes.

The binding of the spike protein to αVβ3 can be inhibited by the specific αVβ3-antagonist Cilengitide, an RGD tripeptide, that has a high affinity to this integrin and suppresses virus-endothelium binding at very low doses.

Other therapeutic strategies include serine protease inhibitors, renin-angiotensin-aldosterone system inhibitors, statins, heparin, corticosteroids, and IL-6 inhibitors, all of which act at least in part via stabilization and protection of endothelial integrity.