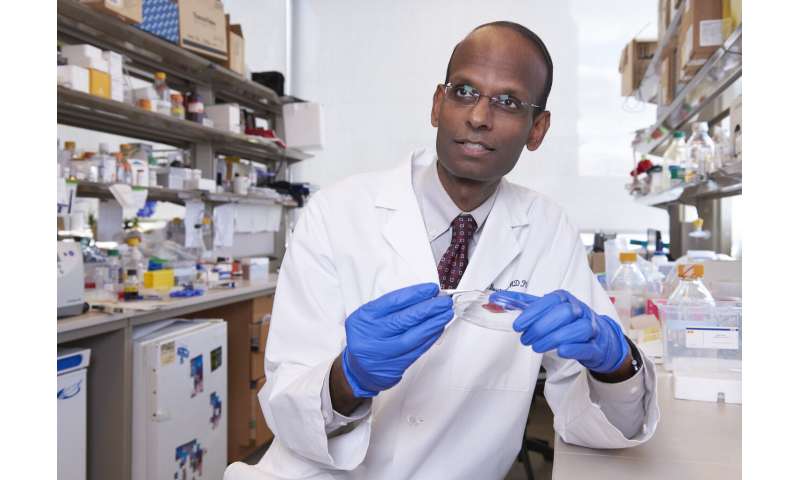 Before the news broke internationally that Chinese scientist He Jiankui had allegedly genetically engineered twin girls, only a few people around the world had known about it. One of those was Penn cardiologist Kiran Musunuru.

Musunuru had previously advised Associated Press journalist Marilynn Marchione on stories related to gene editing. So, when Marchione needed a trusted scientist to help her parse whether rumors she’d heard about the work in China were true, she called him.

“She wanted to figure out whether his claims of having made the first gene-edited babies were real or a hoax. That’s the point at which she brought me in. She had an unpublished manuscript” from Jiankui, says Musunuru, an associate professor of cardiovascular medicine and genetics at the Perelman School of Medicine. “I was horrified. I saw the data, and I screamed. I just couldn’t believe what I was seeing.”

He immediately knew the Chinese researcher had succeeded—faked data would’ve looked perfect, not terribly flawed, like these did—and he told Marchione as much. That was Thanksgiving 2018.

Around the same time, MIT Technology Review journalist Antonio Regalado also got a tip about the gene editing and prepared a story that ran the Sunday after Thanksgiving. The Associated Press published its piece a few hours later, and from there the news made headlines worldwide, with Musunuru in the thick of it, condemning the work as unethical and just plain wrong.

In the year since, Jiankui has made just one public appearance and no one has been able to confirm what happened to the girls, who are called by the pseudonyms Lulu and Nana. In a new book, “The CRISPR Generation,” Musunuru writes about Jiankui, the scientific breakthroughs that allowed for the gene editing of embryos, and how this particular use of the technology became a medical scandal. Just last week, MIT Technology Review published parts of Jiankui’s actual unpublished manuscript for the first time.

Penn Today spoke with Musunuru about the experience.

To start, can you provide a little background on what you do as a physician?

I’m focused on cardiovascular genetics. I’m trying to find ways to prevent heart attack using genetics as a tool, to find unusual people in the population who are protected against heart attack. We tend to think of mutations as bad, but most have no effect at all, and there are mutations that are actually good. Some people are fortunate enough to have won the genetic lottery—we call them ‘genetic superheroes’—and they have these good mutations that protect them from various diseases.

A decade ago, when I was a postdoctoral fellow at the Broad Institute in Boston, I was involved in identifying a family of individuals, four siblings, who turned out to have a gene called ANGPTL3 entirely turned off. They’re totally healthy, have children of their own, no hint of heart disease, and they’re alive and well. This gene is very exciting because people with ANGPTL3 turned off have lower cholesterol and lower triglycerides, too.

So, you have these people—they’re unusual—but how does that help the rest of us? These people were born with these naturally occurring mutations. What if we could use gene editing to put those same mutations into people who have heart disease or who are at high risk? That’s what I’ve been working on for the past six years, and here at Penn for the past four.

He Jiankui claimed to have altered the genome to protect the babies born from those embryos, Lulu and Nana, from HIV. How did you get involved in this, and did he actually succeed?

I met Marchione at an American Heart Association Meeting a couple years ago. That’s how I got to know her, and she learned about my background in gene editing. When she sent me the manuscript, I knew right away that Jiankui’s gene editing had not worked in the way it was intended. If it was a hoax, made up, the data would have looked squeaky clean; you wouldn’t be able to fake data this bad. It was clear he did the editing, and it was totally screwed up. And he went ahead, maybe not even realizing what his own data told him.

I have no doubt the children have unwanted genetic changes in their body. We don’t know the consequences. In some sense, they’re unknowable; we’ve never been in this situation before. Those edits are all over the body, and we don’t know what it means for them, whether they are truly HIV-resistant. Some cells got the edits; other cells may not have, and the potentially harmful edits … could get passed on to the next generation if they have children. These are questions Jiankui didn’t think about when he was doing the editing.

Given the type of work that you do, had you heard about or interacted with Jiankui before Marchione reached out?

About a week after the news broke last year, a reporter asked me if I’d had any contact with Jiankui before. I hadn’t known who he was, but I did a search in my email, and I got a hit with his name. To make a long story short, about two years ago, his grad student had emailed me asking for help, advice, supplies, and tools made in my lab that would allow them to turn off PCSK9 in human embryos. I did not engage because I thought this type of gene editing was a bad idea. But he had seen my published work, which is in the public domain. When I realized this, I felt as bad as I had when I first read the manuscript in my office.

But his original plan was not HIV. It was a gene called PCSK9, which can reduce the risk of heart attack when turned off. It’s also a gene I’d been working on in my lab, trying to turn off the gene in an adult liver to protect against cardiovascular disease. His original intent was to turn off PSCK9 in the embryo stage and protect the kids who were born from heart disease.

Why is what Jiankui did so bad?

He was running a clinical trial using experimental technology on unborn kids. There are a whole host of ethics violations. And now that this has been done, it’s going to be really hard to put the genie back in the bottle. A scientist in Russia has already publicly declared, very openly, wanting to do the same thing. He has said he’s already recruiting patients.

Where does your new book come into all of this?

The genesis of the book was partly therapy. I found myself caught up in this story in many ways. I’m probably more tied to this guy than almost anyone else in this field through no volition of my own. In explaining the whole backstory, I found myself telling the same story over and over. I started writing it down. I’d been taking notes all along because it felt so intensely personal.

In the book, I write about the events as they unfolded, my finding out that Jiankui was working on embryo editing, why any of this was possible. I also talk about my own experiences and research in the gene-editing field. It’s a first-person point of view. The second half of the book focuses on the gene-edited babies and if you’re going to do gene editing of embryos, what the potential uses might be. What would be legitimate medical uses and what would be more for enhancement?

It’s been a year since this played out. Has anything changed?

As far as we know, Jiankui is still under house arrest. Publicly, the last anyone heard from him was in January. Because of the backlash from this case, China has swung further than the U.S. toward stringently regulating gene editing. If you do any sort of genetic manipulation, and the person ends up with any kind of health problem, then you, the scientist or physician, are liable.