Natural preferences behind early social interactions in newborns are timed 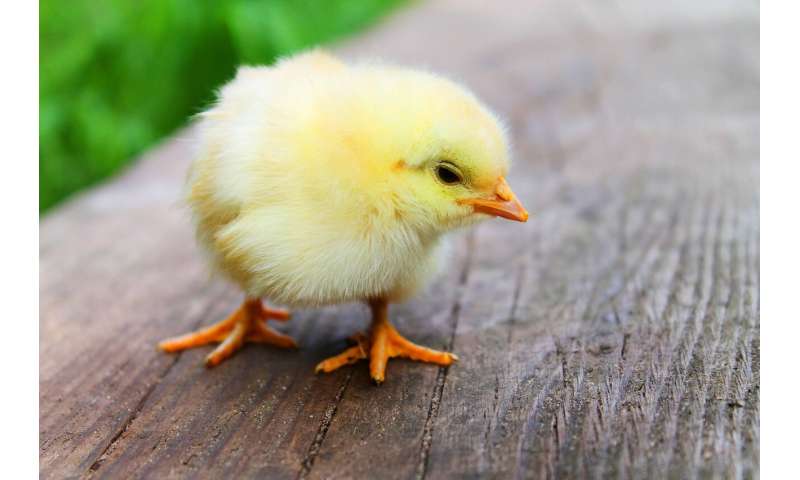 Scientists from Queen Mary University of London and the University of Trento, measured the length of time new-born chicks were sensitive to living or animate objects that visibly change speed when they move.

The study, published in Scientific reports, found that this attraction to other living things was short-lived, with chicks losing the behavior two days after birth.

Dr. Elisabetta Versace, first author of the study from Queen Mary University of London, said: “Our results show that a preference for animate objects that change speed decreases two days after birth. These early predispositions are fundamental for directing responses to living objects and, in turn, enhance learning and social interactions.

“The observations match previous findings that suggest early responses to other cues, such as face-like configurations change over time in human babies. Other notable cases of short-term sensitivity to particular stimuli are seen with language and in the development of the visual system.”

The team measured the distance run by new-born chicks towards video animations of an animate object, moving at a changing speed, and a non-animate object moving at a constant speed. They found that newly hatched chicks were more likely to approach objects that changed speed, but after two days this preference had disappeared.

Similar results were observed for all three breeds of chicks used in the study showing the widespread nature of this behavior in young animals.

Dr. Versace, said: “Older chicks were still moving towards the stimuli so we know this response wasn’t just due to the fact they were no longer interested. Like humans, chicks continue to develop in the first stages of life and we think this change in preference is due to the ongoing development of their nervous systems. We seem to be tuned to attend to particular stimuli in different stages of development.”

Attraction to other living beings is important for early social development, and delays or absence of this response have been linked to developmental disorders like autism.