Half the amount of chemo prevents testicular cancer from coming back, new trial shows 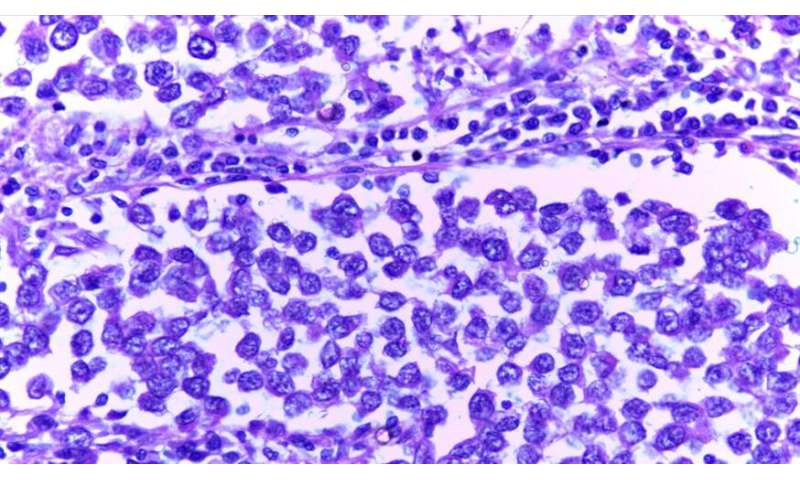 Testicular cancer can be prevented from coming back using half the amount of chemotherapy that is currently used, a new clinical trial has shown.

In many men who have had surgery for an aggressive form of testicular cancer, the disease can come back elsewhere in their bodies and need intensive treatment, often within two years after initial diagnosis.

The new trial showed that giving men one cycle of chemotherapy was as effective at preventing men’s testicular cancer from coming back as the two cycles used as standard.

Crucially, lowering the overall exposure to chemotherapy reduced the debilitating side effects which can have a lifelong impact on patients’ health.

The 111 trial has already begun to change clinical practice, reducing the number of hospital admissions, and lowering the costs of treatment.

The trial, led by The Institute of Cancer Research, London, and University Hospitals Birmingham NHS Foundation Trust, involved nearly 250 men with early-stage testicular cancer at high risk of their cancer returning after surgery.

The research was published in the journal European Urology today (Thursday), and was funded by Cancer Research UK and the Queen Elizabeth Hospital Birmingham Charity.

Testicular cancer is the most common cancer affecting young men, with many patients being diagnosed in their twenties or thirties.

After surgery, patients are currently offered two cycles of chemotherapy to destroy any cancer cells that may have already spread, or a watch-and-wait approach—where they receive no treatment unless their cancer comes back, at which point they are given three cycles of chemo.

Survival rates are very high, but as men are diagnosed young, if they choose to have chemotherapy they may have to live with long-term side effects for many decades.

In the new study, patients were given one three-week cycle of a chemotherapy known as BEP—a combination of the drugs bleomycin, etoposide and the platinum agent cisplatin.

The researchers looked at the percentage of men whose testicular cancer returned within two years of being treated with one cycle of chemotherapy, and compared these relapse rates with established data from previous studies in patients who were given two cycles.

In the new study, 41 per cent of men receiving one cycle of chemotherapy experienced one or more serious side effects while receiving treatment, such as an increased risk of infection, sepsis or vomiting. But only a small number—six patients, or 2.6 per cent—experienced long-term side effects such as damage to their hearing.

It is well established that lower chemotherapy doses are related to reduced rates of side effects, and the researchers are confident that the rates found in this study are substantially lower than those currently seen in the clinic.

“Men with testicular cancer who are at high risk of recurrence have generally been treated with two cycles of chemotherapy—but our new study found that one cycle was enough to stop their tumour from coming back.

“Reducing the overall dose of chemotherapy could spare young men who have their whole lives ahead of them from long-term side effects, and also means they will need fewer hospital visits for their treatment.

“This new trial is already changing clinical practice on a global scale, and is set to improve patients’ quality of life as well as reducing the cost of testicular cancer treatment.

“Reducing the number of cycles and the dosage of chemotherapy for testicular cancer could save the NHS money, and free up valuable hospital time and resources.”

Kris Taylor, 35, from the West-Midlands, was treated as part of the 111 trial at the Queen Elizabeth Hospital Birmingham after having surgery for his testicular cancer. He said:

“I was playing football semi-professionally at the time I was diagnosed. Even though my prognosis was good, knowing that you have cancer is really scary, and the key thing for me was to get back to normality as soon as possible. I’d already had to have time off for surgery, so, when I was offered the chance to have less chemo but with no greater risk the cancer would return, I jumped at it.

“The side effects of the treatment were really difficult, but I was straight back on the pitch as soon as it finished—five years on, and I’m still fighting fit. It’s great to know that others may now be able to benefit from the trial’s findings. Being able to reduce the amount of chemotherapy a person receives can make such a big difference to their quality of life in both the short-term and the long-term.”

Professor Emma Hall, Deputy Director of the Clinical Trials and Statistics Unit at The Institute of Cancer Research, London, said:

“We tend to be focused on whether we can cure a cancer or not, but for a disease like testicular cancer which affects young people, it is also crucial to ensure treatment does not leave patients with a lifetime of adverse effects.

“There is an important balance to be struck in giving men enough chemotherapy to stop their testicular cancer from coming back, without giving them so much that they suffer unnecessary side effects.

“Our study has found strong evidence to suggest that testicular cancer chemotherapy can be safely reduced from two cycles to just one—making their treatment shorter, kinder and cheaper.”

“Thanks to advances in treatments, survival for testicular cancer is very high, but the chemotherapy can cause unpleasant, sometimes lasting side effects. That’s why it’s such good news to see that we can cut down the amount of treatment we give.