When will your medical care collapse? 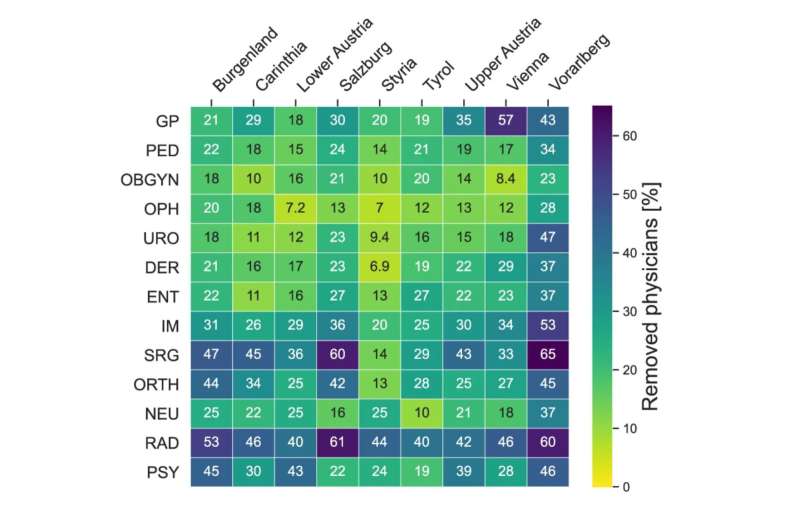 A retirement wave, mass quarantine, or lack of interest to work in the countryside: There are numerous reasons why a more-than-average number of medical practices could be closing at the same time. The system usually can compensate for some of these shortfalls. But there is a point where the situation can become critical. Until now, it was not possible to accurately predict where that point is. A research team from the Complexity Science Hub Vienna (CSH) now proposes a method to identify (tipping) points at which an adequate medical treatment of the population can no longer be guaranteed: the first stress test for a healthcare system.

In their newest publication in Nature Communications, the scientists use data from Austria to show how many resident physicians and medical specialists can drop out before patients don’t find a new doctor within reasonable distance. Yet, the authors emphasize that their method can be used in any country that has the relevant data available.

How the stress test works

For their simulations, the scientists had access to anonymized Austrian patient data from 2018. They combined them with publicly available data on the office hours of doctors. To make their multi-dimensional dataset more accessible, the visualization team at CSH also developed an interactive visualization.

“Our data show that patients do not choose physicians at random but rather via naturally emerging networks,” explains CSH researcher Michaela Kaleta, one of the first authors of the paper. For example, if a gynecologist goes on vacation, her patients usually will go to a particular other doctor as a substitute, and vice versa. If the same gynecologist retires, her patients are very likely to switch permanently to that colleague.

“We see that such patient-doctor-networks and patient flows are surprisingly constant, especially in rural areas,” says Jana Lasser (Graz University of Technology); the complexity scientist, shared first author, has been involved in this work since her time at CSH.

The researchers now feed the real-world networks into a computer model and “shock” the system by removing physicians—just like in a disease wave, for instance. “We can take one network node, i.e., doctor avatar, out of the system at a time and observe where the patients are moving on to within the network—and at what point a sufficient healthcare can no longer be provided,” says Lasser. 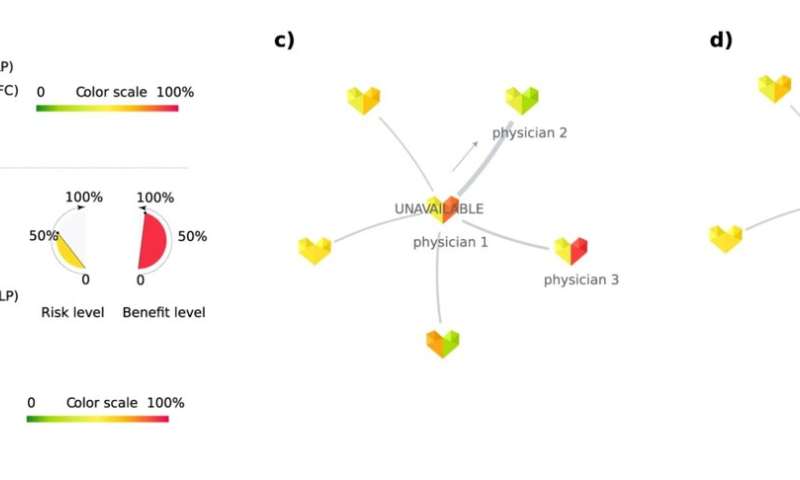 Eye doctors in Styria and Vorarlberg

The scientists found that the resilience of local healthcare depends on more than just the number of physicians in that region, known as “physician density.”

“Take ophthalmology in Styria and Vorarlberg as an example,” explains Lasser. “According to our dataset from 2018, both Austrian provinces had about the same number of contracted eye doctors per person, in other words, about the same physician density. However, we see that a shock in Vorarlberg can be four times larger than in Styria before patients don’t find proper eye treatment anymore.” According to this model, in Styria 7% of eye doctors can be removed before healthcare becomes critical, compared to 28% in Vorarlberg.

“Our stress test shows very precisely in which regions in Austria the healthcare system is resilient, and where health authorities would have to take urgent steps to improve the situation,” says Lasser. “The regional differences in Austria can be quite significant.”

“In many areas, such as the banking sector, stress tests have long been conducted to better prepare for crises,” emphasizes project leader Peter Klimek (CSH & Medical University of Vienna). “For healthcare, a stress test has long been missing.” Yet, the pandemic has shown that medical care can quickly reach critical limits when a large number of personnel is not available at a time.