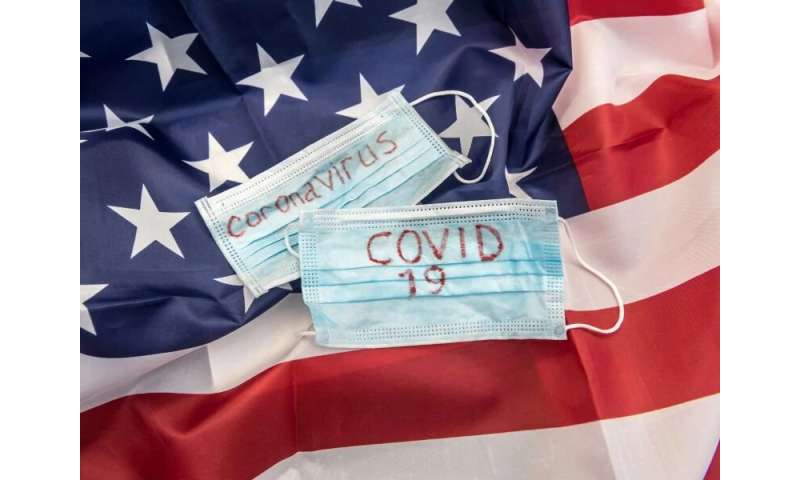 Social distancing guidelines crafted by the federal government to stem the spread of coronavirus expire on Thursday, but President Donald Trump said Wednesday he has no intention of extending the measures.

“They’ll be fading out, because now the governors are doing it,” Trump explained during a media briefing. More than half of the United States, at least 28 states, will be partially reopened by the end of the week when their stay-at-home orders end, CNN reported.

That is likely welcome news to the millions of businesses that have had to shut down or curtail operations during six weeks of stay-at-home orders, with 3.8 million Americans added to the nation’s jobless rolls on Thursday. That brings the six-week total to more than 30 million newly unemployed, The New York Times reported.

The order used the Defense Production Act to classify meat processing as critical infrastructure, to try to keep chicken, pork and other meat flowing to supermarket coolers, the Associated Press reported.

More than 20 meatpacking plants have been shuttered under pressure from local authorities and their own workers because of the virus. Others have slowed production as workers have fallen ill or stayed home to avoid getting sick, the wire service said.

But unions representing workers in those plants quickly fired back at the order, saying the White House was prioritizing cold cuts over workers’ health, the AP reported.

Meanwhile, a troubling study out of China found evidence that the novel coronavirus can spread through air.

That had been demonstrated in lab experiments, but now Chinese scientists say they captured tiny droplets containing genetic markers for the virus in real-world conditions, the Times reported.

“Those [droplets] are going to stay in the air floating around for at least two hours,” said Linsey Marr, a professor of civil and environmental engineering at Virginia Tech who was not involved with the Chinese study. “It strongly suggests that there is potential for airborne transmission.”

Still, the researchers stressed that because the droplets only contain tiny genetic traces of coronavirus, it’s not certain they are capable of infection.

The national guidance says states must develop their own testing plans and rapid-response programs while the White House provides “strategic direction and technical assistance,” and helps “align laboratory testing supplies and capacity with existing and anticipated laboratory needs,” the Washington Post reported.

Admiral Brett Giroir, the assistant secretary for health, told CBS News that the Trump administration is prepared to send all 50 states enough tests to screen 2% of their population per month for the virus, roughly 6.6 million people.

By Sunday, the United States had conducted about 5.5 million tests, according to the COVID Tracking Project, which compiles those figures from individual states. But that number is only equivalent to about 1.7 % of the U.S. population, the Post reported.

In contrast, Germany increased testing earlier than the United States did and had tested 2.5% of its population by April 21, the newspaper reported.

Social distancing orders remain a patchwork across the United States. Governors in hard-hit New York and Michigan are keeping stay-at-home orders in place until at least mid-May, while their counterparts in Georgia, Oklahoma and Alaska have already allowed certain businesses to reopen, the AP reported.

Still, even as states start to reopen for business, a new study suggests that many of the tests needed to prove that workers might be immune to the new coronavirus are faulty.

Researchers at the University of California, Berkeley, and UC San Francisco tested 14 of the leading blood antibody tests. These tests look for antibodies proving that a person has already encountered the novel coronavirus and might have some immunity to COVID-19, the Times reported. Such immunity would be crucial in allowing a person to safely return to the workplace.

But the research team found that only three of the 14 tests delivered consistently reliable results, and even those three were not perfect. Just one test was accurate enough that it never delivered a false-positive result (in which a person is identified as having antibodies for the new coronavirus when in fact he or she did not).

Outcomes were worse when it came to false-negative test results, the Times reported. False-negative findings mean that a person is falsely found to have not been exposed to the coronavirus, when in fact he or she has been exposed. Among the best three tests out of the 14 reviewed, testing correctly spotted antibodies in infected people only 90% of the time, the report found.

In the meantime, economic hardship from the coronavirus-linked lockdown continues. The U.S. House passed a $484 billion deal last week that would replenish a small business loan program that has run out of funding. The bill also directs more money to hospitals and COVID-19 testing.

Despite the pain that battling the new coronavirus has exacted on the economy of the United States, an AP poll found Americans remain overwhelmingly in favor of stay-at-home orders and other efforts to slow the spread of the coronavirus.

The survey, released last week by the Associated Press-NORC Center for Public Affairs Research, also finds a majority of Americans say it won’t be safe to lift those measures anytime soon.

Even so, governors across America are crafting plans to start to ease social distancing in the coming weeks.

Those plans are afoot even though new estimates from Harvard University researchers suggest that the United States as a whole cannot safely reopen until health officials triple the number of coronavirus tests now being conducted, the Times reported.

New York remains the epicenter of the coronavirus outbreak in the United States, though key COVID-19 statistics have been leveling off.

The state has started to contemplate a gradual reopening in some areas in May.

“We are turning the valves on reopening,” Cuomo said in a briefing this week.

In preparation for any reopening in the coming weeks, Cuomo has announced that the state will implement the “most aggressive” antibody testing program in the country, CBS News reported.

Cuomo has also issued an executive order stating all New Yorkers must have a mask or mouth and nose covering when they are not maintaining social distancing in public, CBS News reported.

Cases spread in U.S. and globally

California appeared poised to close all of its parks and beaches on Friday after residents flocked to the ocean during a heat wave last weekend, the AP reported. On Wednesday, Los Angeles Mayor Eric Garcetti announced that the city will offer free coronavirus testing to all residents, regardless of whether they have symptoms. Los Angeles is the first major city to offer such widespread testing, the wire service said.

On a hopeful note, Chinese health officials said this week that Wuhan, the original epicenter of the pandemic in China, has no coronavirus patients in its hospitals.

South Korea and Hong Kong also appear to have curbed coronavirus for now: On Thursday, South Korea reported that for the first time since the virus’s Feb. 29 peak, there were no new domestic cases and only four travel-related ones. The story was similar in Hong Kong, which on Thursday reported no new cases for five straight days, the Times reported. The city had a resurgence in infections in late March that prompted strict lockdowns on travel, social distancing measures and the widespread adoption of work-from-home policies, the newspaper said.

Elsewhere in the world, the situation remains challenging. After publishing new numbers that now include deaths outside of hospitals, the U.K. posted the third-highest coronavirus death toll in the world, at more than 26,000, the AP reported. That country has now leapfrogged Spain and France in Europe, with only Italy still ahead, the wire service said. The United States still has the world’s highest death toll, at nearly 61,000.

Spain reported 24,275 deaths by Thursday, despite signs the infection rate is slowing, the Johns Hopkins University tally showed. Deaths in Italy also remain high at more than 27,682, although numbers have leveled off there as well. Both countries are cautiously reopening their economies.

Meanwhile, signs emerged that the virus has been all but vanquished in New Zealand and Australia, while Brazil looks like it could become the next hotspot in the coronavirus pandemic, the AP reported.

By Thursday, the South American country had reported more than 5,500 deaths and over 79,000 confirmed infections, according to a Johns Hopkins tally. But the true numbers are believed to be vastly higher.

Russia was also struggling to contain the spread of coronavirus, as the case count in that country surpassed 100,000 on Thursday, increasing by over 7,000 within 24 hours, the Post reported. Moscow remains the most virus-stricken part of the country, but there are growing concerns that infections could surge in more remote regions with weaker health systems, the Post reported.