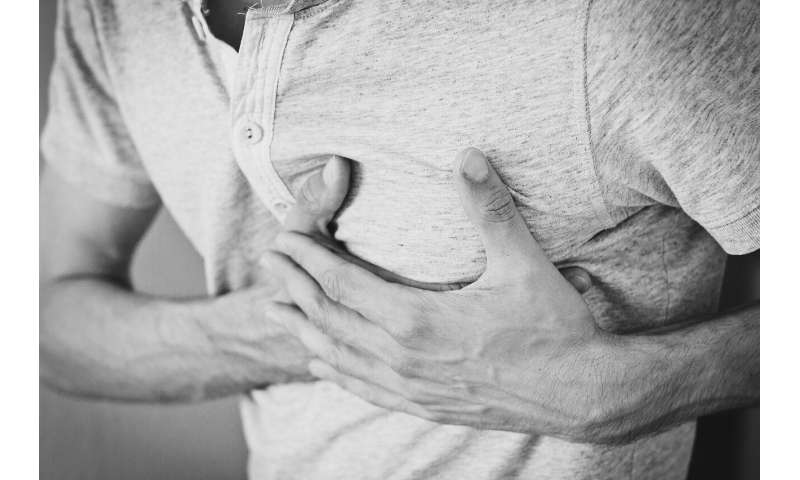 New research from University of Alberta cardiologists suggests that treating one of the most serious types of heart attack with clot-busting drugs along with the current primary treatment may lead to better health outcomes for patients.

When a patient’s coronary artery is completely blocked, cutting off blood to a large part of the heart—which is an ST-segment elevation myocardial infarction, or STEMI—the primary treatment is to insert a balloon catheter into the blocked vessel to expand it and restore blood flow.

Interventional cardiologist Kevin Bainey and his team reviewed data from more than 5,000 Edmonton-area patients between 2006 and 2016 who were admitted to hospital for STEMI-type heart attacks.

“This goes against the grain in terms of what everyone believes,” said Bainey, who is also an associate professor of medicine in the Division of Cardiology.

In Bainey’s study, published in Circulation: Cardiovascular Interventions, the team analyzed data from the Alberta Vital Heart Response Program, an Alberta Health Services program that collects information on all STEMI patients admitted to Edmonton-area hospitals from northern Alberta. The information includes whether a patient was administered any clot-busting drugs before arriving at the hospital, or if they received primary PCI treatment only.

The team compared patient outcomes between the two approaches, including whether patients had additional heart problems in the year after treatment, suffered side-effects such as major bleeding, or ultimately died.

“We’ve also designed a pharmacoinvasive strategy where patients over the age of 75 are given a half-dose of drugs in the ambulance, and that’s something no one else in the country is doing,” Bainey said.

“We found that it seems to work just as well as the full dose—and reduces the risk of adverse side-effects such as bleeding in the brain—and that’s really exciting. It leads to the bigger question of, “Does the half-dose strategy work for all people, and can we lower the threshold age from 75 to maybe 60?'”

Though he’s excited by the results, Bainey said he’s not entirely surprised. He noted Edmonton is one of the few regions that strongly endorse a pharmacological approach when treating STEMI patients, with paramedics allowed to administer drugs in the ambulance in consultation with a cardiologist. He believes this is one of the reasons Edmonton has the lowest mortality rate for heart attacks in Canada.

“Our approach in Edmonton has been to give clinicians the opportunity to choose the right therapy for the right patient,” he said. “In other systems of care, there’s only one option, which is primary PCI.

“Bottom line: If you’re going to have a heart attack, it’s probably best to have it in Edmonton.”

Bainey is hopeful the study’s findings will encourage more health experts across the country to include a pharmacoinvasive approach in the treatment of STEMI patients.