Texas Schools Are Providing DNA Kits to Identify Students & As the Mom of a Kindergartner, I'm Terrified 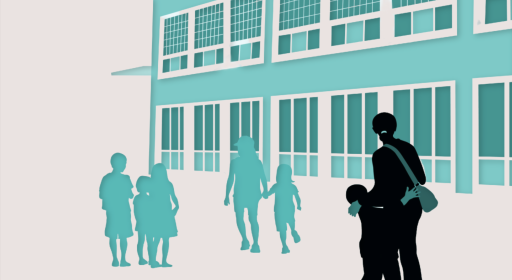 “Mama, today we had a bad guy drill at school. But there were no real bad guys,” my 5-year-old whispered before bed a few weeks ago as I was tucking him in. This kid knows more about dinosaurs than I do and plans on visiting outer space one day. He also checks to verify our neighbors’ Halloween decorations aren’t actually real and wants me to confirm almost nightly that monsters live really, really, really far away from our Texas house. But now my newly-minted kindergartner is asking about real monsters at his school, and I can barely control my tears.

How do I tell my son that monsters are real — and they could come into his classroom any day and kill him?

What do I answer when my constantly-curious son asks why he has to fill out a fingerprint kit that his teacher stuffed in his backpack at school? That the grown-ups like Governor Greg Abbott who are supposed to protect kids aren’t actually doing anything about it? Instead, they are making it easier to identify victims of gun violence whose bodies have been so destroyed by assault weapons it’s impossible to ID them any other way. It’s sickening.

Thanks to Senate Bill No. 2158 passed in 2021, the Texas Education Agency is now required “to provide identification kits to school districts and open-enrollment charter schools for distribution to the parent or legal custodian of certain students.” These DNA kits are optional and can be kept at home until a school requests them … as if that makes it better.

If it’s getting hard to keep track of all the Texas school shootings, that’s because Texas has had the most school shootings in the country since 2012. Not coincidentally, Republican Greg Abbott was elected in 2014 — a Governor who claims to be “fighting for Texas families and Texas values,” but who has actually loosened gun laws over the years, including passing permitless carry in 2021.

The week following the horrific gun violence in Uvalde saw an influx of gun and bomb threats at local schools in Texas. My cousin heard on TikTok that people were going to shoot up his school, so he stayed home. My sister called me from my 3-year-old’s preschool where she also works because they went on lockdown due to a “suspicious character.” I immediately went and picked him up — along with my sobbing sister — just in case. Both incidents turned out OK, but what if they didn’t? Living in constant fear of something happening to your kids (or living as a kid in constant fear for your own safety at school) is horrible.

A few weeks after my 7-month-old baby started daycare in September, someone broke into the church building, shattering the glass near the rooms where I drop my son off every day. Luckily, everyone was fine and the women who worked there were able to redirect the trespasser. I showed up to dropoff to find the school surrounded by fire trucks, police cars, and ambulances, and nearly choked on my coffee. I called my husband in tears and drove away. Not knowing what was going on — but knowing I live in Texas — I immediately feared an active shooter situation. I didn’t take my kids to school until after receiving an email from the director informing parents of the situation and letting us know it was safe.

That’s what living in Texas does to a parent. Just seeing an emergency vehicle near the school triggers a deep-seated fear that your child might not be alive. Instead of school dropoff being what it should be — a normal occurrence that I don’t think twice about — I’m terrified every day, and it makes me furious.

If I’m being completely transparent, the only way I’m able to do so and carry on with day-to-day activities without suffering extreme panic attacks is a combination of therapy and anti-anxiety medication. I live under a constant cloud of anxiety every time my phone rings from one of my kids’ schools.

“Hello, is everything OK?” I immediately asked when someone from my son’s kindergarten called two weeks ago. Thankfully, my son had just fallen off the playground and cut his head. I only had to worry about possibly stitches and a concussion, nothing more. Something that would typically be scary was almost a relief. Oh, thank God it wasn’t a shooter; just a four-foot fall that left my son screaming with blood all over his face. But he and all his friends are OK, and that’s all that matters because the bar is actually that low.

I am by far not the only parent who loses sleep over this — and is now horrified by this flimsy and, frankly, offensive new initiative to “keep kids safe.”

“I worry every single day when I send my kid to school,” veteran, former CIA and FBI agent Tracy Walder told TODAY regarding the DNA verification kits. “Now we’re giving parents DNA kits so that when their child is killed with the same weapon of war I had when I was in Afghanistan, parents can use them to identify them?”

“This sends two messages,” she continued. “The first is that the government is not going to do anything to solve the problem. This is their way of telling us that. The second is that us parents are now forced to have conversations with our kids that they may not be emotionally ready for. My daughter is 7. What do I tell her?”

What, indeed? It’s the same question I, along with many others in this unfortunate position, have grappled with countless times.

After the Uvalde school shooting, I called my mom in a panic. It was only a few months before my husband and I would send our son to kindergarten. We went from excited about new beginnings (and not having to pay for daycare anymore!), to devastated for the families of the victims and scared of my own son’s future.

His elementary school emailed all parents to let us know they were “taking action” after Uvalde, which ultimately meant increasing the police presence. Right, because the police in Uvalde did such a good job stopping the shooter.

My own family members tried to convince me that it was a problem with … doors. “Oh, one teacher left a door open, that’s the only reason.” Or, “teachers need to just start carrying guns.” None of that was particularly helpful or reassuring for someone who was about to send their baby to school for the first time, a place which felt more like a minefield.

My mom suggested I homeschool, reminding me that school shooters were a big part of why she decided to homeschool me and my five siblings. But it was also not an option for me as a full-time freelancer.

I don’t want to live in fear. I don’t want my kids to miss out on opportunities to play, grow, and learn with peers in a classroom. I also don’t want to have conversations about real bad guys with guns — and the real bad guys who make it easier for them to get guns — with my 5-year-old. But I don’t have a choice because Texas leaders have given up on helping the kids. They’ve washed their hands, but they can never get the bloodstains out from the countless kids and adults who’ve died at their senseless, dangerous laws. They’ve let Texas parents know that no, actually they don’t care about your kids. But they do care about helping police identify their bodies after massacres have occurred (which they know will continue to happen).

These DNA kits aren’t a reassurance of safety — they’re a promise that Greg Abbott and others like him will continue to do worse than nothing to help our kids. They will choose guns over kindergartners every single time, and it makes me want to scream.

As a mom, I will never stop fighting for my kids to protect them against gun violence and the politicians who make it so much easier to be killed in school.

Visit Everytown for Gun Safety and Moms Demand Action for more information on how you can help.

We celebrate strong women every day! Here are the books about some of the most iconic..