Brits could save almost a day’s worth of calories by switching their main meals at restaurants, experts say.

Ordering seabass instead of fajitas at Chiquito’s, chicken ramen over a vegan curry at Wagamama’s or quinoa instead of steak at Frankie and Benny’s can stamp out up to 1,700 calories.

This is because one meal alone at the country’s best-loved chains can contain up to a whopping 2,000-plus calories, while the leanest options can contain less than 250.

Leading experts today said that while diners would have to swap ‘not exactly similar meals’ and select one that is not as filling, they could save almost a day’s worth of calories in doing so. 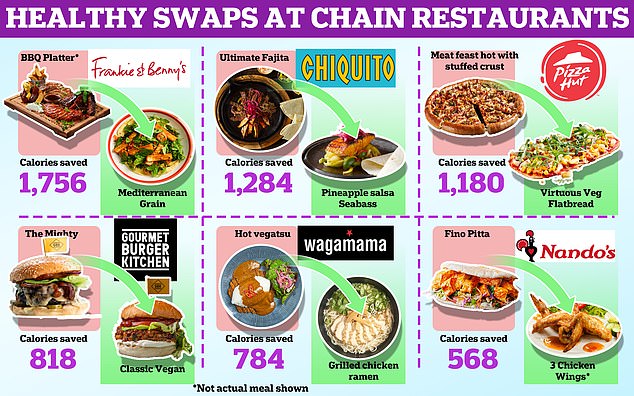 Ordering seabass instead of fajitas at Chiquito’s, chicken ramen over a vegan curry at Wagamama’s or quinoa instead of steak at Frankie and Benny’s can stamp out up to 1,700 calories

• Base meals on potatoes, bread, rice, pasta or other starchy carbohydrates, ideally wholegrain

• Thirty grams of fibre a day. This is the same as eating all of the following: Five portions of fruit and vegetables, two whole-wheat cereal biscuits, two thick slices of wholemeal bread and a large baked potato with the skin on

• Have some dairy or dairy alternatives (such as soya drinks), choosing lower fat and lower sugar options

• Eat some beans, pulses, fish, eggs, meat and other proteins (including two portions of fish every week, one of which should be oily)

• Choose unsaturated oils and spreads and consuming in small amounts

• Drink six to eight cups/glasses of water a day

MailOnline examined the most and least calorific options at 12 popular high-street chains, including Nando’s, TGI Friday’s and Pizza Express.

The biggest calorie-saving could be made at Frankie and Benny’s by ordering the Mediterranean Grain bowl (435 cals) — a dish that is packed with rice, quinoa and vegetables — instead of the BBQ Platter (2,191), which includes a steak, chicken goujons, ribs and sides.

This swap would save 1,756 calories — nearly all of the 2,000 calories an average woman needs per day to maintain a healthy body weight.

This is the equivalent to five-and-a-half McDonald’s Cheeseburgers (298).

Those looking to eat healthier when out could save 1,519 calories by ordering the Zizzi Super Zucca Salad (316) — made from roasted butternut squash, goat’s cheese and lentils — instead of the Herb Rolled Pork Belly, served with crackling, carrots and potatoes (1,853).

At Chiquito, opting for the Pineapple Salsa Seabass (471) — a fillet with roast vegetables and salsa — over Fajitas (1,755) — with chicken, pulled pork and steak — would cut 1,284 calories from a person’s daily intake.

While many may assumed that a vegan curry at Wagamama is a healthy option, it is actually the most calorific item on the menu.

But the grilled chicken ramen — made with marinated chicken, noodles and chicken broth — has just 498, meaning diners can save 784 calories by swapping their main.

Diners who order Chicken Wings and salad (249) at Nando’s instead of it’s Fino Pitta (817) — chicken and halloumi in pitta bread — will save 581 calories.

Duane Mellor, a registered dietitian and researcher at Aston Medical School in Birmingham, told MailOnline it ‘might appear to be a good thing to see calories on menus’ if diners save calories.

But he noted: ‘The problem is this would mean swapping from an Empire State burger to a quinoa salad — not exactly similar meals.

‘Although there are examples where a pasta dish might be a swap for a macaroni cheese.

‘Many very high calorie meals are different to the lightest options which are quite often salads.’

Mr Mellor added: ‘When eating in a restaurant, it is important to put the meal in perspective.

‘If it is once every couple of weeks, it is the food you are eating the rest of the time that is more important.

‘When eating out, remember to enjoy what you eat, try to include plenty of vegetables and salad, and if you are trying to eat a little more healthily, be aware of sauces which might contain additional fat, salt and in some cases sugar.’

Professor Gunter Kuhnle, an expert in nutrition at the University of Reading, told MailOnline that the meals with low calories are likely ‘not as filling as the others’ and may even lead to people eating more as a result.

Calorie counting is pointless and exercise on its own WON’T help you lose weight. They were the two bombshell claims made by a top diet expert… but are they actually true? 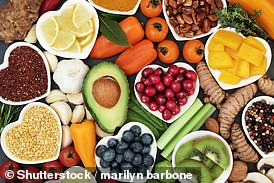 Professor Tim Spector advocated that dieters should focus on making sure their plates are full of the high quality wholefoods — such as fruit, vegetables and nuts

He noted that the calorie difference between the mains is ‘quite large’.

Professor Gunter said: ‘The list shows very well how easy it is to overeat and in that context, calorie labels are probably a good idea to make consumers aware.

‘However, there are some issues with calorie labels as they might cause problems for people with eating disorders and they’re not as accurate as they appear on the menu.’

Zoe Davies, a nutritionist at campaign Action on Sugar, told MailOnline: ‘Whilst diners can sometimes request lower calorie options, companies should actually make sure they reduce the excessive levels of calories in the options they offer.’

This would help diners to ‘choose what they want rather than what they feel they have to’, she said.

‘The food industry is highly capable of reducing the number of calories in some of their popular dishes yet sadly not all restaurant chains are complying,’ she added.

Under rules brought in last April, chains with 250 or more staff must display calorie counts on physical and online menus.

The measure was brought in as part of the Government’s obesity strategy, in a bid to help the public make ‘more informed’ and ‘healthier’ choices when eating out and ordering takeaways.

However, critics warned it could fuel eating disorders and argued calories consumed when dining out is not the driver behind weight gain.

Some even pointed to studies which showed men may seek out higher-calorie options on menus as they view those meals as better value for money.

Around two-thirds of over-16s in England are overweight or obese,  while one in three 10 and 11-year-olds are obese.

The obesity epidemic is estimated to take up £6.1billion of the NHS budget every year due to illnesses and disease linked to people’s weight. The figure is set to rise to £9.7billion per year by 2050, as the nation becomes even fatter.

Being an unhealthy weight raises the risk of serious and life-threatening conditions, such as type 2 diabetes, heart disease, some cancers and strokes.