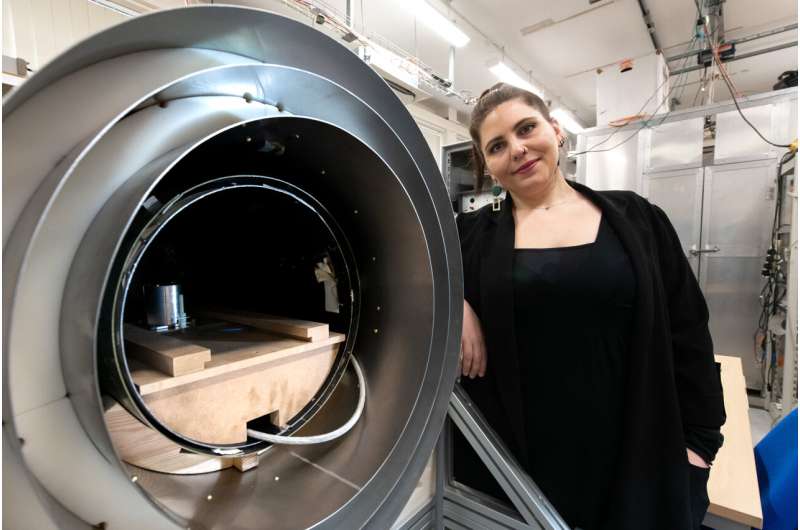 New highly sensitive quantum sensors for the brain may in the future be able to identify brain diseases such as dementia, ALS and Parkinson’s, by spotting a slowing in the speed at which signals travel across the brain. The research findings from a paper led by a University of Sussex quantum physicists are published in Scientific Reports.

The quantum scanners being developed by the scientists can detect the magnetic fields generated when neurons fire.  Measuring moment-to-moment changes in the brain, they track the speed at which signals move across the brain.  This time-element is important because it means a patient could be scanned twice several months apart to check whether the activity in their brain is slowing down. Such slowing can be a sign of Alzheimer’s or other diseases of the brain.

In this way, the technology introduces a new method to spot bio-markers of early health problems.

Aikaterini Gialopsou, a doctoral researcher in the School of Mathematical and Physical Sciences at the University of Sussex and Brighton and Sussex Medical School is the lead author on the paper. She says of the discovery that “We’ve shown for the first time that quantum sensors can produce highly accurate results in terms of both space and time. While other teams have shown the benefits in terms of locating signals in the brain, this is the first time that quantum sensors have proved to be so accurate in terms of the timing of signals too.”

“This could be really significant for doctors and patients concerned with the development of brain disorders.”

These quantum sensors are believed to be much more accurate than either EEG or fMRI scanners, due in part to the fact that the sensors can get closer to the skull.  The closer proximity of the sensors to the brain can not only improve the spatial, but also the temporal resolution of the results. This double improvement of both time and space accuracy is highly significant as it means brain signals can be tracked in ways that are inaccessible to other types of sensors.

“It’s the quantum technology which makes these sensors so accurate,” explains Professor Peter Kruger, who leads the Quantum Systems and Devices lab at the University of Sussex. He adds that “the sensors contain a gas of rubidium atoms. Beams of laser light are shone at the atoms, and when the atoms experience changes in a magnetic field, they emit light differently.  Fluctuations in the emitted light reveal changes in the magnetic activity in the brain. The quantum sensors are accurate within milliseconds, and within several millimeters.”

The technology behind the scanners is called magnetoencephalography (MEG). Combining MEG tech with these new quantum sensors has developed a non-invasive way to probe activity in the brain. Unlike existing brain scanners—which send a signal into the brain and record what come back—MEG passively measures what is occurring inside from the outside, eliminating the health risks currently associated for some patients with invasive scanners.

Currently MEG scanners are expensive and bulky, making them challenging to use in clinical practice. This development of quantum sensor technology could be crucial for transferring the scanners from highly controlled laboratory environments into real-world clinical settings.