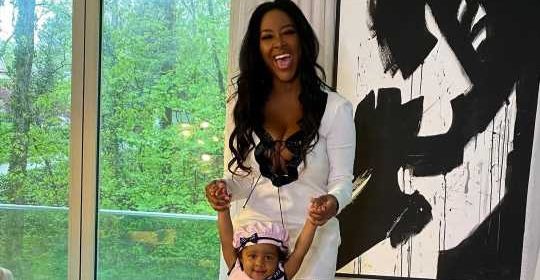 Perfect priorities. Kenya Moore clapped back at claims that she shouldn’t have left her costars to fend for themselves on a cast trip while caring for her 2-year-old daughter, Brooklyn.

Witney Carson and More Moms Clap Back at the Parenting Police

“I did apologize,” the Real Housewives of Atlanta star, 50, tweeted on Sunday, February 14. “This is purely disrespectful, passive aggressive and nasty. I don’t have help at home. I put my child FIRST. Brooklyn will always be No. 1.”

The Bravo personality added that Porsha Williams, Kandi Burruss the other moms on the South Carolina trip “were told they could” bring their own little ones. “I have taken my child on every single cast trip. We don’t need permission to bring our children. If they wanted their children their [sic], they would be there.”

In Sunday’s episode, Moore ditched a game of “Never Have I Ever” to pick up Brooklyn from her nanny upstairs. When Burruss, 44, followed the Michigan native, Moore clarified that she had no plans to come back downstairs.

The singer told the rest of the women that this “just pissed [her] off,” explaining, “This is all a double standard thing that’s happening right now and I’m not with it.”

Williams, 39, chimed in, “Kenya does have money, Kenya does afford herself nannies, and even if you couldn’t afford anything else, you could afford some common damn sense. Kenya is synonymous with selfish. Listen, I get where Kenya’s coming from. But her being the host, she should’ve given all of us the option to bring our kids or not.”

The following day, Moore told her costars that since her split from Marc Daly, she doesn’t “have a village” to take care of her toddler. “For me, it’s just been really stressful, and I told you that,” the Game, Get Some author explained tearfully. “It has been over a year since Marc and I have been separated. As a separated person who has a child all the time, it’s just me. The decisions I make are not because I want to, it’s because I have to. I don’t have a choice.”

She went on to apologize, noting that anyone judging her for taking care of Brooklyn should feel “shameful.”

Moore gave birth to her baby girl in November 2018 and announced her split from Daly, 50, in September of the following year. While they later reunited, the former couple broke up again last month.