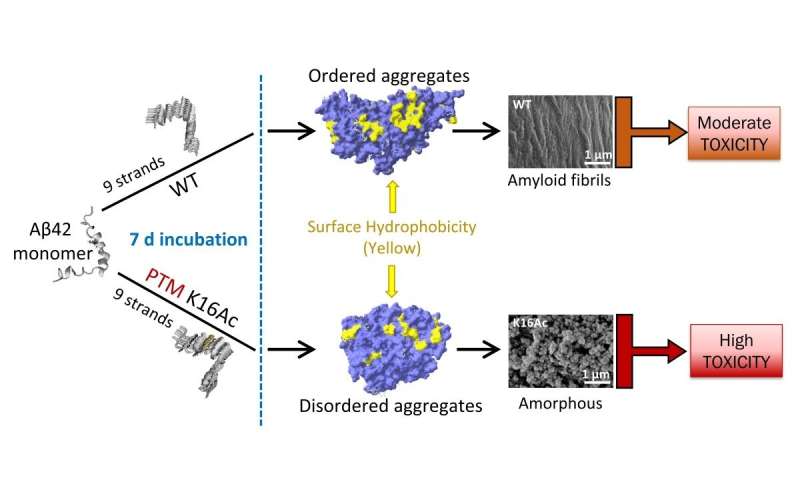 Sometimes proteins misfold. When that happens in the human brain, the pileup of misfolded proteins can lead to neurodegenerative diseases like Alzheimer’s, Parkinson’s and ALS.

Proteins do not misbehave and misfold out of the blue. There is a delicate ecosystem of biochemical interactions and environments that usually let them twist, unfold, refold and do their jobs as they’re meant to.

However, as researchers from Michigan Technological University explore in an article published in ACS Chemical Neuroscience, even a small change may cause long-term consequences.

For amyloid beta peptides—considered a major hallmark of Alzheimer’s disease—a common chemical modification at a particular location on the molecule has a butterfly effect that leads to protein misfolding, aggregation and cellular toxicity.

To understand what causes the different shapes and to assess their toxicity, Tiwari’s team looked at acetylation.

Acetylation is one of the most common chemical modifications proteins undergo, but one of the least researched in terms of how it affects amyloid beta toxicity. On amyloid beta proteins, acetylation can occur at two sites: lysine 16 and lysine 28. 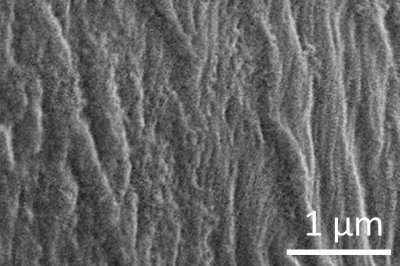 The team found that acetylation at lysine 16 led to the disordered aggregates that formed sticky but flexible amorphous structures and showed high levels of toxicity. They also found the aggregates showed higher free radical formation.

“No one has done a systematic study to show if you acetylate amyloid beta it changes how the aggregate looks, then it changes its biophysical properties and hence toxicity,” Tiwari said. “What we’re saying is that the shape, stickiness and flexibility of the aggregated protein structure can play a vital role in the cellular toxicity and may also affect the mechanism of toxicity.”

In Alzheimer’s, these aggregates accumulate in the part of the brain that affects memory. It’s a disease that the Alzheimer’s Organization reports is the sixth leading cause of death in the US and will cost the nation about $305 billion in 2020. Tiwari says what we truly need to understand about the disease is that there is no single cause, no single trigger, and probably no silver bullet because of the chemistry involved.

“This is how a subtle change on a single position can affect a whole protein’s aggregation,” Tiwari said, adding that the effect of acetylation on tau, another protein aggregation, has been far more studied than amyloid beta. Also, many researchers still think a misfolded protein has to look a certain way to become problematic, and that other misfolded forms are less of an issue.

Tiwari agrees some of the proteins’ changes are subtle, and compares discerning the differences and their effects to snow tires. Snow tires have deeper treads and a more flexible material to handle winter roads, but it’s hard to point out those features at highway speeds. Like different kinds of tires, protein shapes can appear indistinguishable at a distance.

“This is not something that can be viewed from afar—it’s a touch-and-feel property,” Tiwari said. “We have to interrogate these properties. We have to look at these structures more deeply from both morphology and biophysical perspectives.”