Get an ‘artificial pancreas’ on the NHS: 100,000 type 1 diabetes sufferers are set to get pioneering gadget that may spell end of finger-prick blood tests

More than 100,000 people with type one diabetes will be offered an ‘artificial pancreas’ after regulators approved its use on the NHS.

The device monitors blood sugar levels and uses an algorithm to determine the amount of insulin that should be administered to keep blood sugars steady.

Some 105,000 people who struggle to monitor their diabetes will now be offered the devices after they were given the green light by watchdog NICE. 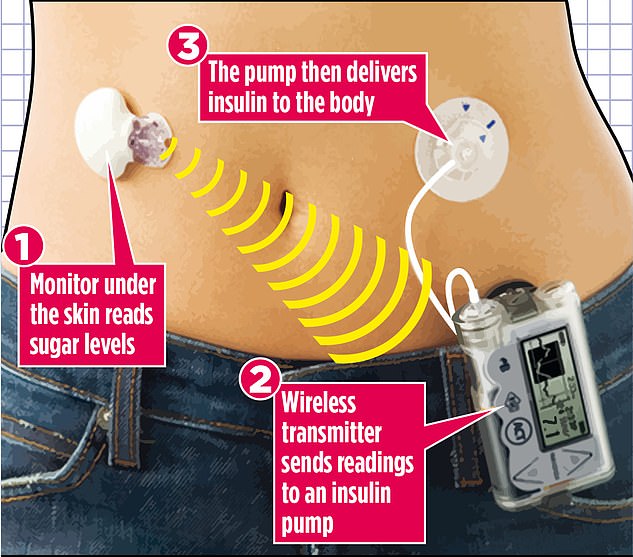 An artificial pancreas to manage type 1 diabetes could soon be offered to NHS patients after a major trial produced ‘blisteringly brilliant’ early results. The high-tech kit continuously monitors glucose levels via sensors under a patient’s skin and, when needed, automatically delivers insulin to the bloodstream – a job normally carried out in the body by the pancreas

Experts hailed the technology as ‘lifechanging’ – with the potential to make amputations, blindness, and kidney problems for these patients ‘a thing of the past’.

Professor Partha Kar, diabetes specialist at NHS England, said: ‘This technology has been proven to give the best control for managing type 1 diabetes and should make things like amputations, blindness, and kidney problems possibly a thing of the past.

‘We have seen fantastic results from the real-world trials which have taken place and thank you to NICE for their review of the evidence and subsequent conclusions. The quality of life this technology gives to those using it is huge.’

Nearly 300,000 people in England and Wales are estimated to be living with type one diabetes, an autoimmune disease where the body stops producing insulin needed to regulate blood sugar levels.

How will the ‘artificial pancreas’ work?

The technology – which costs less than £5,000 per patient – uses a ‘hybrid closed-loop system’ sensor to continually monitor blood glucose.

The sensor wirelessly transmits readings to the high-tech insulin pump which runs a mathematical calculation to work out how much insulin needs to be delivered at a time into the body to keep blood glucose levels within a healthy range.

The body worn insulin pump then automatically delivers insulin into the bloodstream.

Until now, sufferers had to regularly measure blood glucose levels by using finger-prick blood testing or by using a continuous glucose monitor, then manage levels with multiple daily insulin injections.

This can be particularly challenging for children given the variations in the levels of insulin required and the unpredictability that surrounds how much youngsters eat and exercise.

They are at higher risk of dangerously low blood sugar levels (hypoglycaemia) and high ones (hyperglycaemia), which can cause damage and even prove fatal.

This technology – which costs less than £5,000 per patient – uses a ‘hybrid closed-loop system’ to continually monitor blood glucose and automatically adjust insulin levels via a pump.

Patients, including children, will be eligible if their long-term average blood glucose levels indicate they are at risk of long-term complications.

Expectant women will also be offered the devices as blood glucose levels are harder to manage during pregnancy.

Nikki Joule, of Diabetes UK, said: ‘Type one diabetes can take a huge mental toll, with people manually calculating how much insulin they need regularly throughout the day.

‘By automating these calculations, hybrid closed-loop technology can greatly alleviate the emotional burden of diabetes.‘

Mark Chapman, of NICE, said: ‘Some people living with type one diabetes struggle to manage their condition, even though they are doing everything asked of them by their diabetes team.

‘This technology is the best intervention to help them control their diabetes, barring a cure.’

In other health news…