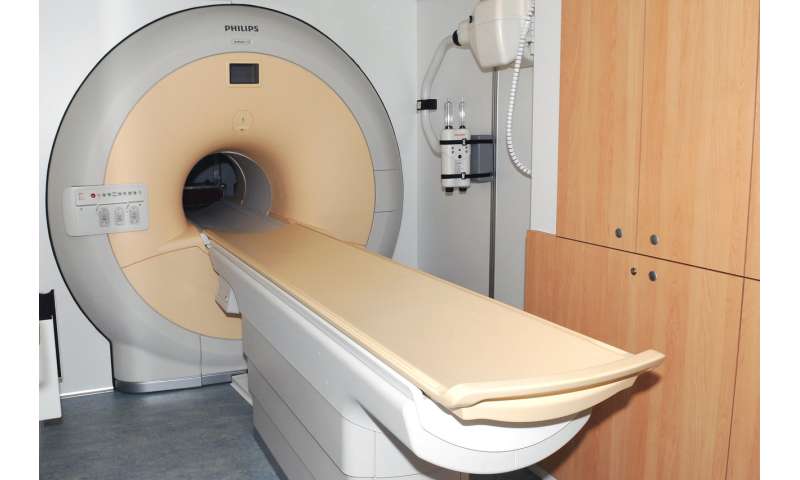 Thoughts, sensations, and emotions zap across the brain via a meshwork of fine nerve fibers called axons. Axon size is crucially important for general brain function as well as in certain neurological conditions. Experts have been striving to establish a means to noninvasively measure these fibers for many years. An international team of researchers has now developed a novel MRI method that manages to do just that.

The wiring network of the brain is made up of billions of nerve fibers called axons. The thickness of axons—together with other properties—significantly impacts the way in which they conduct neural signals, and therefore the overall processing speed of connected neurons and brain areas. In addition, many neurodegenerative conditions, such as multiple sclerosis and Alzheimer’s disease, as well as conditions such as cancer, brain injury, and stroke, are known to exhibit axonal damage.

It is clear that axons are crucially important for the functioning of the brain, but they are also rather mysterious. They are so thin (mere micrometers in diameter) that probing them non-invasively inside a living brain has been, until now, impossible.

A new collaborative study by researchers working at the NYU Grossman School of Medicine in the USA, Champalimaud Centre for the Unknown in Portugal and the Cardiff University Brain Research Imaging Centre (CUBRIC) in the UK, established a way to measure these microscopic wires using MRI (Magnetic Resonance Imaging). Their results were published in the scientific journal eLife.

What was the breakthrough that led the team to overcome this long-standing challenge? Jelle Veraart, the first author of the study, explains that the key was to find a way to tease apart two types of signals: those originating from inside of the axons, and those arising from the surrounding tissue.

“MRI primarily works by detecting signals of water molecules, which constitute about 80% of the human brain. Axons have water inside of them, but so does the tissue that surrounds them. So we, in the MRI Biophysics Group at the NYU Grossman School of Medicine, developed a method that preferentially suppresses the signal everywhere but in the axons. Specifically, we modelled how the water signal behaves in different parts of tissue. Then, we measured the properties of the axons in the sample using the residual signal, which corresponded only to them,” Veraart explains.

But a model remains theoretical until it is validated. The team therefore tested the model using preclinical ultra-high MRI scanners and microscopy at the Champalimaud Centre for the Unknown. Once the model was verified using this state-of-the-art technology and methodology, the researchers moved on to the next step—applying it to humans. “We performed this phase in collaboration with Derek Jones at the Cardiff University Brain Research Imaging Centre, where they have special MRI equipment that is powerful enough to evoke the robust signals needed for this kind of measurement,” says Veraart.

The results of the method were outstanding—whereas previous studies yielded measurements that were an order of magnitude larger than known axonal sizes, the team’s measurements were unprecedentedly accurate—only a 10-15% error—in their estimate of the same features.

What was the source of the error? “We conduct our measurements in areas of ‘white matter.’ It’s called that because it primarily consists of axons, which have a whitish color. Within one cubic millimeter of tissue, there are tens of thousands of axons. Our measurements estimate an averaged metric of all axons, and tend to be dominated by the larger axons in the tissue sample,” explains Dmitry Novikov, of the NYU Grossman School of Medicine. “Furthermore, there are other features which might ‘masquerade’ as axons in our signals, such as the ‘arms’ of other types of cells in the brain called astrocytes.”

Now that the method has been established, the researchers are thinking about the next steps. “The in-vivo quantification of axon diameters with MRI paves the way to a new line of research,” says Noam Shemesh, of the Champalimaud Centre for the Unknown. “MRI is non-invasive, and so it can be used to safely perform studies that follow changes in axons over extended periods. The more we learn about these structures, the closer we are to understanding how the brain works, in health and disease.”