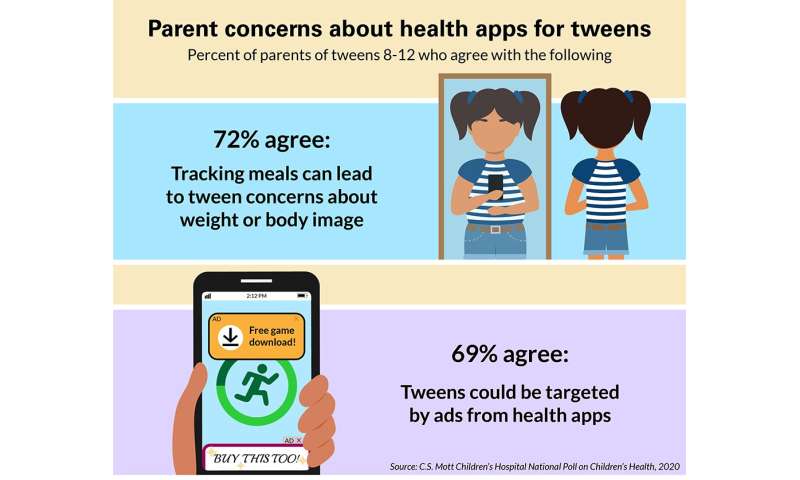 Health apps have become a popular tool among teens and adults to track fitness, weight loss, sleep and even menstrual cycles—but are they appropriate for tweens?

Most parents say they have concerns about how health apps may impact children ages 8-12, according to the C.S. Mott Children’s Hospital National Poll on Children’s Health at Michigan Medicine. But despite concerns, most parents aren’t against tweens using apps.

Two-thirds of parents of tweens worry about ads with inappropriate content targeting kids and three fourths agree that having children track what they eat may lead them to become too concerned about their weight or body image.

Still, just 19 % of parents say they wouldn’t allow their child to use an app with games about health while 32% would say no to apps offering health tips or coaching and 38% would prohibit apps tracking health information. And most parents agree that using an app may help tweens develop healthy behaviors.

The nationally representative report is based on responses from 832 parents who had at least one child ages 8-12.

“Health apps are widely used among both adults and teens, but we don’t have much information on tween use,” says Mott Poll co-director Sarah Clark, M.P.H. “There are many considerations for allowing younger children to use these apps, including privacy concerns, exposure to advertisements and the potential for children to become overly focused on food and weight.”

“We found that parents had mixed opinions on health app use among tweens and recognized both the potential harms and benefits to their child’s health.”

Health apps include games that teach about health and devices that track health data, such as calories consumed or burned, exercise intensity, sleep and other health habits. Many apps allow users to set goals and give feedback on progress, as well as motivational messages or tips to improve health behaviors. 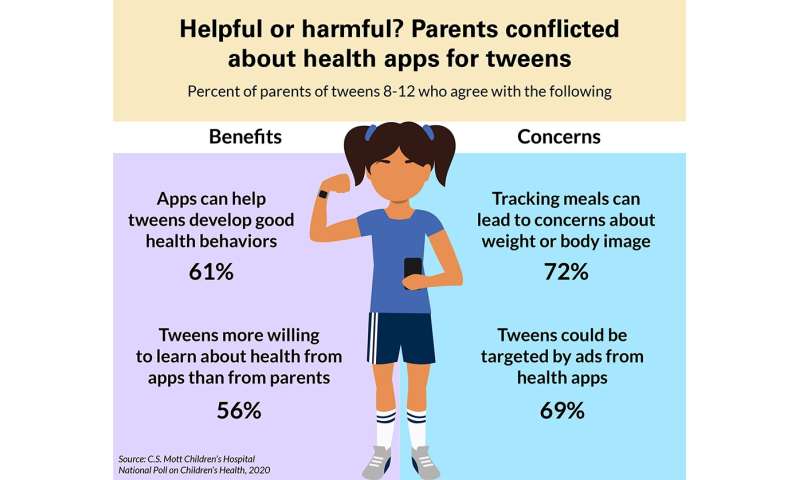 Nearly half of parents have used a health app themselves, but just 1 in 20 say their tween is using health apps, according to the report.

Despite laws designed to protect children’s privacy online, research has also shown that many apps contain advertising, collect and share personal information without verifying the age of the user or gaining parent consent. Parents should read the fine print on privacy policies when helping their tween choose a health app, and use settings that restrict data sharing, Clark suggests.

Another top concern is that tweens would use apps designed for teens or young adults and that advertising—including content targeting older ages involving alcohol, sexual activity or other inappropriate content—could reach younger children.

“Tweens look up to older teens and often want to view content designed for an older age group. It’s up to parents to look for information that indicate whether a health app is targeted specifically to younger children,” Clark says.

“Before their children use health apps, parents should do their research to make sure the strategies used to promote healthy habits are evidence-based and that the app is age appropriate.”

Before tweens begin using a health app that tracks food or calorie intake, experts also recommend parents and children have conversations about what the app is being used for. Parents might also consider using a similar health app for themselves as a way to maintain a dialogue about tracking health data.

“Research shows that eating disorders can begin during the tween years,” Clark says. “Parents should encourage their tween to talk about why they’re interested in tracking their food or calorie intake, and talk with them about healthy ways to use this information.”

While the majority of parents also say they want input from their tween’s health care provider on using health apps, only 3% have actually talked to a physician about it.