When Nicole Adams says ‘it’s great to be alive’, it’s impossible not to smile. From just about anyone else, it would be a pleasant, if fairly unremarkable platitude. But coming from the 28-year-old Belfast native, it is simply joyous.

For it’s no exaggeration to say that, just six months ago, Nicole’s life hung in the balance. As reported by this newspaper in December, she was critically ill with cystic fibrosis, the genetic disease that kills half of sufferers before they reach the age of 40.

She had been rushed into intensive care at Belfast City Hospital, and she was struggling for every breath as her lung function hovered at just 13 per cent.

At the time, she described the feeling as ‘like being suffocated by my own body’. 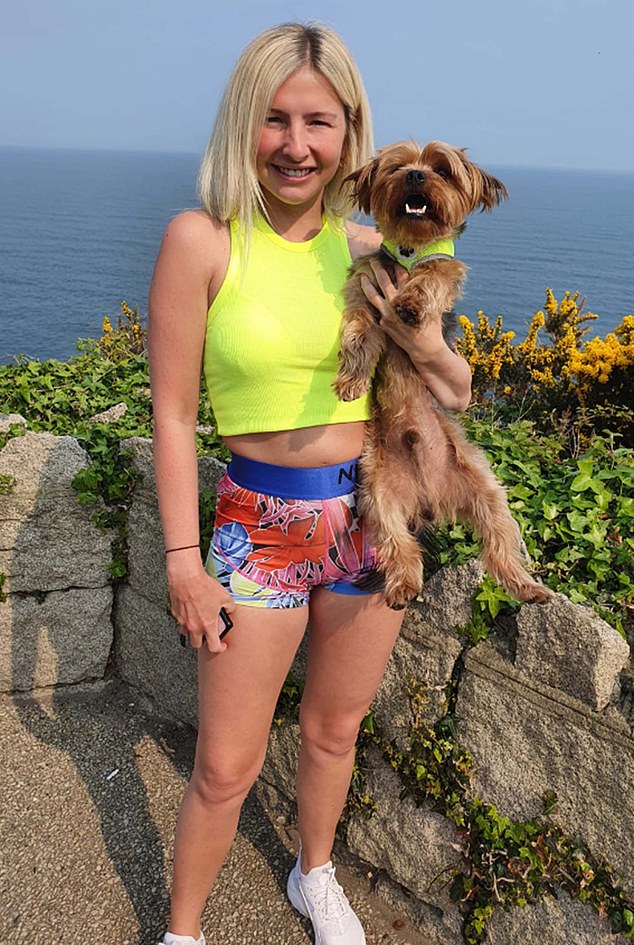 Back from the brink: Nicole Adams, pictured as she is today. She was critically ill with cystic fibrosis, the genetic disease that kills half of sufferers before they reach the age of 40

Her family and devoted boyfriend, local boxing star Ciaran McVarnock, had issued a desperate plea to US drug firm bosses to provide her with a breakthrough drug that was her only hope.

At that time, the medicine, Trikafta, had been available for months in America after stunning clinical trial results led to fast-track approval.

It dramatically improves lung function and has been dubbed ‘the holy grail’ by both patients and doctors who treat the disease.

But amid an ongoing row over its cost, it was not available to patients in the UK.

However, within days of hearing about Nicole’s desperate plight, the manufacturer, Vertex, agreed to side-step normal procedures and send her medical team the tablets she needed. That one simple act undoubtedly saved her.

‘I don’t remember much about being in intensive care, which I’m quite glad of,’ says Nicole now. ‘It comes back to me in flashes. I do remember Ciaran telling me that I was going to get Trikafta, and I hung on to that. It kept me going.’

Cystic fibrosis is an incurable genetic illness that causes the body to produce thick, sticky mucus that builds up in the lungs and digestive system. This means patients are vulnerable to severe lung infections and also have problems digesting food.

Nicole’s health had taken a turn for the worse after she was hospitalised with a bout of flu. Her illness had left her physically too weak to cough up enough mucus and clear her lungs – and she was slowly suffocating.

Trikafta works by allowing the body to produce normal, thin mucus, much like any healthy person.

Within hours of taking her first dose, Nicole began to feel different. 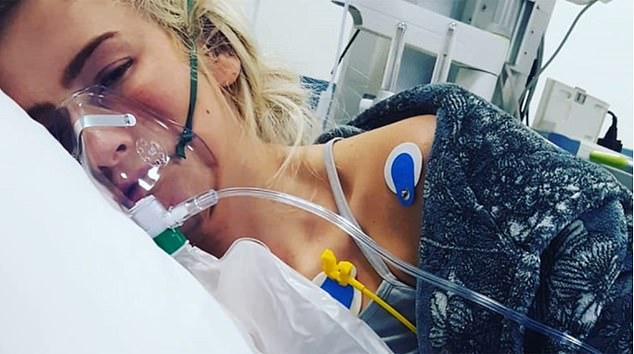 Nicole pictured in intensive care last year. She was rushed to Belfast City Hospital, and was struggling for every breath as her lung function hovered at just 13 per cent

‘When people first start taking Trikafta, they talk about “the purge” – and that’s what it’s like,’ says Nicole. ‘It’s as if all the mucus that’s been stuck in your lungs over a lifetime begins to come up.

‘Every time I moved, I would cough uncontrollably, and bring stuff up. At first, it was black and green and red – and gradually, every day, I felt like I could breathe a bit more.

‘By the end of the week, what I was coughing up was clear, and now I don’t really cough anything up at all.’

Due to the high risk that lung infections pose, cystic fibrosis patients are considered among the most vulnerable to Covid-19. They have been advised by the Government to ‘shield’ throughout the first stages of the pandemic, and not to leave the house even for exercise.

At the start of June, restrictions in Northern Ireland were relaxed, and Nicole has been making the most of her freedom and new-found fitness.

‘Before getting Trikafta, I wouldn’t even have considered running – I just couldn’t, because breathing was too difficult,’ she says.

‘But during the lockdown I got a treadmill. I started out doing a few minutes on, a few off, but now I’m running for up to half an hour with rests. In the past few weeks, Ciaran and I have gone on bike rides together – another thing I never dreamed I’d do again.

‘I’m still taking care but have gone out to meet a friend on one or two occasions. People who’ve read about me come up to me in the street and wish me well. It feels strange to say this during a pandemic, but it’s great to be alive.’ 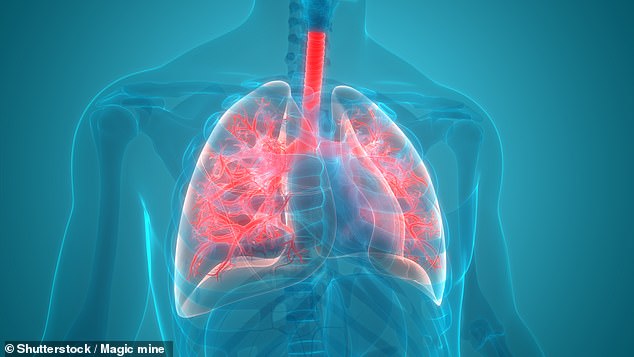 Due to the high risk that lung infections pose, cystic fibrosis patients are considered among the most vulnerable to Covid-19 (file photo of the human respiratory system)

Nicole is now passionate that every cystic fibrosis patient in the UK should have access to Trikafta.

‘The results of this drug are clear to see,’ she says. ‘I find it astonishing it’s not been made available.’

For the vast majority of British cystic fibrosis patients, the drug remains out of reach.

Last year we revealed how just days after Trikafta was given the green light in America, the NHS signed a ‘bargain bucket’ deal for older, less-effective cystic fibrosis drugs. The contract, for tablets Orkambi and Symkevi, was said to be the largest financial deal of its kind in NHS history – amounting to £100 million over two years.

But the row over cost, which began in 2017, had dragged on for so long that by the time the agreement was announced, at the end of October 2019, the medications were effectively obsolete.

Although Orkambi and Symkevi can stabilise cystic fibrosis symptoms and have the potential to slow a sufferer’s deterioration, Trikafta is four times as effective at improving lung function.

And while Orkambi and Symkevi work for fewer than 45 per cent of cystic fibrosis patients, Trikafta is effective in 90 per cent.

Clinicians say all patients on the older drugs will be switched to Trikafta once it is available – and there are hopes it will ultimately lead to a vastly extended life expectancy.

Insiders claimed that NHS chiefs – under pressure from Government Ministers desperate to break a deadlock – rushed through a deal for Orkambi and Symkevi, but agreed to ‘take Trikafta off the table’ when a price for the new drug could not be settled on.

But in May, talks broke down again. The sticking point was, as before, cost. 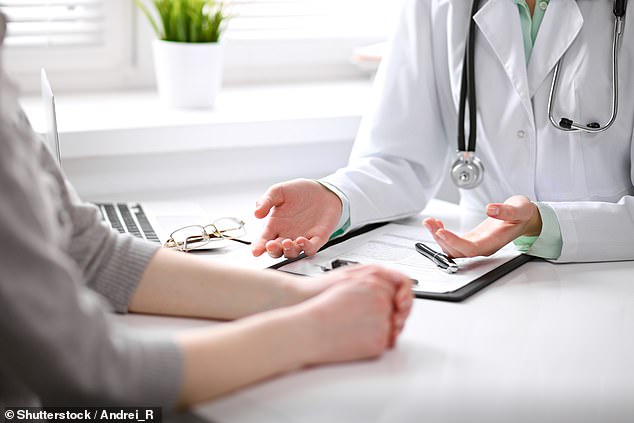 The Mail on Sunday has now learnt that, in a surprise move, the EU safety body, the European Medicines Agency (EMA), plans to approve Trikafta next month.

Some countries in Europe – including Ireland – have already made financial deals with Vertex.

It means that the moment EMA approval is announced, patients in those countries will immediately be able to get the medication.

No such contract is in place for the UK at present.

But the news about European approval will heap pressure on health chiefs here, who are now said to be scrambling to close a deal.

A source close to the talks told The Mail on Sunday: ‘It was looking shaky for a while, but the NHS and Ministers don’t want to risk a scenario where Trikafta was being given to patients in Ireland, and to other close European neighbours, but not here.’

For 29-year-old Laura Gayton, who also has cystic fibrosis, an agreement on Trikafta could not come too soon.

The former swimming instructor from Kettering, Northamptonshire, has, like Nicole, been shielding since the start of the pandemic. With her lung function deteriorating rapidly, an illness such as Covid-19 could be catastrophic.

Laura, who lives with firefighter husband Nicholas, 32, is one of the 50 per cent of cystic fibrosis patients who cannot take Orkambi or Symkevi as the drugs won’t work for her form of the disease.

Trikafta is her only hope of a normal life. 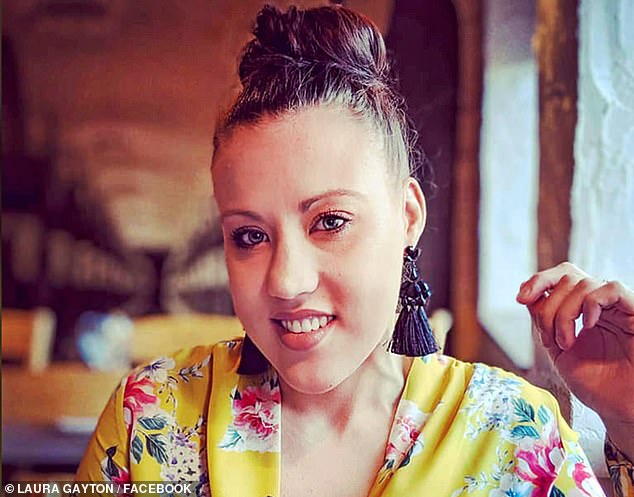 Desperate: Cystic fibrosis patient Laura Gayton, who has just 58 per cent lung function but ‘isn’t ill enough’ to be given Trikafta on compassionate grounds, as Nicole did

She says: ‘I’ve just come back home after two weeks in hospital, where I was given strong antibiotics for a chest infection.

‘I tried to hold off going in because I was so worried about leaving the house, and the coronavirus.

‘But eventually I began coughing up blood and I just had to go in.

‘Over the past few years, I’ve been in hospital more and more. The antibiotics are becoming less effective each time. I feel as if I’m running out of options. It’s really frightening.’

Her lung function is now at about 58 per cent – yet this, incredibly, means she isn’t ill enough to get Trikafta on compassionate grounds, as Nicole did.

‘They say if you want to know what a 50 per cent lung function feels like, try holding your nose and breathing through a straw,’ Laura says. ‘But it’s worse than that, because every breath hurts and I’m always exhausted.’

She says it felt ‘just horrible’ when she heard the news that Orkambi had been approved but that it couldn’t help her.

‘Mentally, it’s hard to keep going at times. It’s scary to think about the future, and I get so anxious. Am I going to die before I get to 40?

‘I’d say to all those who are in these talks, discussing how much Trikafta is worth, just imagine for a minute what it’s like for us.

‘I’ve spent half of my life in hospital. But if children today get Trikafta, then maybe they’ll be spared from all that.

‘I hope [Health Secretary] Matt Hancock and all those other people realise, when they sit in that boardroom and argue over money, that our lives are in their hands.’

What to read, watch and do 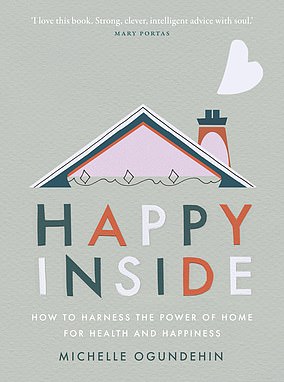 Happy Inside: How To Harness The Power Of Home For Health And Happiness, by Michelle Ogundehin

Simple tips for transforming your home into a space that fully supports your health and wellbeing, based on the principles of mindfulness meditation. £18.99, Ebury

Actor and presenter Ross Kemp, left, meets patients who have become hooked on prescription painkillers, as he investigates how treatment for chronic pain can quickly turn to addiction. Thursday, 7.30pm, ITV 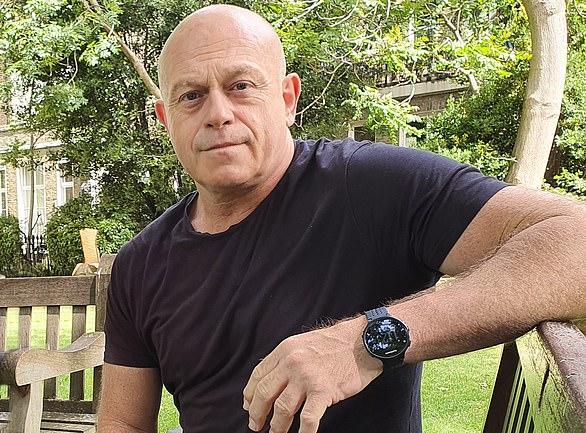 Tyrese Dibba, a deaf and partially sighted 15-year-old from Birmingham, has recorded a series of free video tutorials to tackle isolation among disabled Britons. sense.org.uk/sense-sign-school