Mind-controlled arm prostheses that can ‘feel’ 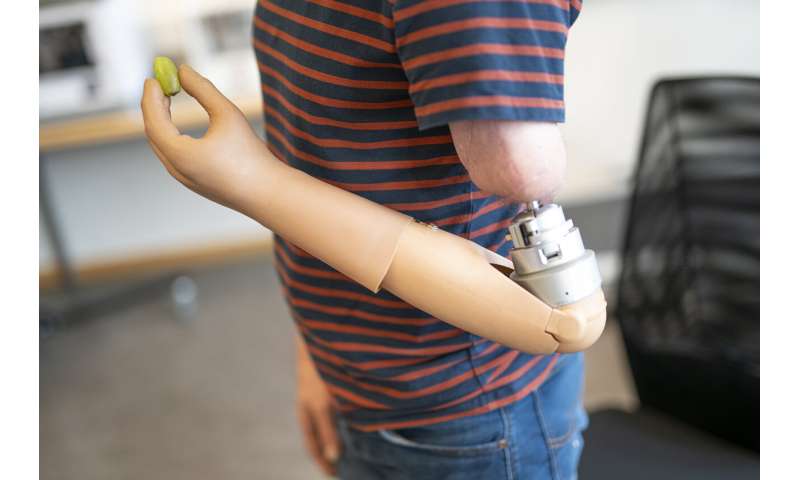 For the first time, people with arm amputations can experience sensations of touch in a mind-controlled arm prosthesis that they use in everyday life. A study in the New England Journal of Medicine reports on three Swedish patients who have lived for several years with this new technology, one of the world’s most integrated interfaces between humans and machines.

The advance is unique: The patients have used a mind-controlled prosthesis in everyday life for up to seven years. For the last few years, they have also lived with a new function—sensations of touch in the prosthetic hand. This is a new concept for artificial limbs, which are called neuromusculoskeletal prostheses, as they are connected to the user’s nerves, muscles and skeleton.

“Our study shows that a prosthetic hand attached to the bone and controlled by electrodes implanted in nerves and muscles can operate much more precisely than conventional prosthetic hands. We further improved the use of the prosthesis by integrating tactile sensory feedback that the patients use to mediate how hard to grab or squeeze an object. Over time, the ability of the patients to discern smaller changes in the intensity of sensations has improved,” says Max Ortiz Catalan. 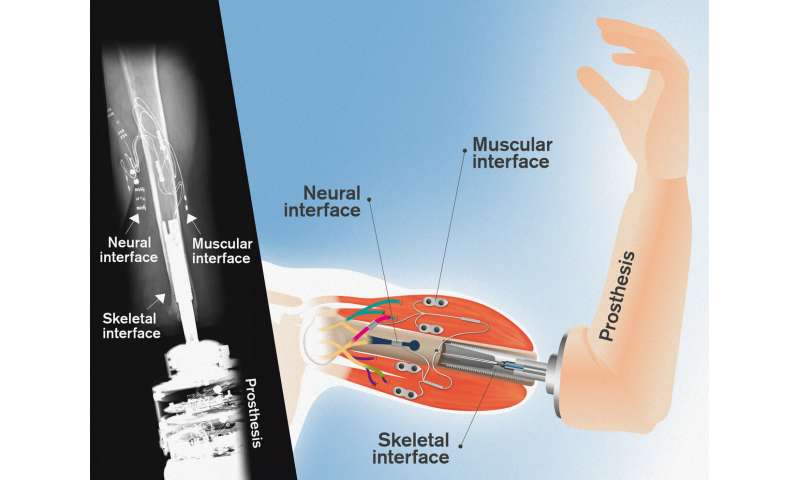 “The most important contribution of this study was to demonstrate that this new type of prosthesis is a clinically viable replacement for a lost arm. No matter how sophisticated a neural interface becomes, it can only deliver real benefit to patients if the connection between the patient and the prosthesis is safe and reliable in the long term. Our results are the product of many years of work, and now we can finally present the first bionic arm prosthesis that can be reliably controlled using implanted electrodes, while also conveying sensations to the user in everyday life,” continues Max Ortiz Catalan.

Since receiving their prostheses, the patients have used them daily in all their professional and personal activities.

The new concept of a neuromusculoskeletal prosthesis is unique in that it delivers several different features which have not been presented together in any other prosthetic technology in the world:

The newest feature of the technology, the sensation of touch, is possible through stimulation of the nerves that were once connected to the biological hand. Force sensors located in the thumb of the prosthesis measure contact and pressure applied to an object while grasping. This information is transmitted to the patients’ nerves, leading to their brains. Patients can thus feel when they are touching an object, its characteristics, and how hard they are pressing it, which is crucial for imitating a biological hand. 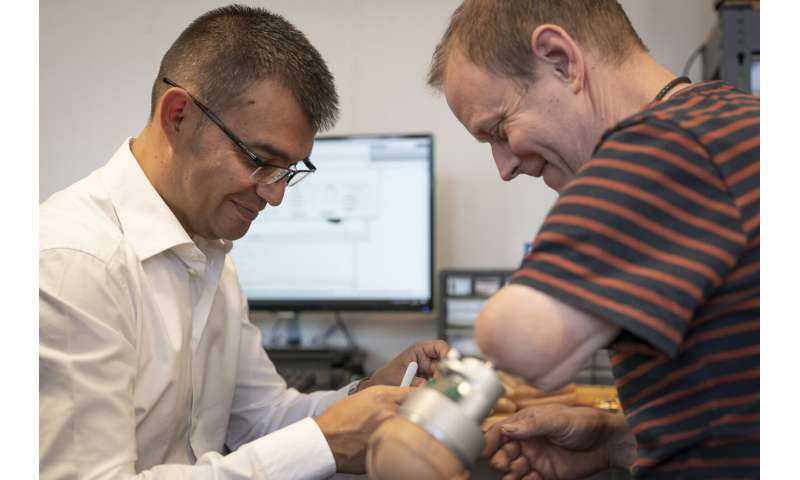 “Currently, the sensors are not the obstacle for restoring sensation,” says Max Ortiz Catalan. “The challenge is creating neural interfaces that can seamlessly transmit large amounts of artificially collected information to the nervous system, in a way that the user can experience sensations naturally and effortlessly.”

The implantation of this new technology took place at Sahlgrenska University Hospital, led by Professor Rickard Brånemark and Doctor Paolo Sassu. Over a million people worldwide suffer from limb loss, and the end goal for the research team, in collaboration with Integrum AB, is to develop a widely available product suitable for as many of these people as possible.

“Right now, patients in Sweden are participating in the clinical validation of this new prosthetic technology for arm amputation,” says Max Ortiz Catalan. “We expect this system to become available outside Sweden within a couple of years, and we are also making considerable progress with a similar technology for leg prostheses, which we plan to implant in a first patient later this year.”

More about: How the technology works:

The touch sensations arise from force sensors in the prosthetic thumb. The signals from the sensors are converted by the control system in the prosthesis into electrical signals which are sent to stimulate a nerve in the arm stump. The nerve leads to the brain, which then perceives the pressure levels against the hand.

The neuromusculoskeletal implant can connect to any commercially available arm prosthesis, allowing them to operate more effectively.

More about: How the artificial sensation is experienced: