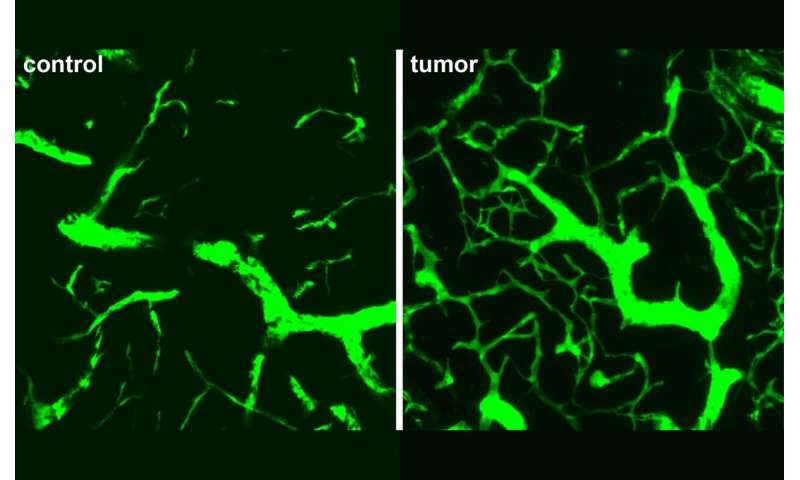 Creating new blood vessels, a process called angiogenesis, for tumors in lymph nodes is different than for tumors in other parts of the body, such as the colon or lung, a team from the Max Delbrueck Center for Molecular Medicine in the Helmholtz Association (MDC) reports in the journal Cancer Research. Scientists from the MDC labs of Dr. Armin Rehm, Dr. Uta Höpken and Professor Holger Gerhardt were involved in this project. The team identifies potentially more effective treatment targets to slow tumor growth for lymphoma patients.

“We hypothesized that tumors in lymph nodes are completely different from solid tumors because the lymph nodes provide such a supportive microenvironment for blood borne tumor cells,” said Dr. Uta Höpken, who heads MDC’s Microenvironmental Regulation in Autoimmunity and Cancer Lab. Still, it was “absolutely surprising that none of the usual suspects were involved,” said Dr. Armin Rehm, who leads MDC’s Translational Tumorimmunology Lab.

Blood vessels in early lymphoma are unusually dense and irregular, with a lot more branching than observed in blood vessels of healthy lymph nodes. The pattern of branching has not been observed in solid tumors, in infected lymph nodes or in developing organs, which are typically other sites of neo-angiogenesis.

To uncover the unique signaling pathways that drive this development, the team ran analyses using transgenic mouse models that develop lymphoma, as well as mice implanted with lymphoma cancer cells. They looked at gene expression patterns to see which genes and proteins are most active in the initial phases of tumor development.

Culprits usually implicated in tumor angiogenesis—inflammation, low oxygen levels, and signaling between the base and tip of blood vessels, called Notch signaling—did not show up in the results.

A group of proteins, called vascular endothelial growth factor (VEGF), are considered primary drivers of normal blood vessel development, as well as angiogenesis in tumors. In most solid mass tumors, VEGF-A is the protein mediating the process, in conjunction with its receptor, called VEGFR-2.

In the early stages of lymphoma, the team discovered VEGF-C is the most active protein. When they tried to block receptor VEGFR-2 to inhibit VEGF-C activity, nothing changed.

But when the researchers blocked a different receptor, VEGFR-3, blood vessel growth was significantly slowed. They also interrupted a receptor for a small protein called lymphotoxin, which is usually needed for normal lymph node development, also helped slow angiogenesis.

The team used two drugs that are already approved for clinical use in autoimmune disorders to inhibit the pathways. They confirmed the treatment also worked on human cells. While not clinicians themselves, the researchers hope the treatment can be taken up for clinical trials to investigate its effectiveness in human patients. “If a few cancer cells survive chemotherapy, it might be possible to prevent relapse by addressing these pathways with immunotherapy,” Rehm said.

Watching from the start

A key feature of this study was the timing. The researchers traced angiogenesis in the first twelve days after cancer cells invaded lymph nodes. This gave them a unique opportunity to observe the early “crosstalk” or interaction between tumor cells and the lymph node microenvironment. Only five to ten per cent of lymph node cells were cancerous, and already the lymph node was being restructured. “The changes we saw occur very early and with a very low tumor burden,” Höpken said.

Imaging these early changes in high-resolution presented a challenge that required a great deal of diligence. “Lymphoma cells are widely distributed cells within the highly compartmentalized lymph node,” said Lutz Menzel, co-first author and post doc in the Translational Tumorimmunology Lab. “Finding lymphoma-induced remodeling of the stroma, when other areas of the lymph node remained unaffected, quite often became a search for a ‘needle in the haystack’ under the microscope.”

The team underscored the importance of animals for this work. Such a study is not possible with human patients, because they are not yet showing symptoms. “Animals provide the advantage to see what is going on at the beginning of disease, rather than the end,” Rehm said. “Organoids are simply not far enough developed to mimic the interaction between many different cell types in complex lymph node tissue.”