Legalizing cannabis led to increased cannabis poisonings in Canadian children, and it could get a whole lot worse 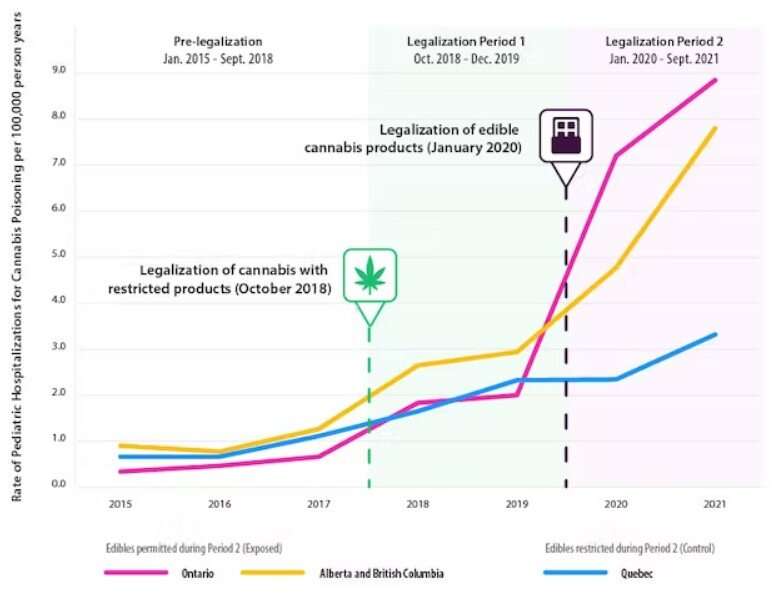 When Canada legalized non-medical cannabis four years ago, there was enormous uncertainty about how legalization could impact the health of Canadians. Since then, there has been increasing evidence that legalization has resulted in some negative health effects. The clearest of these is a large increase in accidental cannabis poisonings in young children.

We conducted two large studies that found a nine-fold increase in emergency department visits and a six-fold increase in hospitalizations for cannabis poisoning in children younger than 10 years (average age of 3.5 years) following cannabis legalization in Canada. These increases have been so substantial that cannabis is now a leading cause of hospitalizations for poisoning in this age group.

The government of Canada has just launched a mandated federal review of the health and social impacts of cannabis legalization. We argue that addressing the impacts of legalization on the health of Canadians must take precedence over the financial concerns of the cannabis industry, which are demonstrated by their growing calls to roll back or remove government regulations in the upcoming review.

Looking at the provincial variation in the ways that legalization was implemented across Canada, it’s clear that increases in cannabis poisonings in young children did not need to occur.

At the start of legalization in October 2018, the federal government only allowed the sale of dried cannabis flower. After an intentional one-year delay, new products, including cannabis edibles like candies and chocolates, were permitted.

A wide variety of these edibles went on sale everywhere in Canada except in Québec, which prohibited anything in the form of chocolates, gummies and candies based on concern over their high appeal to children.

This lack of increase in Québec strongly argues against alternative explanations, including that these hospital visits are from illegal cannabis products, caregivers becoming more comfortable disclosing that kids may have ingested cannabis or pandemic influences.

When we care for infants and young children who have been rushed to the hospital for cannabis poisoning, we see many parents and caregivers who are shocked by the severity of the cannabis effects on their intoxicated child. Children can become very sick, be less responsive and in severe cases suffer from seizures, trouble breathing on their own, or even enter a coma.

With no effective antidote, children with severe cannabis poisoning require hospitalization—sometimes in intensive care units requiring a breathing machine—until the cannabis is processed and cleared from their body. The long-term effects of these unintentional poisonings are unknown.

These increases in child poisonings occurred despite safety efforts by the federal government, which included parental education, restricting cannabis advertising, mandating plain and child-resistant packaging and restricting the amount of THC (the main psychoactive ingredient in cannabis) in a package to a maximum of 10 milligrams.

It’s important to note the cannabis industry is specifically asking that many of these regulations—including THC limits and child-resistant packaging—be removed to make their products more competitive with the illicit market.

But legalization is not shaping up to be just about replacing the illegal market. The legal market is expanding far faster than the illegal market contracts. Canadian households now spend an estimated 37.3 percent more on cannabis from all sources (medical, legal non-medical and illegal) than they did before legalization (1.44 billion in the third quarter of 2018 vs 1.93 billion in the second quarter of 2022). That means that we, as a country, are likely using increasing quantities of cannabis.

Youth cannabis use and harms

A key goal of legalization was to reduce cannabis use and related harms in youth. While the data is less definitive, there is also some reason for concern that these harms have increased.

In Ontario, emergency department visits due to cannabis-induced episodes of severe vomiting (hyperemesis) and for cannabis addiction, cannabis-induced psychosis and poisoning have also increased in young adults since legalization.

The largest increases in emergency department visits due to cannabis occurred when the legal market began carrying new high-potency products and the number of cannabis retail stores rapidly expanded. These increases overlapped with much of the COVID-19 pandemic so it is hard to disentangle whether they reflect changes from legalization, a response to COVID-19 related stressors or a combination.

Increases in cannabis harms in young children and youth do not negate the social benefits of cannabis policy reform. Criminalization of cannabis created major problems, including life-altering limits on employment, education and financial opportunities. These effects were well documented to be heavily discriminatory due to over-policing among racialized communities and Indigenous youth.

Reducing criminal justice harms is of considerable public health interest. However, we argue that it does not necessitate cannabis commercialization that includes cannabis marketing, widespread cannabis retail stores and permitting ultra-high-potency products that appeal to youth and children.

As the federal government reviews the impacts of legalization to date, we recommend protecting the health of Canadian children and youth by—at a minimum—maintaining existing regulations. This includes plain and child-resistant packaging and THC content limits on edibles. Without these, we will almost certainly see greater numbers and far more severe cannabis poisonings in children.

While we examine more evidence on the impacts of legalization on younger Canadians, we also caution against loosening current rules that limit cannabis marketing and advertising which can appeal to youth and young adults.