Girl, five, with 'childhood dementia' has forgotten how to say 'mummy'

The little girl who has forgotten how to say ‘mummy’: Heartbroken parents of five-year-old girl with ‘childhood dementia’ who won’t live past her teens say their daughter has lost her ability to talk

The heartbroken parents of a five-year-old girl who is suffering from childhood dementia say their daughter has forgotten how to say ‘mummy’.

Penny Mills, from the West Midlands, was diagnosed with Sanfilippo syndrome when she was four, and is unlikely to live beyond her teenage years.

Her rare genetic disease, which affects around one in 70,000 children, causes fatal brain damage and dementia-like symptoms.

Parents, Kelly, 40, and Andrew, 44, say she has lost her ability to talk, with her vocabulary dropping from 150 words to as few as ten within a year.

Penny can no longer do tasks she learnt as a toddler, such as using cutlery, putting on her socks or shoes, or using the toilet.

Mr and Mrs Mills will have to watch Penny deteriorate further; one day she will need to be fed through a tube because Sanfilippo causes an inability to swallow.

But the family have vowed to make ‘beautiful memories’ with Penny, who still recognises their faces at the moment. 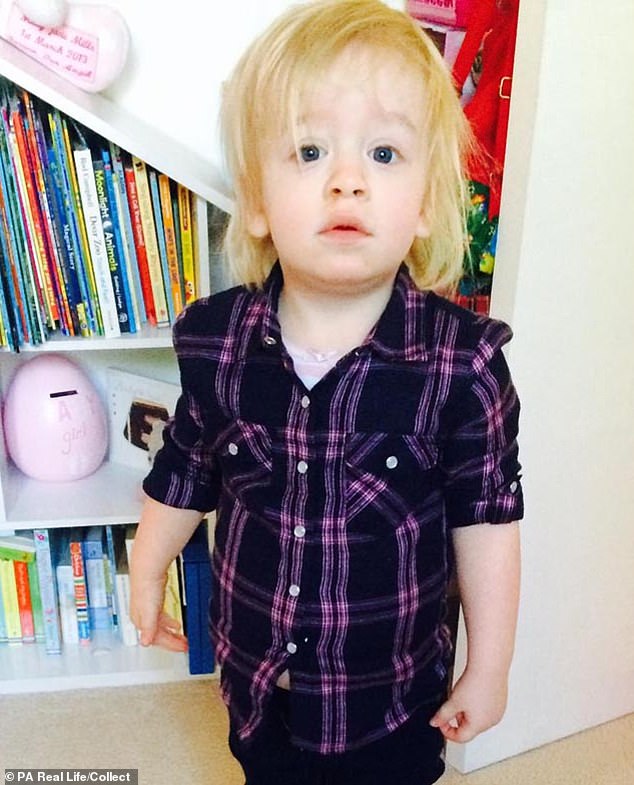 Penny Mills, 5, is suffering from rare ‘childhood dementia’ and will not live beyond her teens 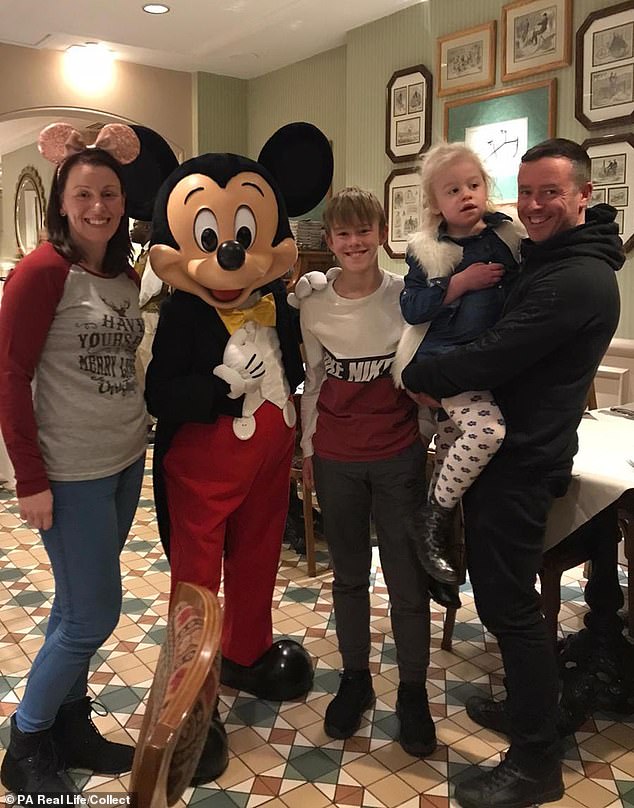 Her devoted parents, Kelly, 40, and Andrew, 44, have promised to make ‘beautiful memories’ with their daughter. Pictured above: The family at Disneyland Paris with Penny and their elder son Harry, 12 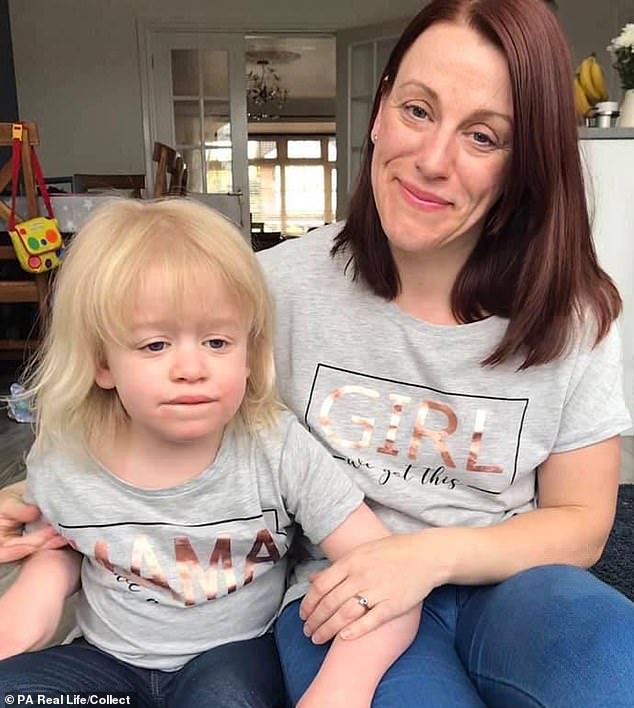 Penny, from the West Midlands, was diagnosed with Sanfilippo syndrome when she was four

Mrs Mills, also mother to Harry, 12, said: ‘She [Penny] used to say “mummy”, but I can’t remember the last time I heard her say it.

‘She still lights up when she sees us, so we don’t think she has forgotten us yet, but we are prepared for that to happen. It’s one of our worst fears.

‘It’s like we are grieving for our little girl, as we watch this cruel disease rob her of everything she knows.’

Family life was great until Penny developed a snotty nose at six months old, which numerous courses of antibiotics failed to clear. 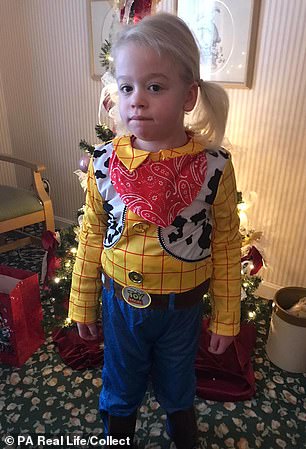 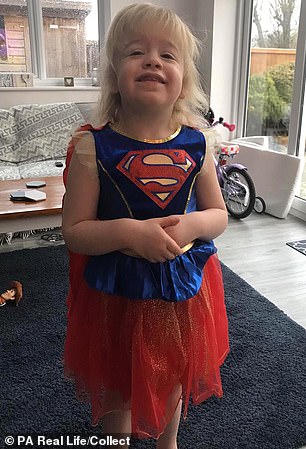 The rare genetic disease, which affects around one in 70,000 children, causes fatal brain damage and dementia-like symptoms. Penny’s birth had brought such hope because it came after Mrs Mill’s daughter Milly was stillborn 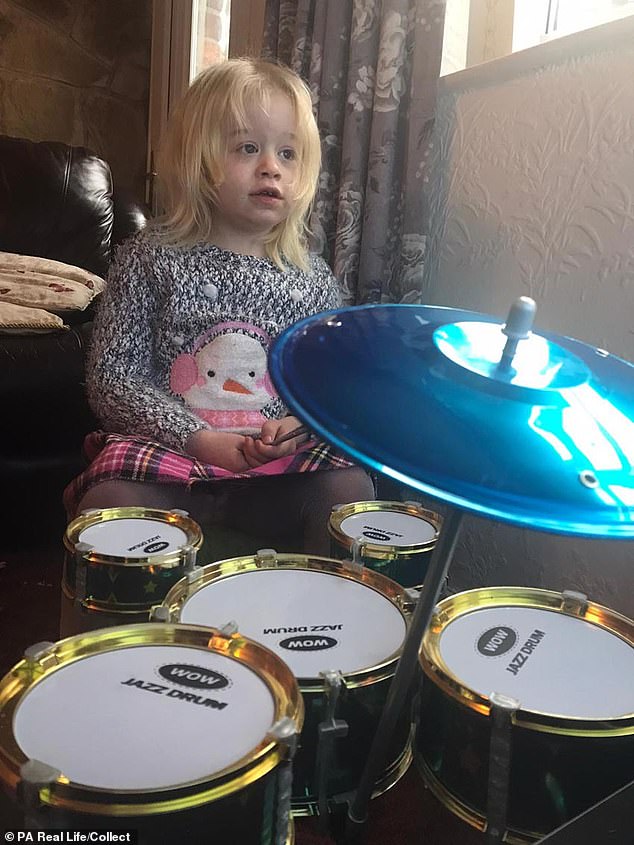 Mrs Mills has been taking evening classes in speech therapy and language to help Penny, who was dubbed a ‘rainbow baby’ because she was born following the stillbirth 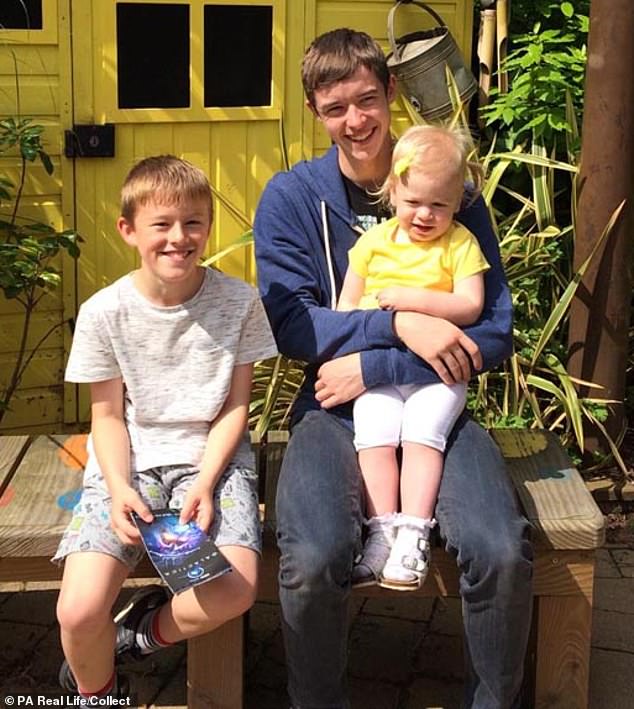 Family life – which includes Mr Mill’s son Tyler (right), 19, from a previous relationship – was great until Penny developed a snotty nose at six months old, which numerous courses of antibiotics failed to clear

WHAT IS SANFILIPPO SYNDROME?

Sanfilippo syndrome is a genetic and terminal disorder that affects around one in 70,000 live births.

Victims lack an enzyme that is essential for normal cellular function.

The condition eventually causes a buildup of a toxic material – heparin sulfate – resulting in dementia, loss of speech, blindness and eventual death.

The disease is referred to as childhood Alzheimer’s due to the effects.

Sufferers typically die before they are out of their teens.

There is no known cure, however clinical trials are being conducted in order to find one.

‘We weren’t too worried as babies do get infections at that age, but it was like a consistent green stream coming from her nose,’ Mrs Mills said.

‘As she got older, she wasn’t saying many words and was a late crawler, but we thought she was just a bit lazy, as we all fussed around her.’

She did not seem to realise when her bowels were moving and had diarrhoea, which her parents later learned was symptomatic of Sanfilippo.

‘With everything, we hoped there was a simple reason, but, deep down, Andrew and I suspected something more was going on,’ Mrs Mills said.

‘She behaved differently to other children her age. She didn’t look like me or Andrew, or the boys either. There were only a few facial similarities.’

It was after a family trip to a holiday camp in Cornwall, when Penny was two and struggled to communicate and play that she was referred to children’s services. 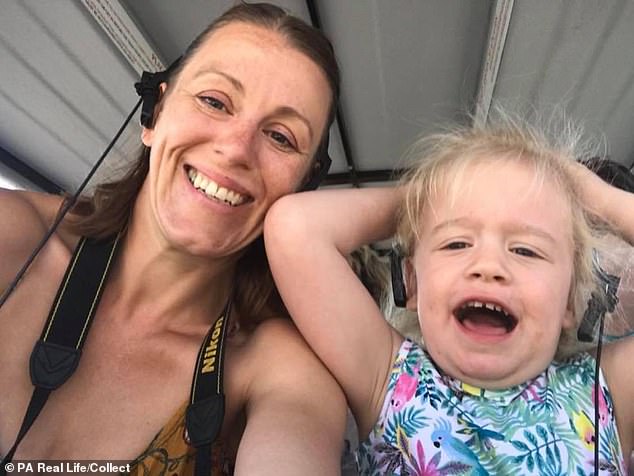 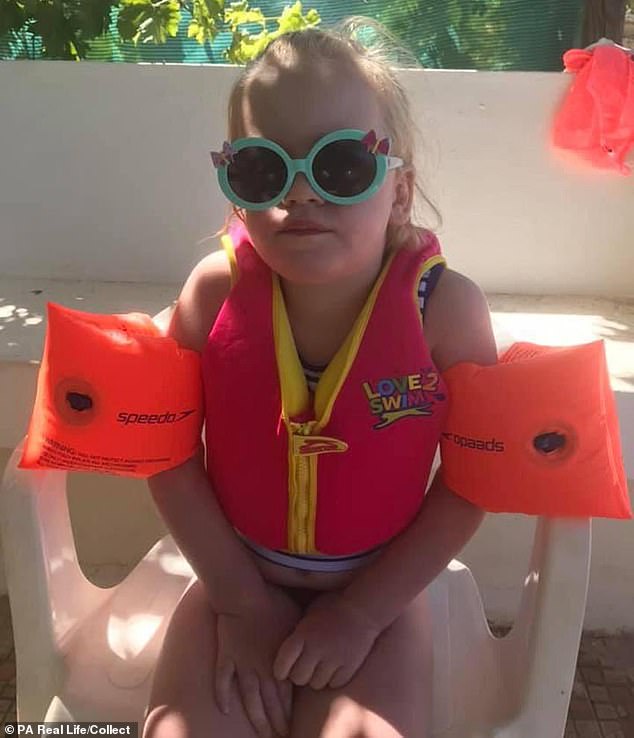 Aged two, Penny was still struggling with potty training and did not seem to realise when her bowels were moving 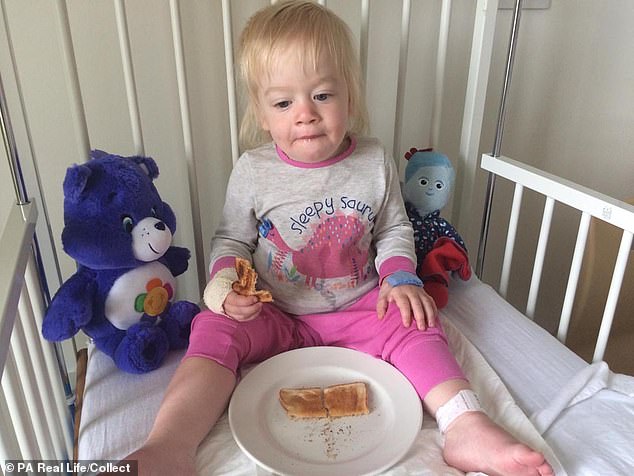 It was after a family trip to a holiday camp in Cornwall, when Penny was two and struggled to communicate and play that she was referred to children’s services 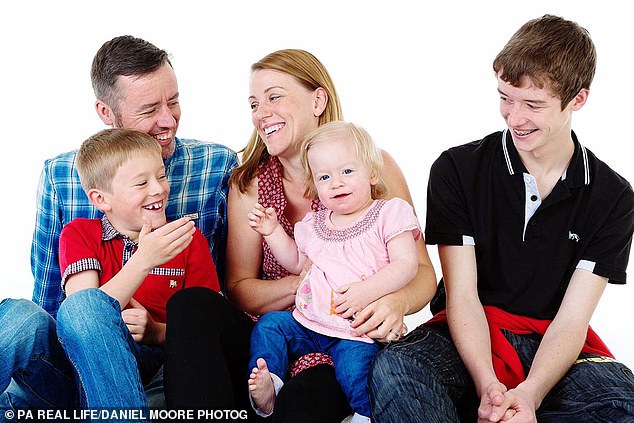 Mrs Mills explained that there are ‘three stages’ to Penny’s disease, the first of which is delayed learning. Pictured above: Mr and Mrs Mills with Penny, Harry and Tyler 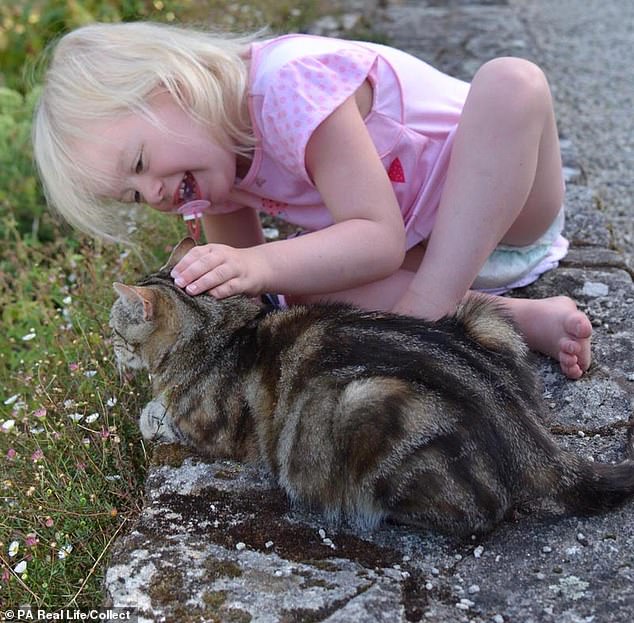 She was assessed for learning disabilities, including autism, which were ruled out.

Because her hearing was also weak, aged three, she was fitted with hearing aids which seemed to help.

But with no diagnosis, she was sent for genetic testing in September 2018 aged four. Tests found she had Sanfilippo syndrome.

‘It was a complete shock. They said it was a rare condition and gave me a leaflet about it,’ Mrs Mils said said.

‘The first thing I saw was “palliative care”. We thought it would be life-limiting, but had no idea it was terminal. We were devastated.

‘I walked Penny into school that day and broke down in tears.

‘The average life expectancy is 15, but there’s quite a big range. Some children die much younger and there are some young adults with Sanfilippo.

‘We just take each day as it comes. We’ve learned over the last five or six years that nothing’s guaranteed in life.’

Sanfilippo is a mucopolysaccharide (MPS) disease. It means her body does not have enough enzymes to controls the toxic build-up of sugar in the body. 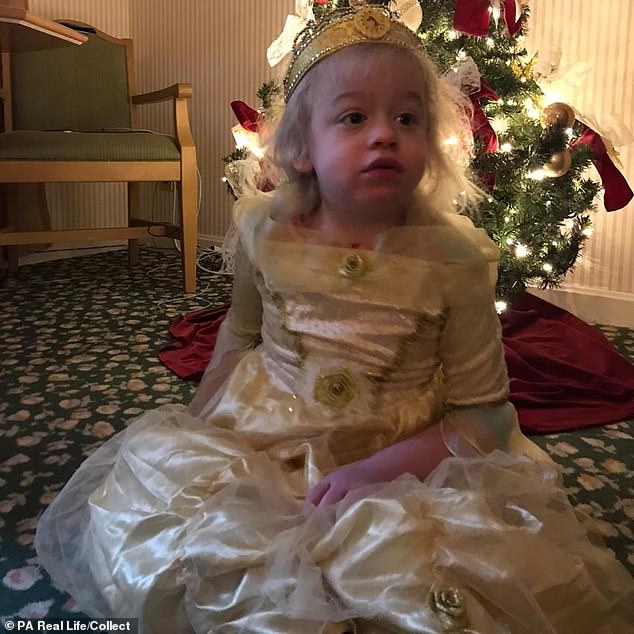 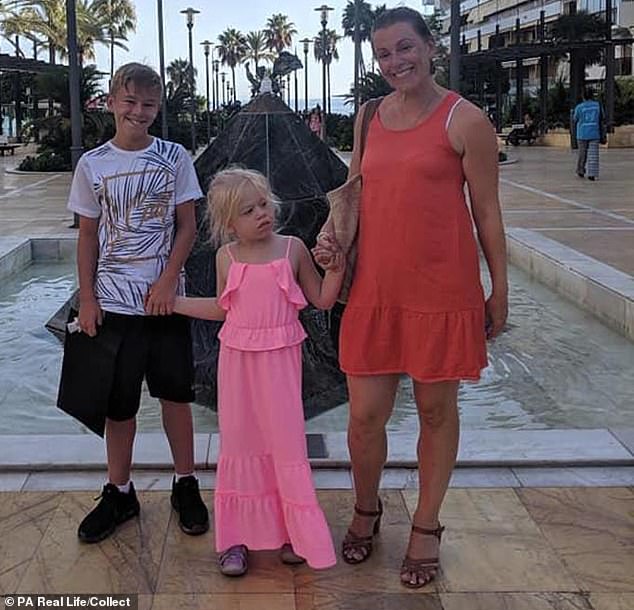 In October last year, the family noticed her vocabulary had started to go, with her forgetting words she had once known like cheese, chocolate and biscuits 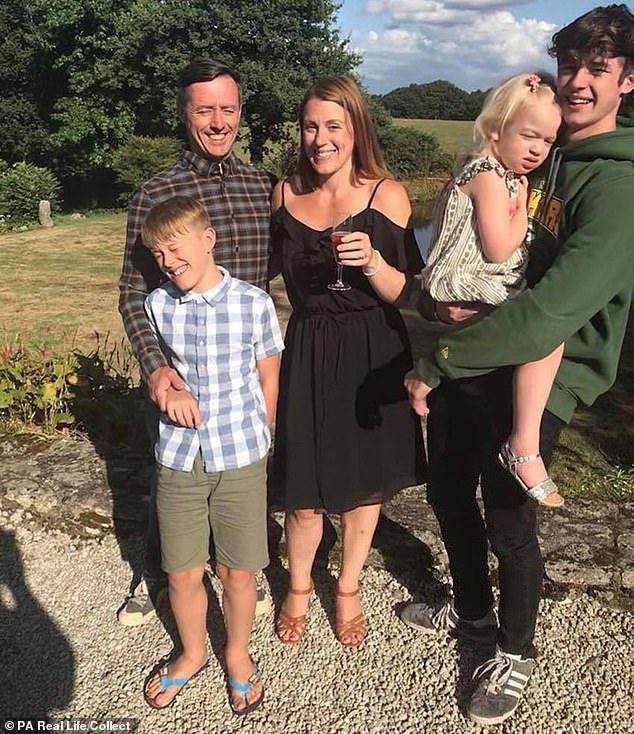 ‘The second stage, which we’re in now, is the hyperactivity stage, so she is often awake for three or four hours a night.

‘The third stage is when sufferers really start to slow down. It is different for every child, but she will start to lose mobility and will eventually forget how to swallow, so will need a feeding tube.’

The diagnosis has been particularly cruel for Mr and Mrs Mills because Penny’s birth brought such hope by coming after her sister Milly was stillborn in March 2013.

Milly died after Mrs Mills suffered a placental abruption – where the placenta separates from the uterus early.

Penny was dubbed a ‘rainbow baby’ because she was born following the stillbirth.

‘That loss was devastating for the whole family,’ Mrs Mills said.

‘Discovering I was pregnant with Penny nine months later, I felt extremely lucky. Then, finding out she was a little girl, too – we felt so grateful.

‘She was a chunky little thing and we all fell in love with her instantly.’

In October last year, the family, including Mr Mill’s son Tyler, 19, from a previous relationship, noticed Penny’s vocabulary had started to go. 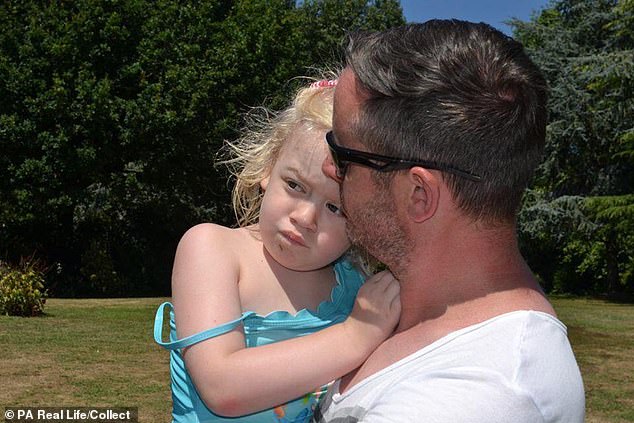 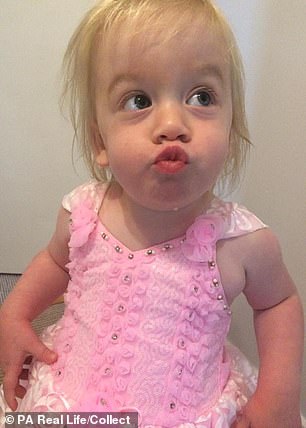 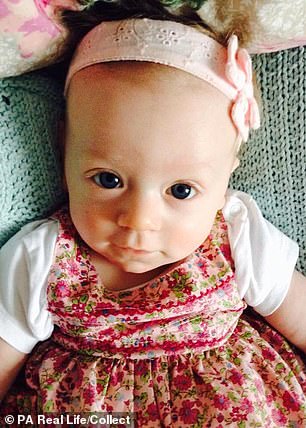 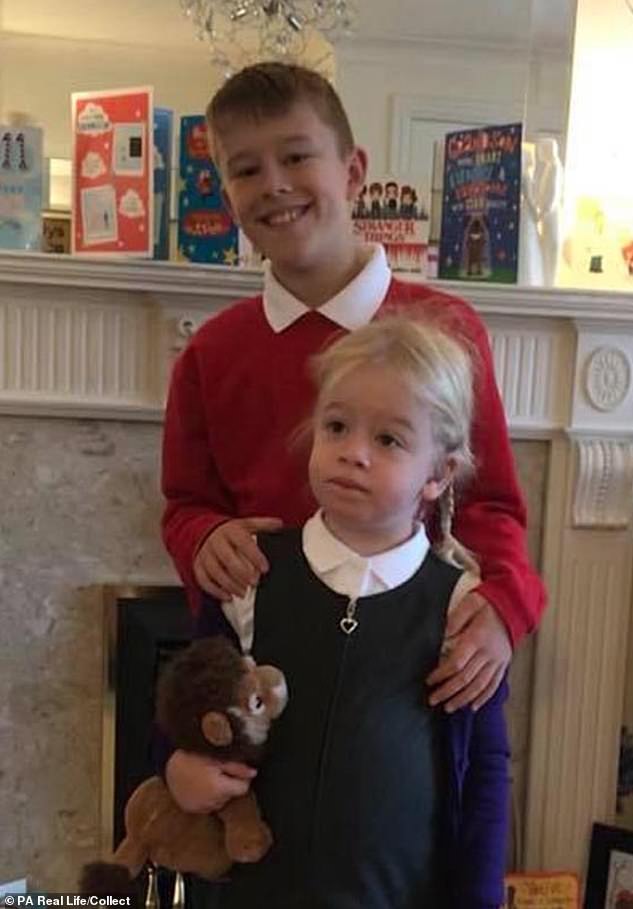 Penny’s amazing, she lights up the room with her laughter,’ Mrs Mills said. Pictured above: Penny in school uniform with Harry

She had forgotten words she had once known like cheese, chocolate and biscuits, and her brothers’ names.

Around the same time she also stopped using a fork and started eating with her hands.

Her vocabulary has now also virtually disappeared. She still says ‘dada’ and ‘dance,’ over and over, but out of context.

Mrs Mills said: ‘She has forgotten how to use toys, like a piggy bank, and puzzle games where you match things and she can’t put her socks and shoes on anymore.

‘She just looks confused. We show her how to do it over and over. Sometimes she will get it but we never know if she will be able to do it again tomorrow.

‘She doesn’t get frustrated, because she doesn’t really understand what we are trying to do.’

Luckily, she still recognises her parents, but they know this will not last. 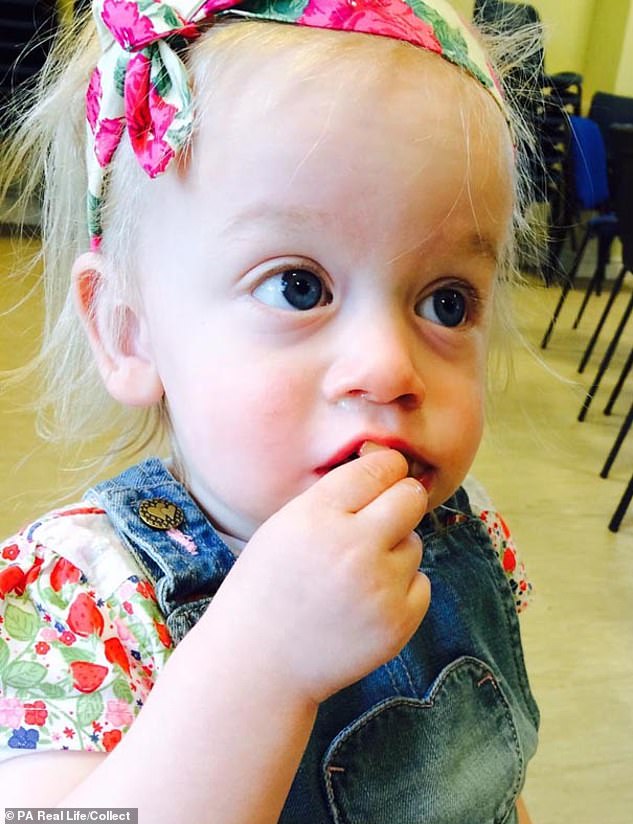 ‘When she gets to the end stage, I do not want to look back and think all I did was worry about the future. We need to embrace the now,’ Mrs Mills said 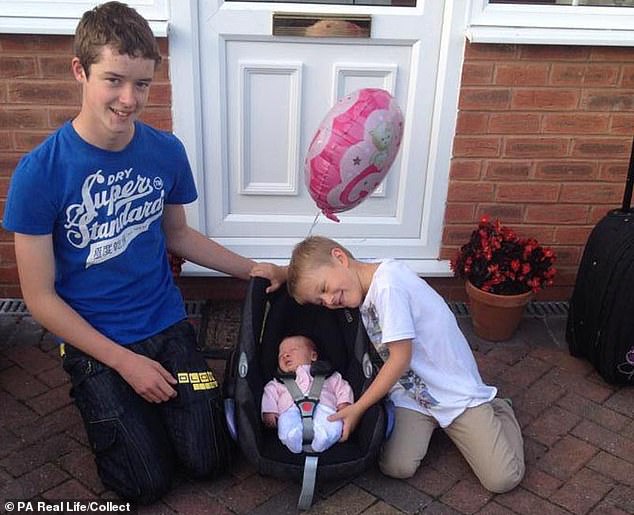 The family hope to spend as much time as they can with Penny while they are still able. Pictured: Harry and Tyler with Penny as a newborn 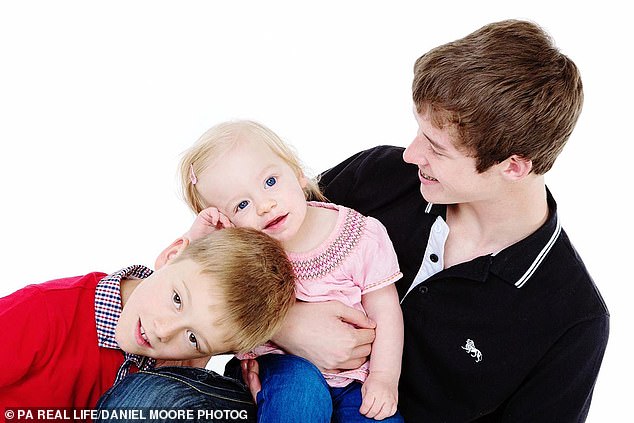 Mrs Mills said: ‘It does take her time to remember people she’s met before, so I have made her a book with pictures of the family in it. I sit down and go through it with her every day.

‘Her brother’s away at university and we Facetime him, so she remembers him.’

Penny’s family are determined to make as many memories as they can with her.

‘When she gets to the end stage, I do not want to look back and think all I did was worry about the future. We need to embrace the now,’ Mrs Mills, who has been taking evening classes in speech therapy and language to help Penny, said.

‘We went to Disneyland Paris just before Christmas and want to go to Disneyland Florida in 2021. She’s also desperate to meet Mr Tumble from CBeebies.

‘Penny’s amazing, she lights up the room with her laughter. She’s a happy little girl who loves to dance and we need to make the most of her while we can.’

A spokeswoman for the MPS Society, which reached 1,500 families in 2019, said: ‘Every eight days, a baby born in the UK is diagnosed with an Mucopolysaccharide (MPS) or a related disease, rare genetic conditions which cause progressive physical disability and, in many cases, severe degenerative neurological deterioration.

‘Our vision is for all people affected by our diseases to live the lives they want. Our mission is to transform lives through specialist knowledge, support, advocacy and research.’

To find out more visit: www.mpssociety.org.uk and to donate towards the MPS Society in honour of Penny click here.