Fascinating scans reveal how humans can survive with HALF a brain

Fascinating scans of six human patients prove it is possible to survive without one side of the brain.

All of the patients, who were in their 20s and early 30s, had one hemisphere taken out as children.

The life-changing procedure – considered a last resort when no other treatment is working – is offered to stop severe seizures, normally in epileptics.

It is known to be successful, which scientists now believe is because the remaining half of the brain rewires itself to pick up the slack.

Tests of the brains of the six patients showed some of the connections between different regions were even stronger than normal.

The patients even behaved like adults with a full brain, which the California Institute of Technology experts said was ‘remarkable’. 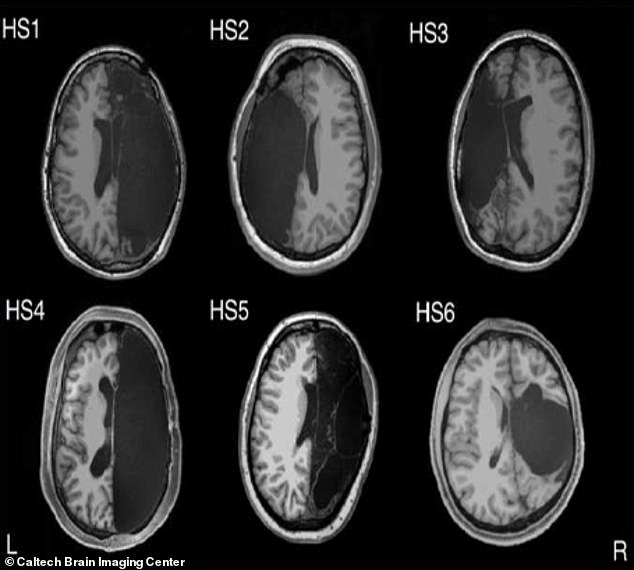 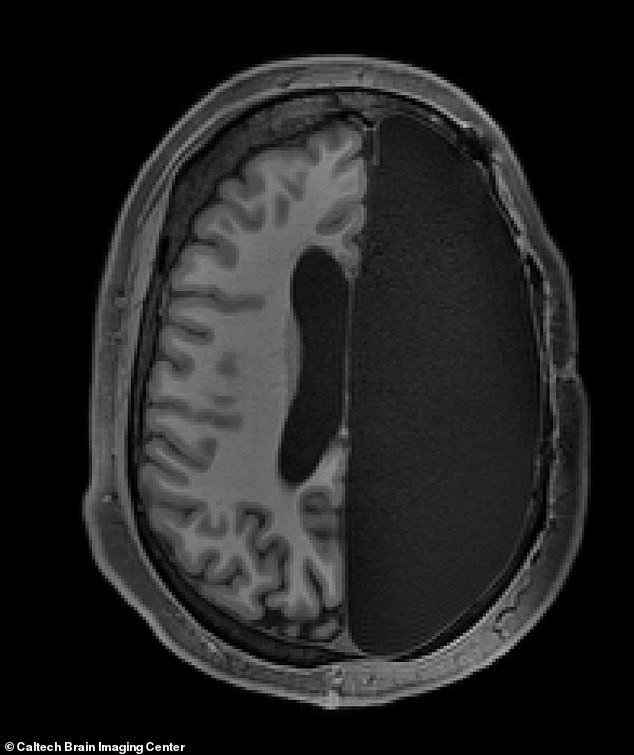 The patients behaved like other typically developed adults, which the shocked researchers found ‘remarkable’

Dorit Kliemann, a post-doctoral researcher and first author of the study, said: ‘The people with hemispherectomies that we studied were remarkably high functioning.

‘They have intact language skills; when I put them in the scanner we made small talk, just like the hundreds of other individuals I have scanned.

‘You can almost forget their condition when you meet them for the first time.

‘When I sit in front of the computer and see these MRI images showing only half a brain, I still marvel that the images are coming from the same human being who I just saw talking and walking and who has chosen to devote his or her time to research.’

WHAT IS A HEMISPHERECTOMY?

Hemispherectomy is a life-changing procedure to remove either all or part of an affected cerebral hemisphere in the brain.

It may also mean disconnecting the affected half from the unaffected side.

The technique was initially developed 85 years ago to treat brain tumours but is now used exclusively for epilepsy that is resistant to treatment.

It is suitable for children who have neurological problems such as seziures or weakness on one side of the body due to diseases including Sturge-Weber-Dimitri disease, and Rasmussen’s encephalitis.

Around 70 per cent of patients become seizure free after the surgery, according to Cleveland Clinic.

There are children who continue to have seizures even after the surgery. Some of these children have damage on both sides of the brain and the seizure activity continues on the opposite side of the brain which has not been removed.

Recovery wise, the brain is incredible resilient, especially in children.

There are consequential impairments to sensory and motor functions. For example the children’s arms or hands on the affected side may be weaker.

But even these may recover to some extent. Rehabilitation is necessary in order to help the body move again.

Although some may lose ability to speak, see or hear properly, it may be the case that these functions had been lost to disease already.

The results, published in the journal Cell Biology, showed the patients who had a hemispherectomy were still able to carry out tasks like any other person.

All of the six patients had a childhood hemispherectomy between three months and 11 years old.

The wide range of ages at which they had the surgeries allowed the researchers to home in on how the brain reorganizes itself when injured.

The extent of how well the brain can adapt is often due to the patient’s age as well as the plasticity of the brain, which would allow it to recover and remould after a trauma.

Dr Kliemann said: ‘It can help us examine how brain organization is possible in very different cases of hemispherectomy patients, which will allow us to better understand general brain mechanisms.’

The patients and six controls who had a full brain were instructed to lay down for an MRI scan while the researchers tracked spontaneous brain activity at rest.

The researchers looked at networks of brain regions known to control things like vision, movement, emotion, and cognition.

They also compared the data collected at the Caltech Brain Imaging Center against a database of about 1,500 typical brains from the Brain Genomics Superstruct Project.

The team expected to find that in those with half a brain, there would be weaker connections within particular networks.

Instead, they found surprisingly normal global connectivity – and stronger connections than controls between different networks.

‘It can compensate for dramatic loss of brain structure, and in some cases the remaining networks can support almost typical cognition.’

Ralph Adolphs, a cognitive neuroscientist at the California Institute of Technology and co-author of the study said: ‘Whenever we looked at their brain scans, we’d go, “Wow, this brain really shouldn’t be able to work”.

The study was partially funded by a nonprofit organization set up by Monika Jones and her husband, whose son had a hemispherectomy.

Shortly after Henry was born, it was discovered he had a neurological condition which forced him to endure hundreds of seizures a day.

He required several surgeries, starting when he was three months old, eventually leading to hemispherectomy when he turned three years old.

Until recently, the scientific consensus has been that hemispherectomy surgery is best performed at a very young age, before a child reaches the age of five.

However, these provide encouragement for those seeking hemispherectomies beyond that age.

CAN YOU LIVE WITH HALF A BRAIN?

Normally a person has parts of their brain missing due to disease or injury.

It may be surgically removed or disconnected to treat seizure-causing disorders, but is only a last option in a very small number of patients – normally children.

The success rate for treating the seizures is extremely high and most children have excellent long-term results following without unexpected adverse outcomes.

Cephalic disorders are stem from damage to, or abnormal development of, the budding nervous system, including the brain, which are caused by a disturbance that occurs in the womb.

Damage to the developing nervous system during fetal development is a major cause of chronic, disabling disorders and sometimes death.

The degree to which damage to the developing nervous system harms the mind and body varies enormously.

Many disabilities are mild enough that the person is able to function independently through life.

Others are not – a large population is partially disabled, functioning well below normal capacity throughout life.