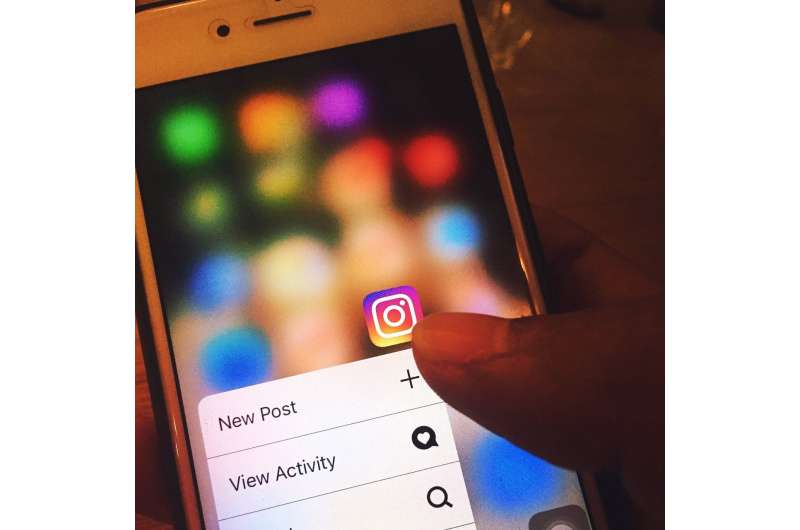 A study of more than 900 teenagers from across Australia presented at this year’s International Congress on Obesity (Melbourne Oct. 18–22) shows that when teens like, comment, or share Instagram posts featuring unhealthy food and drink brands, it can promote more positive brand attitudes and perceptions of peers who consume marketed brands. The study is by Associate Professor Helen Dixon of the Cancer Council Victoria, Australia, and colleagues.

The 913 participants aged 13–17 years (47% male, 52% female, 2% undeclared), were teenagers who use social media, recruited via national online research panels (either directly or via their parents).

Full-color digital mock-ups of fictional Instagram feeds representing each of three scenarios (conditions) were prepared by the research team: (A) control (e.g., phone brand); (B) sugary drink brand; (C) fast food brand. In all conditions, the Instagram feed featured distractor posts (that had nothing to do with food or drink marketing) such as marketing for popular teen clothing or music as well as fictional social posts from teens (e.g., photo of a teen skateboarding). Embedded in these feeds were social media marketing posts representing the respective experimental conditions.

Such posts may be “earned” or “owned” social media impressions, such as brand endorsements by celebrities or influencers, so it’s not always clear who is funding them. The teens could view the posts for as long as they liked (but usually did so for no more than a few seconds).

As teens viewed the social media feed representing their assigned condition (A, B or C), they were asked to indicate whether they would “like,” “share” or “comment” on each post. After viewing the fake social media feed, participants did a distractor task for a few minutes (online puzzle). After that, the response measures were assessed.

First the teens were asked to list any brands they recalled seeing in the social media feed (brand recall), before being presented with a list of brands and asked to indicate which of them appeared in their social media feed (brand recognition). Next, they were presented with an array of food and drink brands (with the brands marketed in conditions B and C included in the array) and asked to select which food/drink they would choose to buy for themselves.

Associate Professor Dixon explains, “The results showed that, when teens engage (like, comment, share) with unhealthy food and drink marketing posts they see on social media, it can promote more positive brand attitudes and perceptions of peers who consume marketed brands, and stronger preferences for marketed brands. On the other hand, social media marketing exposure without engagement can produce opposite effects.”

This experiment tested a very brief exposure to social media posts featuring fast food/sugary drinks, yet evidence of marketing impacts was found. Associate Professor Dixon says, “This brief marketing exposure represents a ‘drop in the ocean’ compared to the amount of unhealthy food and drink advertising teens are typically exposed to while using social media, as well as across other media and settings. It is likely that with repeated, long-term exposure to unhealthy food/drink marketing via social media, more powerful promotional effects accumulate.”

Teens who were already regular consumers of the advertised brands prior to participating in the study were found to hold much more positive attitudes towards the featured food/drink brands compared to non-regular consumers. “The brief exposure to the marketing posts in this study gave a further boost to these attitudes, among teens who engaged with the marketing posts,” explains Associate Professor Dixon.

She adds, “Social media is an important part of contemporary teenagers’ lives that is used for communication, connection, self-expression, entertainment and education. Teens should be free to use social media without being constantly exposed to marketing for unhealthy food and sugary drinks, yet the processed food industry spends millions every year targeting them with ads. Unfortunately, when Australian teens go online, they see around 100 promotions for unhealthy food every week—and our study shows that social media posts featuring fast food and sugary drink brands promote the very foods we want teens to avoid. In the case of social media, some consideration should be given to regulations that extend beyond paid advertising to paid content posts generated through celebrities and influencers, as these also promote unhealthy food and drink bands to teens.”