Do you need to avoid antibiotics in your 40s?

We’ve all taken antibiotics at some point. The miracle drugs have saved many millions of lives since the pills were developed in the 1940s. Recent concern has (rightly) been focused on their overuse – which can lead to less effectiveness or “resistance” from harmful new bacteria. But a study released this week suggests that taking antibiotics might be detrimental to the health of people in midlife. 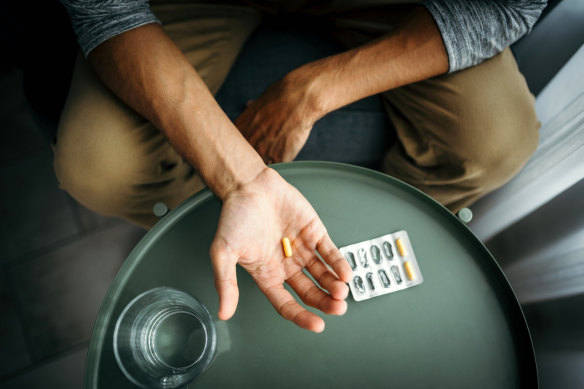 Around 160,000 Australians are estimated to have IBD.Credit:iStock

Researchers from New York University and Aalborg University in Denmark found that over-40s who have taken antibiotics are nearly 50 per cent more likely to develop inflammatory bowel disease (IBD) between one and five years later. IBD includes the illnesses Crohn’s disease and ulcerative colitis. According to the study, the more antibiotics a person took, the greater their risk.

“This is probably because the use of antibiotics will change your gut microbiome in a way that will cause an inflammatory response,” says Willem Van Schaik, director of the Institute of Microbiology and Infection at the University of Birmingham.

As chest and throat infections surge, how worried should we be about a course of amoxicillin?

If you’re over 40 and have taken antibiotics, there’s no need to panic. “It’s important to remember that antibiotics definitely won’t inevitably cause inflammatory bowel disease,” says Van Schaik.

While IBD is serious, and on the rise it’s still not that common. Around 160,000 Australians are estimated to have IBD, according to a 2021 study in PLOS One. But as Van Schaik points out, a proportion of current sufferers will be people whose disease was caused by past use of antibiotics.

We also know that antibiotics are not the only trigger. Genetics and lifestyle issues such as stress, smoking or taking ibuprofen long-term can also play a role.

If your doctor has prescribed antibiotics, however, it is important to still take them and to finish the course, to prevent bacterial resistance.

“The take-home message from our study is not to stop or avoid taking antibiotics when needed. Antibiotics can be life-saving,” says Prof Adam Faye, assistant professor of medicine and population health at NYU Langone Health, and an expert in IBD.

However, some antibiotics are riskier than others.

“Our research suggests that a narrow-spectrum antibiotic – one that targets specific bacteria – may be associated with a lower risk of developing IBD. We saw that nitrofurantoin, an antibiotic commonly used to treat urinary tract infections, and which has minimal impact on the intestinal microbiome, did not appear to increase the risk of IBD.”

The class of antibiotics with the highest risk were nitroimidazoles, of which the most commonly prescribed is metronidazole.

Could probiotics make a difference?

“There is not enough evidence to show how they might help in people at risk of developing the disease or even for those who have already been diagnosed,” says Sarah Sleet, chief executive of the Crohn’s & Colitis UK charity. However, Dr Elisa Marroquín, assistant professor at Texas Christian University, last year co-authored a study showing that taking probiotics – which usually come in capsules – could prevent or lessen some antibiotic-induced changes to the gut microbiome.

Probiotics can also help protect species diversity and even restore the populations of some friendly bacteria such as Faecalibacterium prausnitzii, which reduces inflammation and promotes a healthy intestinal barrier.

Marroquin says: “Probiotics should be consumed alongside antibiotics to prevent or decrease side effects such as antibiotic-induced diarrhoea.” Taking them simultaneously, she says, “also seems to decrease the risk of developing antibiotic-resistant bacteria in our gut”.

Other experts recommend eating a specific diet to reduce the risk of IBD.

Professor Tim Spector, co-founder of Zoe, a nutrition app, and an expert on the microbiome is an advocate of fermented, colourful and fibre-rich foods that feed our gut bacteria, known as prebiotics.

“It’s a good idea to eat fermented foods daily and make sure we eat diverse plant fibres to support our gut microbiome during antibiotic treatment,” he says. Food for thought.

This article first appeared in the Telegraph, London