Could there be an even more effective vaccine? This professor thinks so. 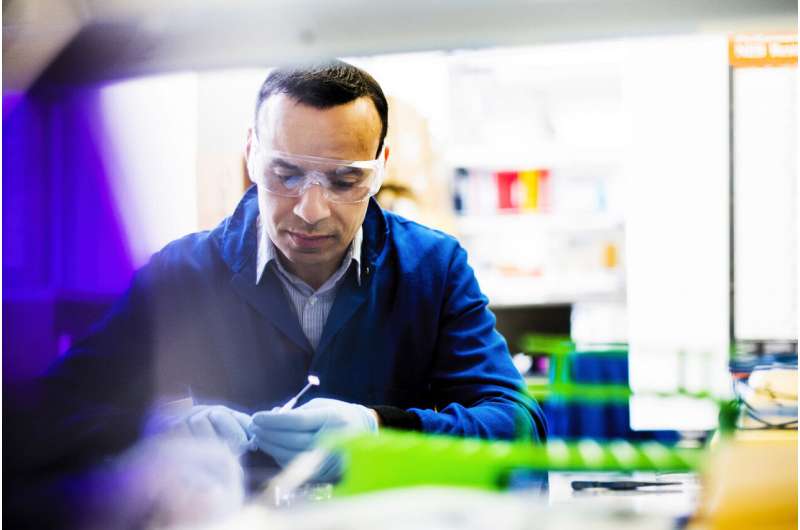 The COVID-19 vaccines currently authorized by the Federal Drug Administration have proved to be far more effective than the wildest dreams of public health officials early in the pandemic. But Sidi Bencherif thinks we could do even better. And the assistant professor of chemical engineering at Northeastern has the data to back it up.

Like many other scientists, Bencherif wasn’t studying infectious diseases until the COVID-19 pandemic began sweeping through the world in 2020. His research largely focused on improving therapeutic vaccines for different types of cancer. But when COVID-19 hit the United States, Bencherif and his team wanted to use their vaccine know-how to contribute to the fight against the infectious disease.

Bencherif and his team came up with a vaccine within days of embarking on the project that seemed effective in their lab experiments. The next step was to test it in mice. After injecting the vaccine into the rodents, Bencherif and his team drew blood samples from the mice to determine how many antibodies had been produced and tested them against a fake virus to see how they would perform.

“The data we got was actually better than what was anticipated,” Bencherif says. Three weeks after just one dose, he says, the vaccine produced the same amount of antibodies that a mRNA vaccine produced with two shots in 8 weeks.

So he reached out to Anthony Griffiths at Boston University to collaborate on testing the vaccine against live virus. Again, the vaccine that Bencherif had developed performed beyond his expectations.

Bencherif specializes in using biomaterials to improve the delivery of a vaccine. In this case, the vaccine uses a kind of sponge to recruit and train immune cells to be able to fight SARS-CoV-2, the coronavirus that causes COVID-19.

Injected along with that biomaterial in Bencherif’s vaccine is oxygen. And that addition could be key in making the vaccine more effective, he says. In fact, adding oxygen more than doubled the amount of antibodies against the virus produced by the vaccine.

In his work with cancer treatment vaccines, Bencherif observed how vaccination could create an oxygen-depleted environment—a state that’s known as “hypoxia” in medical terminology—which then reduced the immune response generated by that vaccination. “So this way,” he says, “We can actually prevent this hypoxic environment and then when the immune cells are recruited, they can actually function the way they’re supposed to.”

Bencherif’s research to uncover this teamwork between biomaterials and oxygen to boost COVID-19 vaccines was published in the journal Advanced Science. The team included postdoctoral research associates Thibault Colombani and Loek Eggermont, and graduate student Zachary Rogers. Bencherif has also been awarded a grant from the National Institutes of Health to study further how this partnership of biomaterials and oxygen might improve various vaccines and cancer treatments.