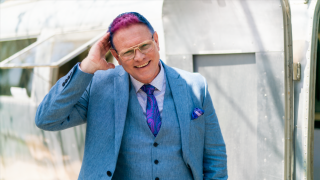 If Christian Brickman wasn’t overseeing one of beauty’s biggest retail businesses, he’d probably be running a microbrewery. “I’ve always been into beer and love the craft nature of the business,” said Brickman, the chief executive officer of Sally Beauty whose favorite is Revolver Blood and Honey from a local Texas brewery.

But lucky for Sally, Brickman’s path brought him to the Denton, Texas-based retailer almost seven years ago where he’s modernized and energized the company.

That’s not an easy task for the mammoth portfolio encompassing more than 5,000 stores—about 3,700 retail doors under the Sally name and 1,300 units for salon professionals under Beauty Systems Group (branded as CosmoProf or Armstrong McCall stores).

Brickman, whose previous experience included McKinsey & Co. and Kimberly-Clark, has served on Sally’s Beauty’s board since 2012 and joined the company in 2014 as president and chief operating officer. He was elevated to CEO in 2015 overseeing the $4 billion business that spans 12 countries.

One of his biggest challenges was sprucing up a company that wasn’t digitally savvy and burdened with outdated technology. Brickman, who is known to vividly dye his hair to reflect Sally’s prowess in hair color, brewed up a roadmap that included bumping up online sales [at the peak of the pandemic online sales soared over 200 percent and now stand at 8 percent of corporate sales], refreshing physical stores and bringing in emerging brands.

The Cape Makes A Return On The Runway

The strategy appears to be paying off: Sally Beauty’s same store sales increased 6.5 percent in the most recent quarter, ended March 31, 2021, and net earnings trebled.

Recently, Sally Beauty rolled out a campaign called, YOU by Sally, to help remove the stigma associated with professionals and executives showing off their individual styles with unconventional hair hues.

Here Brickman discusses the impact of the salon and retail shutdown, his five-year plan and his favorite fun hair color.

What did you learn during the COVID-19 pandemic and how did you adapt to store and salon closures?

Christian Brickman: It became clear that we were going to end up closing most of our stores in early March. The first thing we did was accelerate some of our digital initiatives that were already in the works.

We had all stores closed globally by March 26 of last year. Ninety percent were opened back up by June 30. It has been a rollercoaster with international markets opening and closing, salons closing and certain states putting in new restrictions.

The one thing we’ve constantly seen is this incredible demand for hair color. When we were closed, we were besieged with orders online and we saw enormous growth, including pro color for home use.

When stores reopened, we saw a rush back to stores. It was the same on our professional side, where business has also rebounded quite quickly.

What are the current trends in both the retail and professional businesses?

CB: There are three big ones: one is DIY, which shows up at Sally in hair color and nails. The second is vivid colors driven by self-expression. Sales of our bold colors were up 53 percent between January and March of 2021, such as blues, pinks, yellow, purples and greens.

We made a big investment to increase our assortment and we have four times the variety than any other retailer, with over 1,200 shades.

What’s driving business on the Beauty Systems Group side is the shift to the independent stylists. When so many salons were closed or opened on reduced capacity, a lot of stylists got displaced and became independents working mobile, in suites or booth rentals—wherever they could work. Stylists showed their resilience. When salons were closed in California, we were still selling a good portion of our normal volume so there were a lot of kitchen table, garage and backyard colorings. We tend to have greater concentration of independent stylists so as the salon business fragments, we typically gain more customers.

Speaking of hair color, especially bold shades, what was the thought process behind YOU By Sally which generated quite a buzz and was one of the first in-person launch events post pandemic?

CB: We’re all about self-expression. That’s been a big part of our ethos. We happened to see this TikTok video from Heather Chelan [a creator and musician who posted a song “Having Colored Hair Doesn’t Make You Unprofessional” which generated almost eight million views on TikTok]. We loved it and we engaged with Heather to create longer and other versions of the song. Then we engaged influencers of all age groups—Baddiewinkle who is 92, dancer Marquese Scott and some of our own influencers like Charity Grace.

When the team was shooting the video, they asked if I would do a cameo and I joined in with Ion tanzanite blue and radiant orchid hair. At the press event I had my favorite hair color — jade that matched my Versace tie.

Discuss the heavy lifting to bring Sally up to speed both digitally and in physical stores.

CB: We were way behind. We had to play catchup and now I feel we are leapfrogging ahead of the industry.

The last three years we’ve spent building a digital footprint to support the stores—we redid all the platforms and added order management systems to identify store inventory. We optimized BOPIS [buy online, pick up in-store] orders to be ready for pickup within two hours and we are rolling out three-hour same day delivery this summer.

We’re consolidating some of our stores and we’re investing to make them shoppable and more engaging. We’ve been refreshing with a new concept with lower gondolas now in more than 300 stores. Hair color was moved to the front of the store because it is more than 30 percent of sales in Sally and 40 percent in professional. Care is next in the 20 percent range and nails is quite big. Cosmetics is only five percent to six percent, and we consider that a “toss in” add to the basket.

With hair color so strong we’ve added more than 60 new shades from brands like Arctic Fox, Iroiro, Color Lux, Wella ColorCharm Paints and Good Dye Young. In the care area we’ve added clean beauty and bonding—bonding is very hot. Olaplex is the hottest brand on the pro side.

Many of your new lines are from independent brands, including Black-owned textured hair lines. How can emerging brands get a shot at Sally?

CB: We have Cultivate, an accelerator program that empowers female entrepreneurs and provides them with the tools needed to grow their business. People apply for the program and if they are one of the winning brands, they go through a training program and we teach them fundamentals including finding access to financing. We bring them in, often starting on e-commerce and then a set of regional stores. We have about 50 Black-founded brands and a lot of women entrepreneurs. There are many textured hair brands that started from kitchens or garages and now have thriving brands.

CB: The one-year plan is to complete the rollout of the updated digital platforms that were literally operating on home-grown software from the 1980s. Once that’s done, we want to continue to establish ourselves as color experts for home use. Longer term, we’re looking at ways to bring our two businesses together [Sally Beauty and Beauty Systems Group] to create an incubator lab where people can learn from professionals.

We’re also going after Millennials. We have a barbell effect with Boomers who want gray coverage on one side, which is the number-one reason people buy color. And we have Gen Z with the vivid colors. Where we have to rebuild is Millennials, who came of age with smartphones—and we weren’t there at that time. We’re trying to build a base with that group so they think of Sally as the place for hair color.

CB: Collaborative. I’m not an authoritarian leader, but I do have high expectations. I always encourage people to take risks and always come to be with big ideas—and not the 96 reasons something won’t work.

I wrote a book called “The Brilliance in Failure: A Leader’s Learning Journey,” where I say you are going to fail. Leadership isn’t about being perfect. Success isn’t about failing, but about if you are still growing.