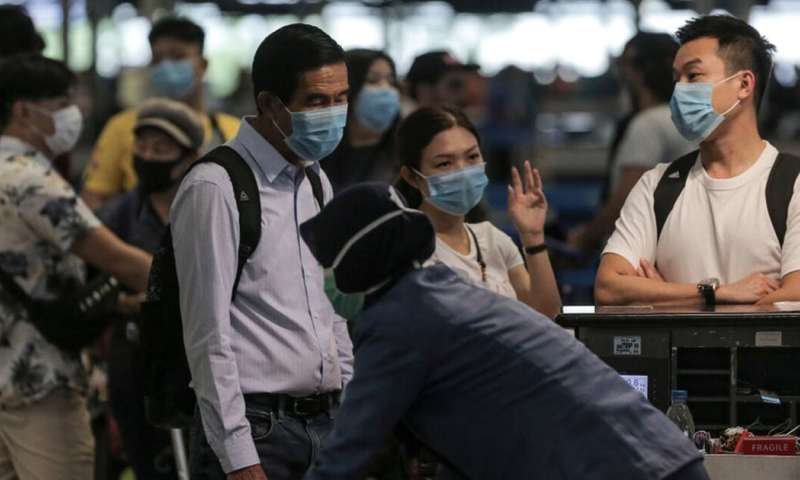 The overwhelming sharing of fake news amid coronavirus outbreak across the globe raised concerns among governments, including in the Southeast Asian region.

In the past weeks, we have quickly found disinformation and misinformation on social media stirring public discussion and, at times, leading to unnecessary panic.

In Malaysia, misinformation claiming that coronavirus would make people behave like zombies raised concerns among medical professionals after a video went viral on Facebook.

In Indonesia, dozens of hoaxes shared on the internet include inaccurate allegations that some patients in the country had died after being affected by the pathogen.

The new strain of coronavirus, originated from Wuhan, China, spread rapidly across the world, thanks to globalization.

In less than two months since the first case reported in Wuhan, the virus claimed the lives of over 700 people with more than 34,000 confirmed cases.

However, we know little about the novel coronavirus except that it is lethal if not treated properly.

This uncertainty is causing speculation among the public. It is worsened by the irresponsible sharing of unverified information about the disease.

In Indonesia, its Communication and Information Ministry announced that it had found 54 false information about the virus on the Indonesian websites and social media earlier this month.

The Indonesian government has worked closely with fact-checking bodies, including the anti-slander society (MAFINDO), to combat this misinformation.

Having no fact-checking bodies, Malaysian authorities are working together with the media to provide reliable information to the general public.

Government bodies, like Malaysian Media and Communication Council through its website Sebenarnya.my, serve as a one-stop center to crosscheck information that went viral on social media.

While in the Philippines, the country’s Department of Justice recently tasked its National Bureau of Investigation (NBI) to catch peddlers of medical hoaxes.

The severity of information disorder related to the novel virus pushed Southeast Asian government to use stringent body of laws as the distribution of misinformation have caused mass panic. 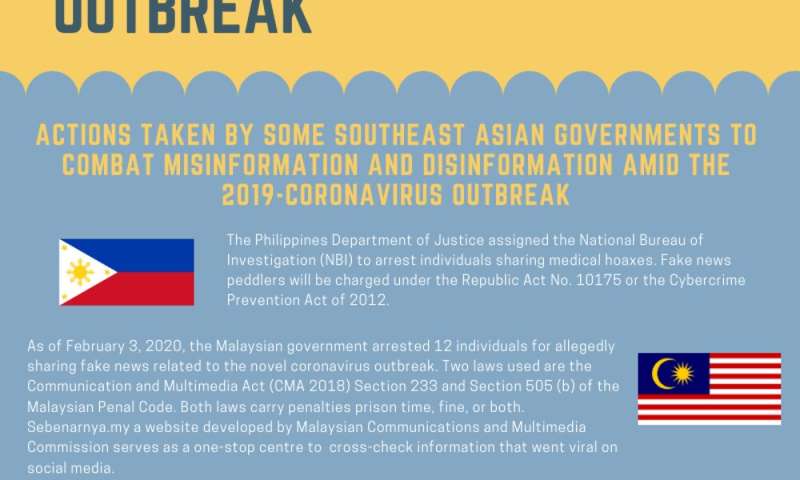 In Malaysia, for example, the call for a total ban of Chinese tourists emerged fueled by medical hoaxes consumed through social media.

A similar trend was also found in Indonesia, where anti-Chinese rhetoric exists. Xenophobic treatments against individuals of Chinese descent also happen beyond Southeast Asia amid the outbreak.

In taking serious action against the distribution of hoaxes on the pathogen outbreak, Southeast Asian law enforcers have arrested individuals for allegedly spreading false information on coronavirus.

Malaysian law enforcers have arrested 12 individuals for spreading fake news on coronavirus. If found guilty, they can face up to two years in prison or fine up to RM 50,000 (about US$12,000) or both.

Thai authorities have detained two individuals under the Computer Crime Act. While, Indonesian officials had arrested two women in Balikpapan, East Kalimantan for the same reason.

False content ranging from wrong information on vaccines to inaccurate content about the coronavirus demands a proper action plan to be instituted to keep information disorder from worsening.

Although people have associated imposing penalties for spreading fake news with limiting freedom of speech, in medical crises such as this, strict control by authoritative bodies to contain hoaxes are necessary.

Weak control over false content could lead to public panic, and jeopardize efforts placed by the government to control further spread of the virus.

Even despite harsh actions from the governments, misinformation and disinformation could still be easily found in the Southeast Asian internet sphere.

Social media have undeniably made sharing medical hoaxes easy, worsened by the public’s lack of awareness about the novel virus.

Adding fuel to the fake news fire in Southeast Asia, click-bait headlines by irresponsible media agencies further amplify the spread of misinformation on the new virus outbreak. On social media, people share information without crosschecking their facts and, at times, coupled with xenophobic remarks aimed at China.

Although Southeast Asian governments take various approaches, efforts will go to waste if the public refuse to play their part in containing the further spread of misinformation and disinformation in the public domain.

I would urge the people to always fact check information obtained, particularly ones shared on social media.

The simplest way to crosscheck is to use Google search on the matter and triangulate information from multiple sources.