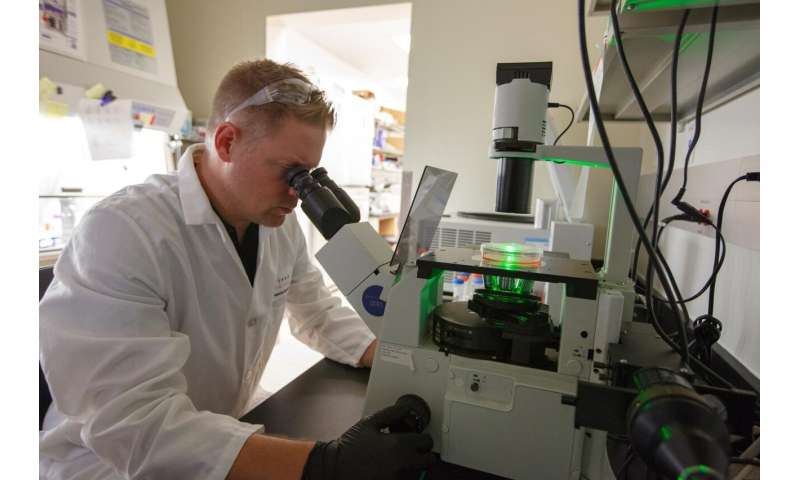 Sooner or later, most cancer patients develop resistance to the very chemotherapy drugs designed to kill their cancer, forcing oncologists to seek alternatives. Even more problematic, once a patient’s tumor is resistant to one type of chemotherapy, it is much more likely to be resistant to other chemotherapies as well, a conundrum long known as multidrug resistance. Once patients reach this point, the prognosis is often poor, and for the last 35 years scientists have attempted to understand and block multidrug resistance in cancer by using experimental medicines.

A new study from scientists at Scripps Research in Florida raises red flags about this strategy. Inhibiting the key gene involved in cancer drug resistance has unintended side effects on specialized immune system cells called CD8+ cytotoxic T lymphocytes (CTLs), the team found. This could dull anti-cancer immune responses, and potentially increase vulnerability to infection, since CTLs are “killer” T cells, essential in the fight against both viral and bacterial infections and tumors, says lead author Mark Sundrud, Ph.D., associate professor of Immunology and Microbiology at Scripps Research.

Several genes are now recognized for contributing to multidrug resistance in cancer, but the first and most prominent of these is called multidrug resistance-1 (MDR1). Its discovery more than three decades ago set off a race to develop drugs that would inhibit expression of MDR1. But those MDR1 inhibitor drugs have consistently disappointed in clinical trials. The reasons behind these failures have remained enigmatic.

In a new study published Thursday in the Journal of Experimental Medicine, Sundrud and colleagues including Scripps Research immunologist Matthew Pipkin, Ph.D., suggest that the repeated failure of MDR1 inhibitors in human cancer trials may be due to a previously unrecognized—and essential—function of the MDR1 gene in CD8+ cytotoxic T lymphocytes.

Using new genetic approaches to visualize and functionally assess MDR1 expression in mouse cells, the team found that CTLs were unique in their constant and high-level expression of MDR1. In addition, preventing MDR1 expression in CTLs, or blocking its function using inhibitors previously tested in human cancer trials, sets off a chain reaction of CTL dysfunction, ultimately disabling these cells from fighting off viral or bacterial infections.

Considering that these cells are also necessary for warding off most cancerous tumors, blocking MDR1 with existing inhibitors could also cripple natural immune responses to cancers, Sundrud says.

“With the help of our collaborators at New York University Medical Center, we looked at mouse immune cells from five major lymphoid and nonlymphoid tissues: bone marrow, thymus, spleen, lung, and small intestine,” Sundrud says. “It became clear that the types of cells that are key to fighting infections and cancers, are among those most sensitive to blocking MDR1 function.”

It has been known for decades that CTLs, as well as “natural killer” cells, a type of white blood cell, express high levels of the MDR1 gene. But because MDR1 has historically been viewed only through the lens of creating multidrug resistance in cancer cells, few researchers thought to ask what MDR1 does during normal immune responses; those that did found confusing and often contradictory results, Sundrud says, likely due to the use of non-specific animal model systems.

Convinced that MDR1 might impact natural immune responses, Sundrud and colleagues sought to devise more specific mouse models to directly visualize and functionally characterize MDR1 expression in vivo. Additional experiments revealed that blocking MDR1 function hampered the earliest stages of the CTL response to infections, when these cells multiply rapidly to reach the numbers needed to kill all viral and bacterial invaders. In line with this result, MDR1 inhibition also affected long-lived immunity to infections that have been previously seen and eradicated. It also affected the cells’ energy organelles, called mitochondria.

“We think that MDR1 plays a special role in helping mitochondria provide energy to growing cells” Sundrud says. “So, if you take this away, it makes sense that these cells can’t support the metabolic demand of cell division, and that they ultimately die.”

On one hand, Sundrud says, the research raises questions about the safety and utility of using systemic MDR1 inhibitors as cancer therapies. At the same time, the work reveals important new mechanisms that determine how the immune system fights off infections and develops long-lived memory.

“These insights become all the more pertinent today, given all the questions and concerns related to immunity against the pandemic coronavirus that causes COVID-19,” Sundrud says.

The team is now looking to use this new knowledge to finally nail down a unifying function of MDR1 in all cells, whether it is in CTLs responding to infections, or cancer cells trying to deal with chemotherapeutic agents.

In the shorter term, Sundrud and colleagues plan to explore new approaches to re-design existing MDR1 inhibitors to specifically target only cancer cells.