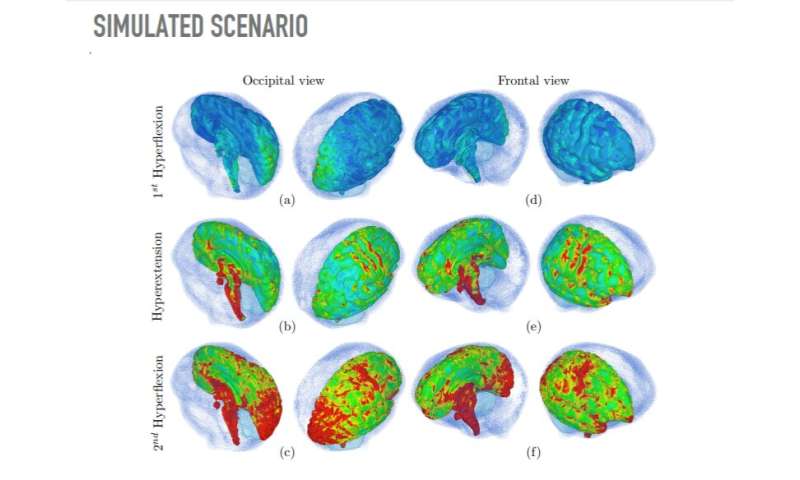 Abusive head trauma (AHT), like that of Shaken Baby Syndrome, is the leading cause of fatal brain injuries in children under two. While children can suffer permanent neurological damage, developmental delay, and disability, the long-term effects of AHT are difficult to diagnose and predict. Now, researchers at New York Institute of Technology have developed computational simulations to help clinicians and caregivers better understand the impact of these injuries.

Similar to whiplash, shaking produces an accelerated force that causes a baby’s head to undergo multiple cycles of hyperextension and hyperflexion—snapping backward and rebounding to its original position. During head injury, the cerebrospinal fluid (CSF), found in the central cavities and space surrounding the brain and spinal cord, cushions the brain and protects it from hitting the skull. Despite this protection, one in four shaken babies dies and 80 percent of survivors suffer permanent brain damage.

Computational simulations can help physicians visualize the true impact of AHT and assist them in making a prognosis. However, existing simulations are insufficient, as they portray the fluid as an elastic solid and fail to replicate intricate brain anatomy and the interaction between the CSF and the brain. These deficiencies are addressed, as reported in Journal of Pediatric Neurology, thanks to more precise simulations that reveal that the fluid’s protection may last for only a single shake. The study was developed by researchers at New York Institute of Technology’s College of Engineering and Computing Sciences.

“One instance of abusive head trauma could include as many as 80 shakes. Our findings demonstrate that the cerebrospinal fluid is only ‘designed’ to protect the brain for the first shake,” said lead author Milan Toma, Ph.D., assistant professor of mechanical engineering. “By considering simulations like these, clinicians can better predict the short- and long-term effects of abusive head trauma and more accurately assess the victim’s health.”

The researchers replicated the fluid’s cushioning effect for multiple cycles. In the first shake, CSF traveled to the sites of hyperextension and hyperflexion, providing the anticipated cushioning effect. However, during hyperflexion on the second shake, the fluid did not have enough time to reach the affected areas. In other words, following the first shake, the CSF was unable to prevent the brain from colliding with the skull, suggesting that the fluid offers no protection at repeated frequencies.

“Even when a baby is shaken at the lowest frequency, one shake is already too many,” said Alfonso Dehesa Baeza, an undergraduate mechanical engineering student at New York Tech and Toma’s co-investigator. “We hope that these surprising revelations help raise awareness among clinicians and caregivers, and prevent future incidents of abusive head trauma.”

“The known incidence of AHT in children less than a year old is approximately 35 cases per 100,000. Unfortunately, AHT is not only often misdiagnosed, it is also under-diagnosed. This simulation allows a glimpse into the mechanism through which AHT occurs. Better knowledge of the brain and its response to trauma can help us to tailor treatment and possibly mitigate damage,” said Rosalyn Chan-Akeley, M.D., M.P.H, OB/GYN research program manager at New York-Presbyterian Queens Lang Research Center, who was also an author on the study.