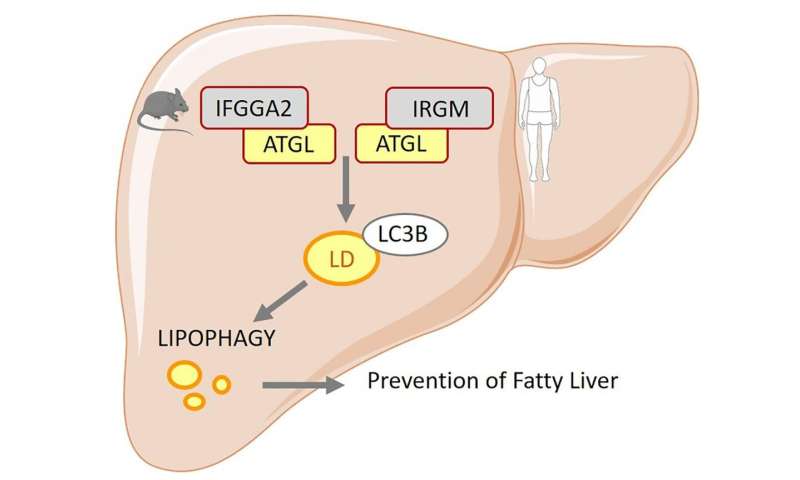 In Germany about 18 million people suffer from non-alcoholic fatty liver. The causes of this disease are manifold and include environmental as well as genetic factors. DZD researchers have now discovered new genes that play a role in the development of fatty liver. In humans and mice, respectively, the genes IRGM, Ifgga2 and Ifgga4 are responsible for the production of regulatory proteins of the family of immunity-related GTPases which counteract fat accumulation in the liver. However, a genetic variation leads to the formation of fewer of these proteins. The results have now been published in the Journal of Hepatology.

Non-alcoholic fatty liver disease (NAFLD) is the leading cause of chronic liver disease in Europe and the United States. In Europe about 20-30 percent of the population are affected. NAFLD is often associated with other diseases such as obesity, type 2 diabetes, high blood pressure (arterial hypertension) and a fat metabolism disorder (dyslipidemia). In addition to an unhealthy lifestyle with a high-fat, high-sugar diet and lack of exercise, a genetic predisposition is also responsible for the development of this liver disease. However, for this complex disease not only one gene but rather the interactions of different genes and epigenetic factors are responsible.

Researchers have now discovered a new family of genes that play an important role in preventing fatty liver development. In humans and mice, these genes produce regulatory proteins from the family of immunity-related GTPases that counteract fat accumulation in the liver. However, if there is a genetic modification, fewer proteins are formed. Studies show that the liver of patients with NAFLD and mice with fatty liver have significantly lower amounts of these proteins. The study, which has now been published in the Journal of Hepatology, was carried out by a team of researchers of the German Institute of Human Nutrition Potsdam-Rehbrücke (DIfE), the German Diabetes Center (DDZ) and Helmholtz Zentrum München—all partners of the German Center for Diabetes Research (DZD).

Using molecular markers and statistical methods—quantitative trait locus (QTL) analysis—genes that cause complex human diseases can be identified in mouse strains. For example, the research team discovered a region on mouse chromosome 18 that was associated with altered amounts of fat in the liver. If the genes Ifgga2 and Ifgga4 are expressed, proteins of the family of immunity-related GTPases are formed—in the mouse the proteins IFGGA2 and IFGGA4 and in humans the protein IRGM. These proteins increase a certain form of fat degradation and thus counteract the development of fatty liver.

The reason for a lower expression in mice with a fatty liver is a small genetic variation. “Due to the loss of only a single base in a gene sequence, which increases the expression of a certain gene, the two related proteins IFGGA2 and IFGGA4 are hardly produced in liver cells of mice that are susceptible to fatty liver,” said Professor Annette Schürmann, head of the Department of Experimental Diabetology at the German Institute of Human Nutrition Potsdam-Rehbrücke (DIfE) and spokesperson for the German Center for Diabetes Research (DZD). Patients with NAFLD also have significantly lower amounts of the corresponding protein (IRGM). As a result, the fat content in the liver can increase three to four-fold.

Proteins increase specific degradation of fat in the liver (lipophagy)

Functional studies have shown that an overproduction of immunity-related GTPases in liver cells or in the liver of mice, significantly reduced their fat content. “The reason for this is the induction of a particular form of autophagy that is specific for the degradation of fats and is therefore called lipophagy,” explained Dr. Wenke Jonas, who co-directed the study together with Professor Schürmann. Autophagy is a type of cellular disposal and recycling process through which the cell’s own components are degraded. The researchers have observed that after the uptake of fatty acids in liver cells, the immunity-related GTPases migrate to the lipid droplets. There they bind to an enzyme involved in fat degradation (adipocyte triglyceride lipase, ATGL) and ensure that a central protein of autophagy (LC3B) binds to the fat droplet. Due to the autophagy of lipid droplets, the amount of fat is reduced and thus the development of fatty liver is prevented.