The Zika virus, a disease from the Flavivirus genus, a member of the Flaviviridae family of viruses, causes sickness in about 1 in 5 of the people who become infected by it. In those 20%, the symptoms are generally mild and the disease is very unlikely to cause death.

It is also rare for a patient to require hospitalization. The virus affects both men and women and has also been found in babies born to infected mothers.

The virus comes from the same family of viruses as dengue fever, West Nile virus and yellow fever. At times it can be mistaken for one of the other viruses which can have similar symptoms.

Prior to the symptoms showing, the incubation period could be between two to seven days. The main symptoms are listed below. 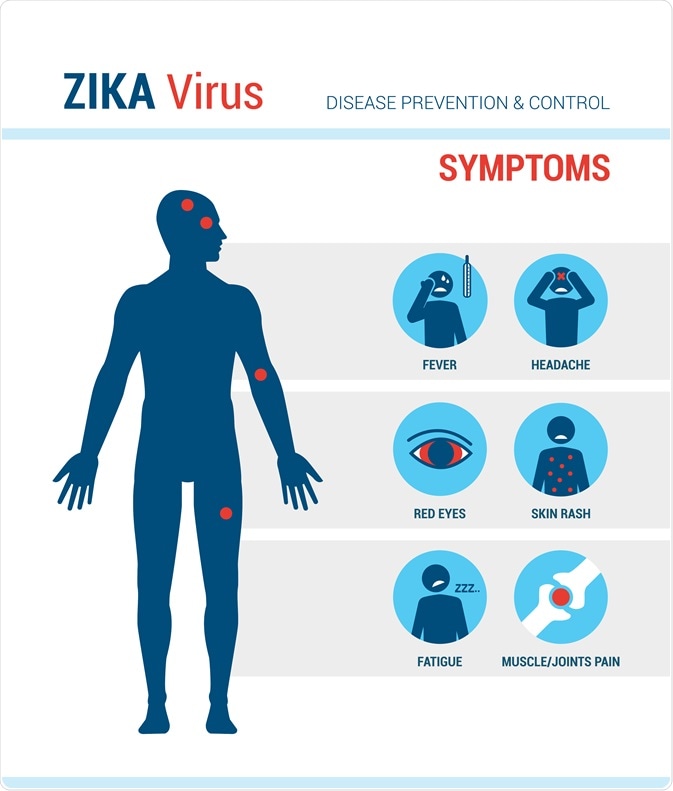 A person has a fever, also known as pyrexia, when their body temperature is higher than it should be. The temperature the patient would have to be considered to have a fever is over 37.5°C (99.5°F). Generally, the fever from the Zika virus causes a temperature up to 38.5°C.

The patient suffers from reduced urine and blood because of the increase in sweat from the body. To counter this, the patient needs to be rehydrated with water or other fluids. The person may also feel cold even though their temperature is rising. Ideally, the patient’s environment should also be kept as cool as possible.

Conjunctivitis is an inflammation of the surface of the eye which can cause redness, therefore the alternative name of red-eye. The Zika virus causes the viral version of this condition although it can be caused by bacterial infections as well. The eye waters, has stickiness and feels painful.

The fluid produced is infectious and so patients have to be wary of spreading the infection to others around them. The eye condition cannot be treated with medicines used for the bacterial version but will clear up when the virus leaves the patient’s system. The disease does not affect vision.

In addition to conjunctivitis, some patients experience eye pain as an effect of the infection.

The Zika virus rash includes red spots that are flat with some bumps (maculopapular). Sometimes the individual bumps can be grouped tightly together appearing as a larger rash in one place.

They can either be morbilliform (similar in look to measles) or scarlatiniform (similar to the rash in scarlet fever). They disappear when the virus heals and do not leave any long-term effects. The rash tends to start on the face and move on to other areas of the skin.

The patient can feel very tired from the effects of the virus. Rest is recommended for anyone suffering from the symptoms of the disease.

The Zika virus can cause pain and swelling of the small joints in the fingers and feet. Some patients also experience muscular pain. 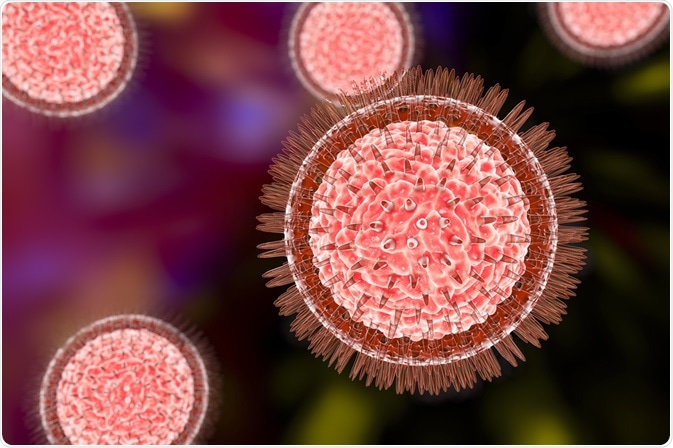 What to do about symptoms

Patients with the symptoms of Zika are advised to do all they can to avoid spreading the disease further. They should try to repel mosquitoes by the use of creams and lotions preferably including DEET. They should also cover up in light-coloured clothing covering their arms and legs. Where possible they should also use mosquito nets to shield themselves further from mosquitoes .

As well as these precautions, patients should try to get rest so that they can clear the disease more quickly and keep up their fluids to avoid dehydration due to the fever.

Those with conjunctivitis could spread the virus if they touch their infected hands with their bare hands and do not wash them afterwards. The fluid running from their eyes is potentially infectious.

In addition, there are reports that the disease may be sexually transmittable. People who have caught the virus in a tropical region and returned to a climate not known to have outbreaks of the Zika have passed it on to partners who have never left the country.

Patients should avoid sexual contact until the virus is confirmed to have cleared their system. Other people who have been to the region and have shown no symptoms should use condoms as a precaution for a period of time as the infection only shows signs in one in five people.

Deborah holds a B.Sc. degree in Chemistry from the University of Birmingham and a Postgraduate Diploma in Journalism qualification from Cardiff University. She enjoys writing about the latest innovations. Previously she has worked as an editor of scientific patent information, an education journalist and in communications for innovative healthcare, pharmaceutical and technology organisations. She also loves books and has run a book group for several years. Her enjoyment of fiction extends to writing her own stories for pleasure.