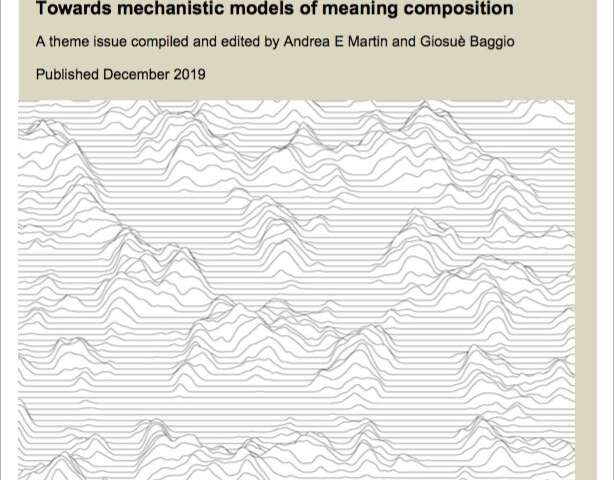 Meaning is central to language. But how do we combine the building blocks of thought and language to compose meaning? A special issue of the Philosophical Transactions of the Royal Society B, edited by Andrea E. Martin from the Max Planck Institute of Psycholinguistics and Giosuè Baggio from the Norwegian University of Science and Technology, brings together fifteen contributions from the fields of linguistics, cognitive psychology, neuroscience, and computer science to answer this age-old question.

When we hear the phrase ‘a pink banana,’ we can understand what it means and form the intended thought—even though bananas are typically yellow. This is because we compose the meanings of separate words into a new whole. “Meaning composition is the linchpin of cognition, necessary for explaining the creativity of human thought and communication,” says co-editor Andrea Martin, Group Leader at the Max Planck Institute and Principal Investigator at the Donders Centre for Cognitive Neuroimaging. “It is a capacity that sets us apart from other species and computational devices.”

So how does the mind ‘make meaning’? This question is not only a hot topic in linguistics, it has also long vexed philosophers. Do we mechanically combine language parts such as “Ann” (a part that linguists may call the “argument”) and “laughed” (the “predicate”) to arrive at an understanding of “Ann laughed”? Or does “Ann laughed” only make sense once we interpret this sequence of words in its context, integrated with our knowledge of the world?

One focus of the special issue is the neurobiology of meaning composition. Peter Hagoort, director of the Neurobiology of Language Department at the MPI and of the Donders Centre for Cognitive Neuroimaging, emphasises that people interpret language by using multi-modal cues from rich conversational settings, rather than just syntax to combine words. For instance, the combination “The finger fell in the soup” triggers negative emotions, even though the words themselves are neutral. In Hagoort’s model, based on neuroimaging methods such as MEG and fMRI, meaning is composed in a dynamic interaction between brain regions, such as the temporo-parietal and inferior frontal cortex.

A second focus is computational models. MPI’s Andrea Martin collaborated with Leonidas Doumas from the University of Edinburgh to model the neurophysiological mechanisms of meaning composition. Martin and Doumas show that previous models are not able to accurately capture human judgments. For instance, when people hear “fuzzy cactus” and “fuzzy penguin,” they treat “cactus” and “penguin” as similar—belonging to the set of fuzzy things—even when the separate words are judged as dissimilar. This shows that humans and artificial intelligence systems still have vastly different ways of representing meaning.

The final seven contributions are experimental studies. For instance, Jonathan Brennan from the University of Michigan and Andrea Martin use existing EEG data, recorded as adults listened to an audiobook of “Alice in Wonderland.” The authors show that brain waves differ depending on the number of phrases that are processed, revealing how the brain is actively computing meaning across linguistic units (words and phrases).

A large-scale ERP experiment by MPI’s Mante Nieuwland and his colleagues addresses the well-known N400 response that occurs in the brain as we process unexpected meanings. When we encounter “You never forget how to ride an elephant,” the brain shows a ‘surprise’ N400 signal at “elephant,” which is absent when the sentence has a more predictable ending (“You never forget how to ride a bicycle”). The authors argue that “bicycle” is not only more predictable than “elephant” (speeding up activation of the word’s meaning), it also makes the sentence more plausible (speeding up the integration of the word into the sentence)—given our knowledge of the world. The effects of predictability on the N400 occur before those of plausibility, again showing that the brain actively composes the meaning of both words and sentences in context.