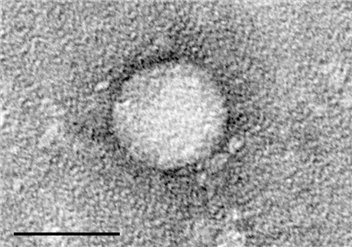 By discovering a trick the hepatitis C virus uses to evade the immune system, scientists have identified a new antiviral defense system that could be used to treat many virus infections, according to new research published today in eLife.

Viruses have many strategies to avoid immune system defenses. They often do this by hijacking the immune system’s own proteins. One immune protein that is frequently targeted by viruses, including HIV, hepatitis C, and the SARS coronavirus, is called cyclophilin A (CypA). Understanding how CypA is used by viruses could help scientists develop drugs that work against all of them, including the SARS-CoV-2 virus causing the COVID-19 pandemic.

In the experiments, the team used hepatitis C-infected human liver cancer cells with and without a functioning innate immune system. The innate immune system scans the body for potential threats such as viruses or bacteria and triggers a response. The scientists used a tool called a short hairpin RNA to selectively silence CypA and found that this stopped the virus from replicating only in the liver cells with a functioning innate immune system. They also showed that drugs called cyclophilin inhibitors help block the virus from co-opting CypA and prevent it from multiplying.

CypA is known to attach to an immune protein called protein kinase R (PKR), affecting its ability to detect viruses. So, the team used a gene-editing tool called CRISPR/Cas9 to cut out the gene for PKR in human liver cells with a working innate immune system. In cells without PKR, the cyclophilin inhibitors were less able to stop the virus from reproducing. This happened because PKR was not there to identify the virus and trigger antiviral defenses.