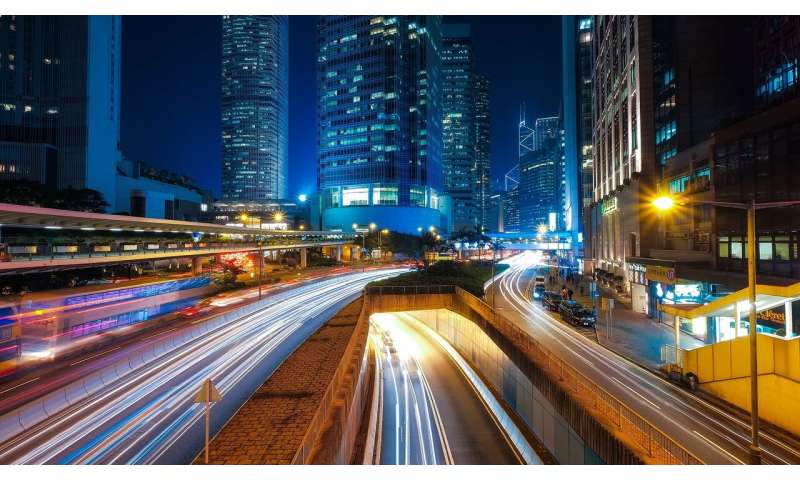 It’s not just health, social and economic consequences from COVID-19 that have impacted the world. Travel behavior also has been significantly affected. Using statewide traffic data from the Florida Department of Transportation (FDOT), a study demonstrates the drastic changes in human behavior during the onset of the pandemic. With more than 20 million residents, Florida was selected because of its enormous diversity and unique demographic and commercial characteristics.

Researchers from Florida Atlantic University, Embry-Riddle Aeronautical University, Louisiana State University, and the University of Hawaii, analyzed highway volume data as a representation of personal activity and interaction. For the study, published in the journal Natural Hazards Review, they used same-day traffic volumes for March 2019 and March 2020 across Florida to examine the chronological relationship of key governmental requests for public isolation and travel limitations in both time and space. They looked at differences in urban versus rural regions of the state over time as well as on different road functional classifications.

Analyzing same-day traffic volumes for 2019 and 2020 across Florida, results showed that traffic volumes by March 22, 2020, dropped by 47.5 percent compared to that same point in 2019. Moreover, traffic declined in March 2020 corresponding with the governor’s state of emergency declaration and school, restaurant, and bar closures. During the study period, the traffic decline followed similarly shaped trends with the increase in confirmed COVID-19 cases throughout Florida. Traffic decline outside of South Florida was statistically noticeable before that of South Florida. This finding indicates that people in the epicenter in South Florida continued to travel more early on despite being at a higher threat. However, traffic both inside and outside South Florida noticeably dropped after schools closed.

“In Florida, issuing the emergency declaration started the reductions in travel, but other actions such as school closings, shutdown of theme park operations, and the shuttering of bars and restaurants were associated with increased travel reductions,” said John Renne, Ph.D., co-author, professor, and director of FAU’s Department of Urban and Regional Planning within FAU’s Charles E. Schmidt College of Science. “Whether the reduction in travel demand was attributable to the closure of activities and trip generators or a function of increased fear arising from the increased lethality of COVID-19 requires further exploration.”

Findings also showed that urban areas across the state experienced significant decline several days before rural areas. Traffic on highways accounted for about two-thirds of the total volume and corresponding decline, but traffic decline on arterials was not consistently different until five days after freeways. This may indicate that people reduced travel for longer trip purposes, such as work trips, but continued to make local trips for nearly an extra week. Urban arterials experienced consistently different volumes a day after urban freeways and rural arterials had a four-day lag compared to urban arterials. 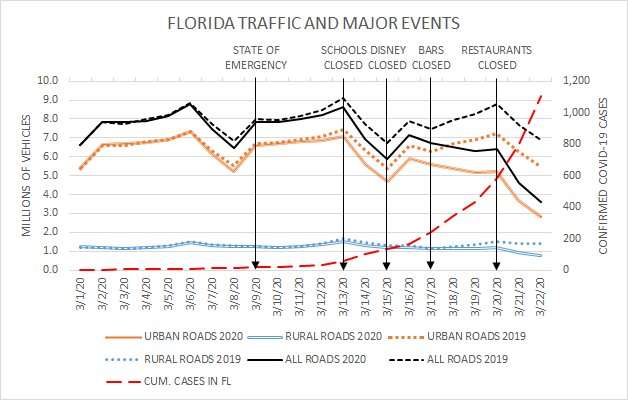 “Our analysis demonstrates that overall traffic volumes decreased significantly over the period with the greatest declines occurring later in the study period, suggesting that many factors including the start of spring break and decisions by local governments and employers contributed to the changes in travel behavior,” said Renne.

Data from this study support greater understanding of how to implement quarantine and isolation controls, adding to research on slowing movement of infectious disease. If the duration of the pandemic is long, there may be need for other operational strategies, such as the prepositioning of supplies, including equipment and other goods necessary for response and relief efforts or to ensure populations can comply with stay-at-home orders. Data on travel behavior also are relevant to recovery efforts and planning for the return to normalcy, training and overall preparedness, and longer-term community resilience.

“It would be interesting to determine if starting some of the actions earlier such as closing restaurants and bars would have resulted in steeper increases in trip reduction,” said Renne. “Clearly there was a lag between urban and rural areas and more investigation into reasons and motivations for the slower reaction is warranted. This knowledge could be useful in messaging especially if the protective action decision-making is transferable to other hazards and threats.”

Among the most important unanswered questions of this research pertain to the ultimate effect of reduced travel: was it successful in reducing sickness and fatalities from COVID-19? The researchers say, “Time will tell.” This will require more direct correlation between trip reduction and reduction in infection, transmission, and lethality for COVID-19.