The US reopening is coming, but ‘normal’ is still a ways off 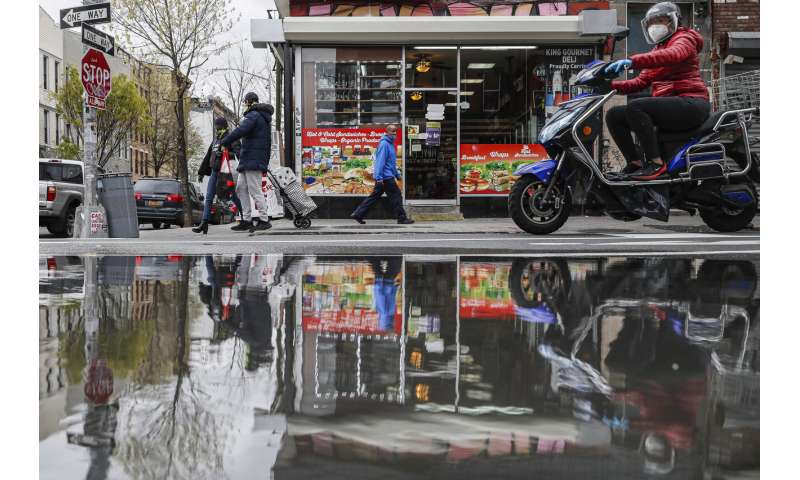 Everyone wants to know: When, oh when, will it go back to normal?

As some governors across the United States begin to ease restrictions imposed to stop the spread of the coronavirus, hopes are soaring that life as Americans knew it might be returning. But plans emerging in many states indicate that “normal” is still a long way off.

White House adviser Dr. Deborah Birx says social distancing will be with Americans through the summer. Louisiana Gov. John Bel Edwards warns of a “different way of life” until there is a widely available vaccine—maybe not until next year. New York Gov. Andrew Cuomo says: “There is no return to yesterday in life.”

From the beginning, the pandemic forced impossible choices: physical health or mental health? Economic well-being or medical safety? Most states joined the world and turned the dial down hard, closing shops and restaurants, factories and schools. Asking people to largely keep to their homes. Now, the dial is beginning to inch in the opposite direction.

In Georgia, Gov. Brian Kemp is pushing one of the most aggressive reopening plans in the United States. Barbershops, gyms and nail salons were allowed to reopen Friday, and dine-in restaurant service and movie screenings were freed to resume Monday—despite warnings that, without sufficient testing, the state could see a surge in infections. 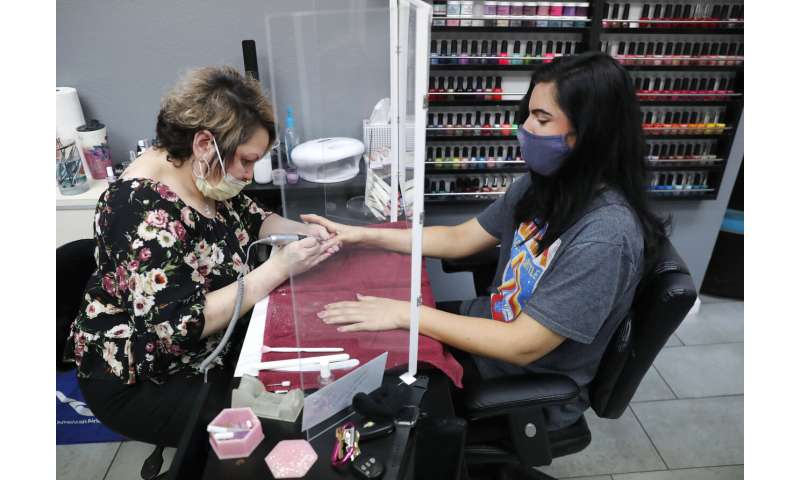 Even there, though, life was far from normal. Patrons went to restaurants with X’s on some tables, chatted across the room to one another and gave orders to servers whose faces were covered by masks.

In Alaska, restaurants are keeping logs with every customer’s name and phone number—in case they’re needed for contact tracing.

Draft guidance for reopening from the Centers for Disease Control and Prevention provided more evidence that “normal” would not be on the menu—at restaurants or anywhere else. No break rooms for employees and no field trips for school children, the guidelines recommended. Children should eat in their classrooms, and congregants should stay 6 feet apart in church.

In Maryland, Gov. Larry Hogan laid out a phased reopening. First small shops could open, and some outdoor recreation could resume, then perhaps restaurants and bars. Phase three, which the administration cautions it has no realistic time frame for reaching, would allow larger social gatherings and high-capacity bars, restaurants and entertainment venues could reopen. 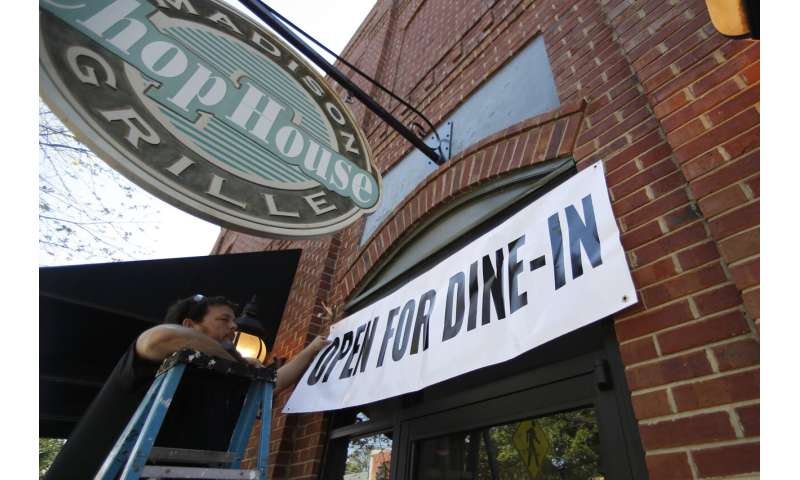 You know—the stuff that two months ago might have just been called “city life.”

Even with strict rules in place, it’s a delicate dance, as Dennis McKinley learned this weekend. He had planned to open two of the three branches of his restaurant, The Original Hot Dog Factory, for dine-in service in the Atlanta area. He reversed himself Monday after getting about 40 calls from politicians, community leaders and customers urging him to keep diners out.

“Ultimately, The Original Hot Dog Factory can’t make it without the community’s support, so I felt it was important to hold back and wait,” McKinley said.

What he calls community support, economists might refer to as confidence. Economies run on that, especially the American one, in which consumer spending accounts for 70% of all activity. When people are scared or times uncertain, they tend not to shell out. 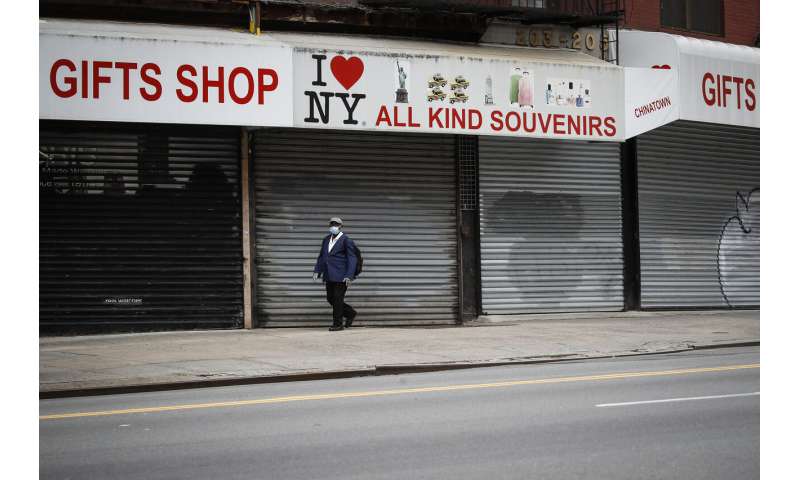 For most people, the new coronavirus causes mild or moderate symptoms. For some, especially older adults and people with existing health problems, it can cause more severe illness and lead to death. And while many point to a vaccine as the surest path to normal, public health experts see another way that’s no less daunting: millions more tests, 100,000 or more health workers to track and isolate those exposed to COVID-19, and a seamless data network to coordinate the effort.

The U.S. is far from implementing this. So in the absence of a vaccine or other reassuring measures—and in the face of a threat that is largely invisible —how will Americans believe that it’s safe to go out again?

“You know when a flood is there and when it’s gone,” says Steven Taylor, a professor at The University of British Columbia who wrote “The Psychology of Pandemics.” He predicts confidence will return when people see others hugging, shaking hands and crowding into elevators—and not getting sick. 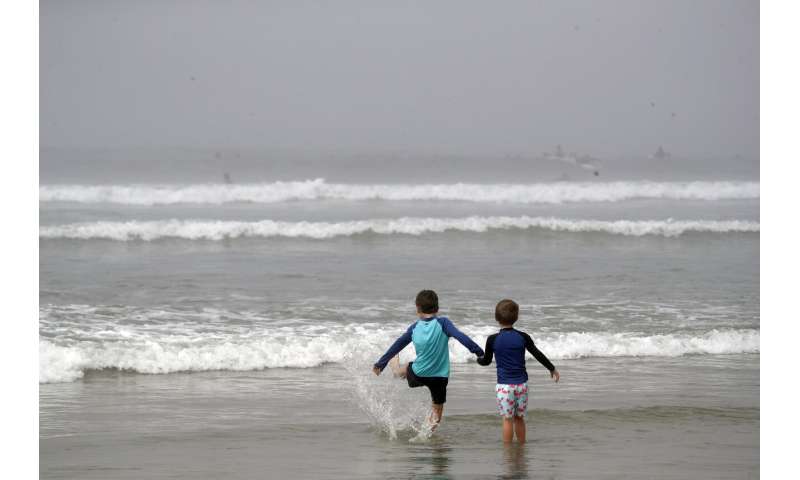 While Taylor believes most people will bounce back quickly, he notes that some calamities like the Great Depression have caused lasting changes to habits.

What will fade and what will survive after the coronavirus? Friday nights in restaurants where the tables are just a few inches apart, jostling for space in sweaty nightclubs, a peck-on-the-cheek hello? What about sleepaway camp and freshmen bunking together in dorms and the ever-shrinking seats in economy class?

Historian Francis Bremer can’t help but wonder whether the new normal will ever mean an end to “doing history from my dining room.” Like many others, the professor emeritus of history at Pennsylvania’s Millersville University has found that much can be done from a distance—in his case, through the rapidly expanding online availability of historical documents.

Clues lie in places that are weeks, even months ahead of the United States in this global experience. 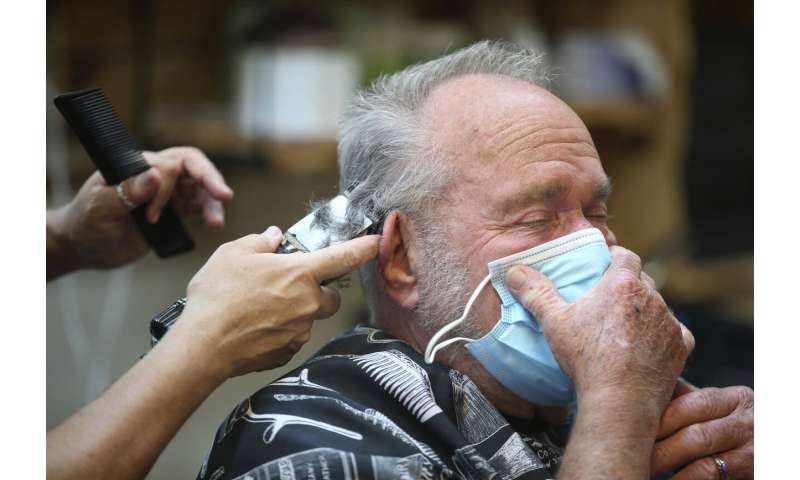 In China, where the virus emerged late last year, people proven healthy can generally move around within their own cities now—tracked by mobile apps and monitored with temperature checks in public. Germany has seen far fewer deaths than many of its European neighbors, but life remains curtailed: While it allowed smaller shops to reopen last week, it stuck to strict social-distancing guidelines and continued widely requiring face masks in public.

As spring blooms, Americans look to a whole new set of activities they hope they won’t be barred from. Californians flooded beaches and river fronts this past weekend as temperatures soared, prompting warnings that they might lose the few privileges they have.

But in Pennsylvania, the dial is turning the other way. Gov. Tom Wolf announced Monday he would lift some restrictions on outdoor recreation. Not just because the virus was starting to be contained, but also because people simply needed it.