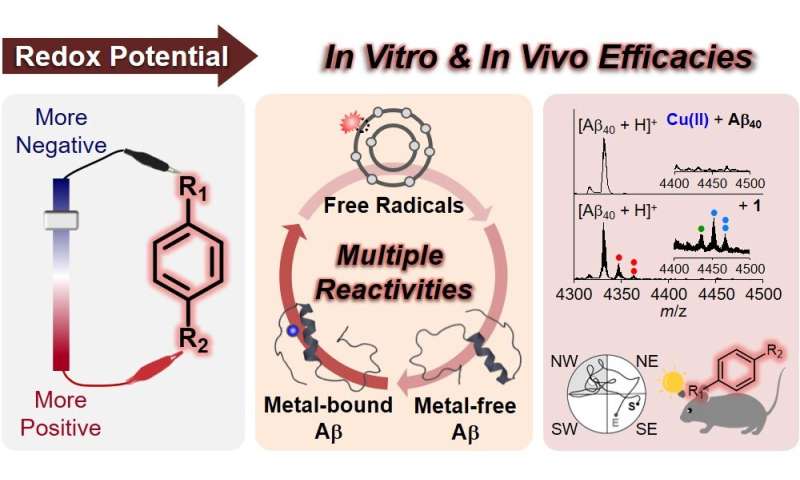 Sometimes the most complex problems actually have very simple solutions. A group of South Korean researchers reported an efficient and effective redox-based strategy for incorporating multiple functions into simple molecular reagents against neurodegenerative disorders. The team developed redox-active aromatic molecular reagents with a simple structural composition that can simultaneously target and modulate various pathogenic factors in complex neurodegenerative disorders such as Alzheimer’s disease.

Alzheimer’s disease is one of the most prevalent neurodegenerative disorders, affecting one in ten people over the age of 65. Early-onset dementia also increasingly affects younger people.

A number of pathogenic elements such as reactive oxygen species, amyloid-beta, and metal ions have been suggested as potential causes of Alzheimer’s disease. Each element itself can lead to Alzheimer’s disease, but interactions between them may also aggravate the patient’s condition or interfere with the appropriate clinical care.

For example, when interacting with amyloid-beta, metal ions foster the aggregation and accumulation of amyloid-beta peptides that can induce oxidative stress and toxicity in the brain and lead to neurodegeneration.

Because these pathogenic factors of Alzheimer’s disease are intertwined, developing therapeutic agents that are capable of simultaneously regulating metal ion dyshomeostasis, amyloid-beta agglutination, and oxidative stress responses remains a key to halting the progression of the disease.

A research team led by Professor Mi Hee Lim from the Department of Chemistry at KAIST demonstrated the feasibility of structure-mechanism-based molecular design for controlling a molecule’s chemical reactivity toward the various pathological factors of Alzheimer’s disease by tuning the redox properties of the molecule.

This study, featured as the “ACS Editors’ Choice’ in the May 6th issue of the Journal of the American Chemical Society (JACS), was conducted in conjunction with KAIST Professor Mu-Hyun Baik’s group and Professor Joo-Young Lee’s group at the Asan Medical Center.

Professor Lim and her collaborators rationally designed and generated 10 compact aromatic molecules presenting a range of redox potentials by adjusting the electronic distribution of the phenyl, phenylene, or pyridyl moiety to impart redox-dependent reactivities against the multiple pathogenic factors in Alzheimer’s disease.

During the team’s biochemical and biophysical studies, these designed molecular reagents displayed redox-dependent reactivities against numerous desirable targets that are associated with Alzheimer’s disease such as free radicals, metal-free amyloid-beta, and metal-bound amyloid-beta.

Further mechanistic results revealed that the redox properties of these designed molecular reagents were essential for their function. The team demonstrated that these reagents engaged in oxidative reactions with metal-free and metal-bound amyloid-beta and led to chemical modifications. The products of such oxidative transformations were observed to form covalent adducts with amyloid-beta and alter its aggregation.

Moreover, the administration of the most promising candidate molecule significantly attenuated the amyloid pathology in the brains of Alzheimer’s disease transgenic mice and improved their cognitive defects.