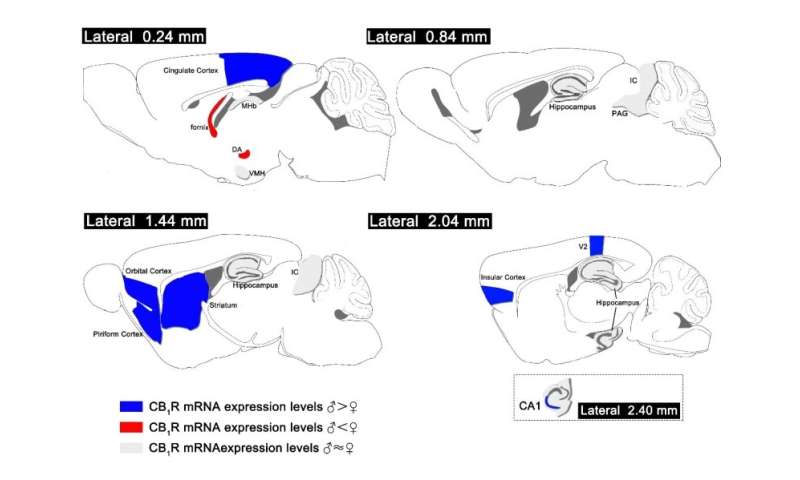 The cannabinoid 1 receptor (CB1R), the main receptor for cannabinoids and endocannabinoids (eCB), is the most abundantly expressed G protein-coupled receptor in the brain and is highly conserved in animal evolution. However, whole-brain mapping of CB1R expression in adult male and female mice had not previously been described in detail.

Recently, a research team led by Dr. Wang Feng from the Shenzhen Institutes of Advanced Technology (SIAT) of the Chinese Academy of Sciences demonstrated that CB1R mRNA expression displays a sexually dimorphic pattern in several regions in the adult mouse brain.

According to their current study published in Journal of Comparative Neurology on January 29, a systemic mapping of CB1R mRNA expression was conducted and compared for the first time in male and female adult C57BL/6J mice (a common inbred strain of laboratory mouse) brains.

The researchers found that the neocortex, medial habenula, striatum, hippocampus and cerebellum were enriched with CB1R mRNA signals.

It is plausible that the difference in CB1R expression in the brain contributes to sex differences in various phenotypes. For example, the striatum, which harbors a greater amount of CB1R positive cells in males, has been widely recognized as the main affected region in Parkinson’s disease, which has a higher incidence in males. The dorsal hypothalamus, with a female-biased number of CB1R positive cells, is associated with maternal behaviors.

More interestingly, CB1R mRNA seems to fluctuate with the estrus cycle in female brain regions, including the medial amygdala, basolateral amygdala and parabrachial nucleus, which has not been reported before.