‘This is NOT Covid 2.0’: Scientists calm fears about new Langya virus detected in China that first jumped to humans in 2018 and is infecting just a handful of people a YEAR

Top scientists have assured the public Langya virus is nothing like Covid after reports of the new pathogen in China sparked fears of a repeat of the 2020 pandemic.

Langya henipavirus — or LayV — was detected in 35 people in the country’s eastern Henan and Shandong provinces between December 2018 and mid-2021.

This means the virus has only infected only a handful of people each year since it was first identified in a 53-year-old female farmer.

It was revealed for the first time last week in a research paper published in the New England Journal of Medicine, sparking fears about another mysterious flu-like virus.

But Professor Francis Balloux, an infectious disease expert at University College London, said the current data suggested the virus ‘is not spreading fast in humans’.

He added there was little evidence LayV can spread easily between people, which means it has a low pandemic potential.

‘At this stage, LayV doesn’t look like a repeat of Covid-19 at all, but it is yet another reminder of the looming threat caused by the many pathogens circulating in populations of wild and domestic animals that have the potential to infect humans,’ he tweeted. 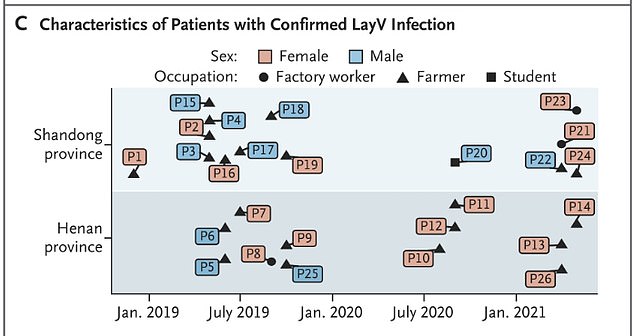 This chart shows the time and location of people who contracted fever while only ill with LayV. The first case was detected in December 2018 with dozens more found in 2019 and 2021 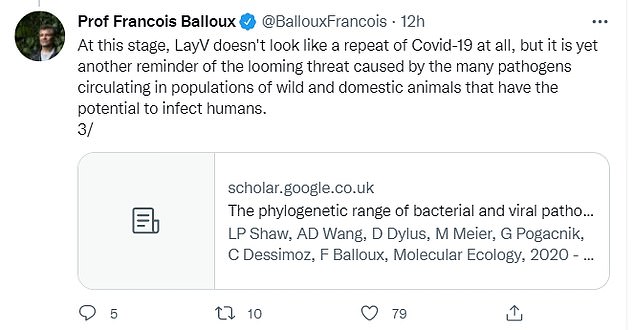 British virus expert Professor Francis Balloux of University College London said the virus does not look like a repeat of Covid, which is also believed to have originated in animals 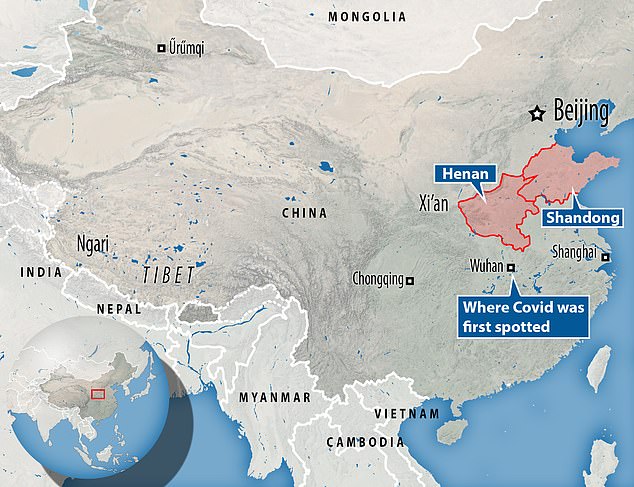 Chinese experts investigating the virus believe human cases are ‘sporadic’. They are still trying to work out if it can spread from person to person.

Shrews, a small mouse-sized mole-like mammal are currently believed to the main animal carrier of the virus.

Scientists tracking Langya tested a variety of small wild animals for the virus and found shrews had the highest positive rate, 71 of the 262 tested, about one in four.

The virus was also spotted in a small percentage of domestic dogs (5 per cent) and goats (2 per cent).

Concerns over LayV were heightened because it belonging to group of pathogens called henipaviruses. Some members of this family of viruses kill up to 75 per cent of those they infect.

But the newly identified pathogen so far has only caused mild, flu-like symptoms in humans, such as fever, fatigue, cough, loss of appetite and muscle aches.

LayV sprung to international attention this week following a report of its discovery published by Chinese, Singaporean and Australian experts in the New England Journal of Medicine, published on August 4. 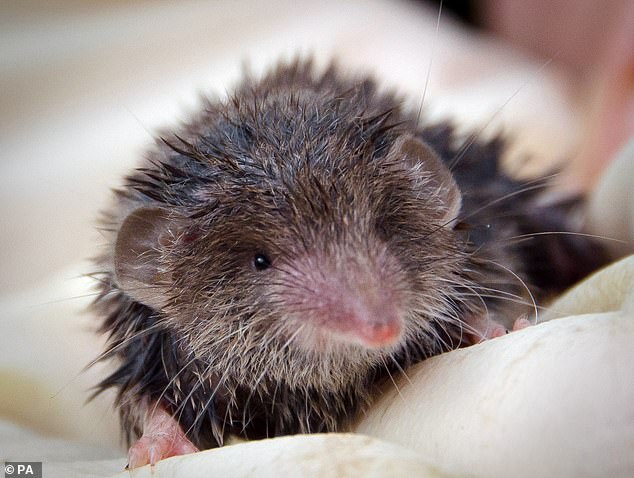 What is Langya virus?

What is Langya virus?

Langya virus is a henipavirus that has been spotted in humans for the first time in China.

It belongs to the same family as the Nipah virus, which is a deadly pathogen that is usually found in bats.

Experts believe Langya was passed on to humans by shrews, a small, mole-like mammal.

Where was it spotted?

The virus has infected 35 people in Henan and Shandong provinces in the East of the country between December 2018 and mid-2021.

What are the symptoms?

The most common symptom suffered was fever, with all people infected coming down with a temperature.

Should I be worried?

None of the Langya cases have so far resulted in people dying, although patients have been left with flu-like symptoms.

There has been no evidence of human-to-human spread so far, although Taiwanese authorities have set up new testing to monitor its transmission.

The first cases were spotted before January 2019 and have only been sporadic since.

Of the 35 patients with suspected infection, 26 (74 per cent), tested positive solely for the virus.

The rest were also infected with an additional virus that may have contributed to their symptoms.

The majority of confirmed patients were farm workers, with the remainder factory workers, and one student.

Writing in the study, they said:  ‘There was no close contact or common exposure history among the patients, which suggests that the infection in the human population may be sporadic.

‘But our sample size was too small to determine the status of human-to-human transmission for LayV.’

The most common symptom suffered by Langya patients was fever, with all people infected coming down with a temperature.

Around 35 per cent suffered liver problems while 8 per cent saw a fall in kidney function.

International response to LayV has so far been muted but on Sunday, China’s neighbor Taiwan announced it would start genome sequencing and strengthen surveillance measures for the virus, according to its national news agency.

He added they would also be working with the country’s Council of Agriculture to investigate native Taiwanese animals for similar diseases.

Genetically, LayV is most closely related to the Mojiang virus, another hepinavirus discovered in southern China which was linked to the death of three miners in 2012 and found in animals which lived in the caves they were working in.

Other hepinavirus include the Nipah virus a deadly pathogen that is usually found in bats.

Like Covid, Nipah can spread through respiratory droplets. But it is far more deadly, killing up to three-quarters of people it infects.

It has been listed as one of the viruses most likely to cause the next pandemic by the World Health Organization (WHO).

The brain-swelling virus was first discovered in Malaysia and Singapore in 1999, when 300 cases led to 100 deaths.

There is currently no Nipah vaccine approved for humans — but at least eight are currently being tested on animals, including one made by Oxford University.