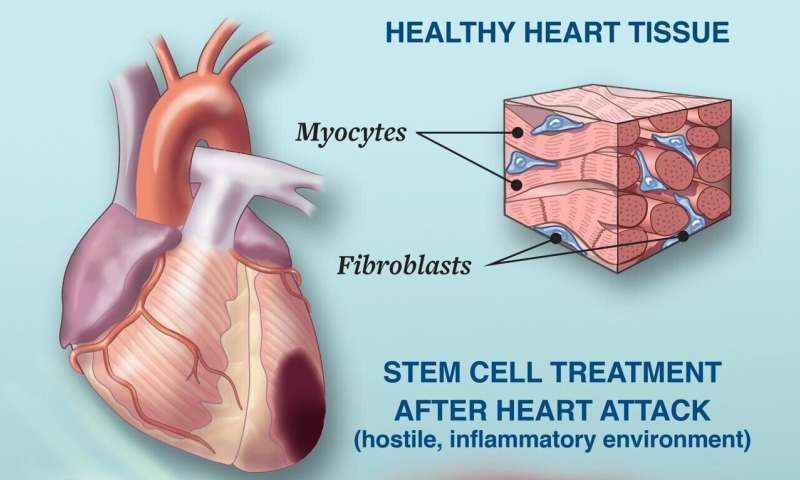 The enzyme—soluble epoxide hydrolase, or sEH—is a known factor in lung and joint disease. Now, it is a focus of heart-disease researchers as well.

The authors expect their work will lead to a new and powerful class of compounds that overcome the cell death and muscle thickening associated with heart failure—a common outcome of a heart attack or long-term cardiovascular disease.

The study, conducted in mice, is published in Stem Cells Translational Medicine. The work was led by cardiologist Nipavan Chiamvimonvat.

“The science of using stem cell treatments for heart disease has been full of promise but little progress,” Chiamvimonvat said. “The inflammation that accompanies heart disease is simply not conducive to stem cell survival.”

Prior studies show that stem cells transplanted to the heart experience significant attrition in a very short period of time.

“We think we’ve found a way to quiet that inflammatory environment, giving stem cells a chance to survive and do the healing work we know they can do,” said lead author and cardiovascular medicine researcher Padmini Sirish.

A significant and growing cardiovascular disease

Heart failure occurs when the heart no longer pumps blood efficiently, reducing oxygen throughout the body. Survival is around 45-60% five years after diagnosis. It affects approximately 5.7 million people in the U.S., with annual costs of nearly $30 billion. By 2030, it could affect as many as 9 million people at a cost of nearly $80 billion. 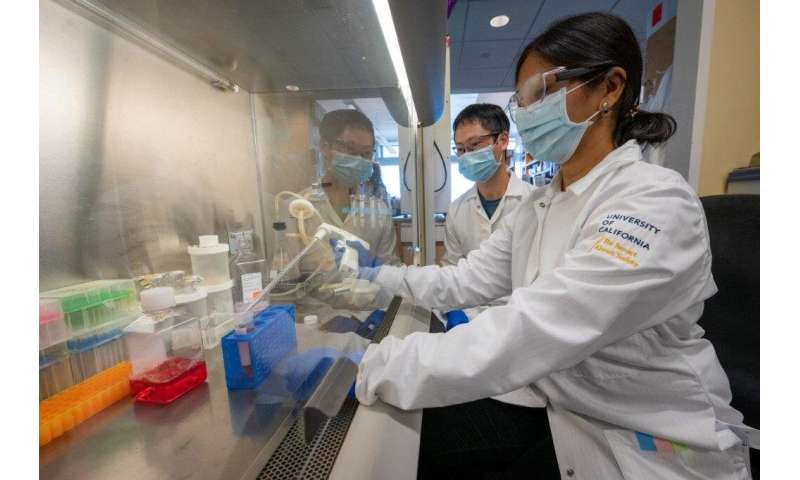 Chiamvimonvat often treats patients with heart failure and has been frustrated by the lack of effective medications for the disease, especially when it progresses to later stages. The best current therapies for end-stage heart failure are surgical—heart transplants or mechanical heart pumps.

She expects her outcome will lead to a two-part treatment for end-stage heart failure that combines an sEH-blocking compound with stem cell transplantation.

Chiamvimonvat and her team tested that theory in mice using cardiac muscle cells known as cardiomyocytes, which were derived from human-induced pluripotent stem cells (hiPSCs). A hiPSC is a cell taken from any human tissue (usually skin or blood) and genetically modified to behave like an embryonic stem cell. They have the ability to form all cell types.

The specific sEH inhibitor used in the study—TPPU—was selected based on the work of co-author and cancer researcher Bruce Hammock, whose lab has provided detailed studies of nearly a dozen of the enzyme inhibitors.

The researchers studied six groups of mice with induced heart attacks. A group treated with a combination of the inhibitor and hiPSCs had the best outcomes in terms of increased engraftment and survival of transplanted stem cells. That group also had less heart muscle thickening and improved cardiac function.

“Taken together, our data suggests that conditioning hiPSC cardiomyocytes with sEH inhibitors may help the cells to better survive the harsh conditions in the muscle damaged by a heart attack,” Hammock said.

The path to clinical trials begins

Chiamvimonvat and her team will next test the process in a larger research animal model to provide more insights into the beneficial role of TPPU. She also wants to test the process with additional heart diseases, including atrial fibrillation. Her ultimate goal, in collaboration with Hammock, is to launch human clinical trials to test the safety of the treatment.