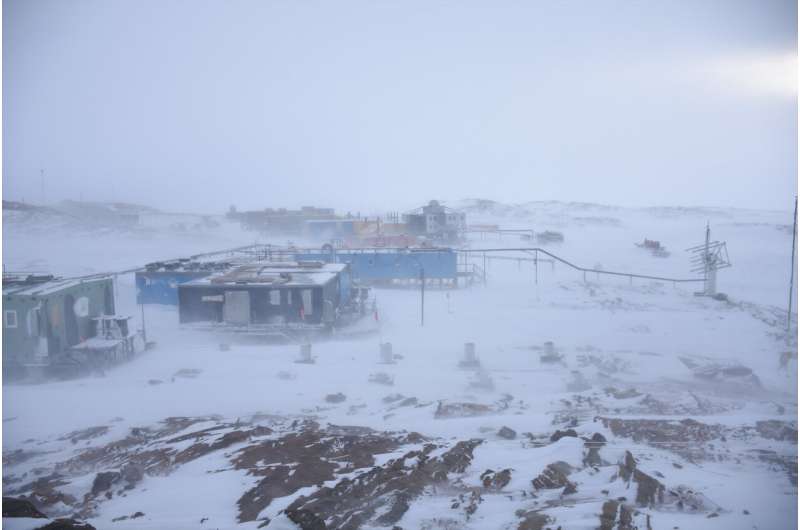 At the bottom of the world, there’s a small island about four kilometers off the coast of Antarctica. In summer, temperatures climb to freezing with uninterrupted daylight for two months. In winter, they fall to minus 40 degrees Celsius without a single sunrise for two months. It is isolated and desolate, uninhabitable to all humans—except for the Japanese Antarctic Research Expedition (JARE). Almost every year since 1956, a JARE team winters over on the island, staying in Syowa Station, from February to January to conduct various research projects. From 2004 to 2014, however, they were also research subjects themselves.

As part of a joint project between the National Institute of Polar Research at the Research Organization of Information and Systems (ROIS) and the Antarctic Psychological Research team at Kyoto University, a series of non-invasive psychological surveys were administered six times to five different wintering-over teams.

The results were published online on Feb. 22 in the International Journal of Circumpolar Health.

“An Antarctic wintering-over station is a unique environment as a small, isolated society facing the extreme margins of survival,” said first author Tomoko Kuwabara, professor emeritus in the Graduate School of Education at Kyoto University and professor in The Open University of Japan. “Although significant developments have been made in wintering-over operations, such as improved communications, it is still hard to stay an entire year in an Antarctic station, not only because of the cold, changes in daylight and exposure to UV rays, but also the isolation and the impossibility of escaping one’s small social group. These conditions make an Antarctic station a unique society that can reveal much about human nature.”

To better understand how team members’ psychological states changed throughout their wintering-over experience, the 172 participants were asked to complete a questionnaire designed to assess mood and to draw trees. Known as the Baum test, how a participant draws trees is thought to reveal much about their mental state and personality.

Some participants depicted trees reminiscent of Japan, such as cherry trees or even a tree in a home garden, while others drew palm trees. Many sketched apple trees.

The researchers noticed the team members split themselves in two distinct groups: Those who drew the same trees every time they were asked, and those who drew different trees.

“These results suggest two types of coping among individuals: one stabilizes life by maintaining a previous lifestyle, and the other flexibly adjusts to a new way of life,” Kuwabara said.

This assessment appeared to hold true across the questionnaires, but the researchers were unable to pinpoint any distinct personality traits that might make a person more or less suited to life at Antarctica.

“In general, wintering-over team members accepted their environment, and they did not act out emotionally or deny problems,” Kuwabara said, noting that many seemed to draw comfort and stability from continuing to hold onto internal relationships with their family and home. “It is expected that our survey will contribute to the understanding of other isolated groups, such as crews on the space station or in other future space travel, as well as to group management in everyday societies.”